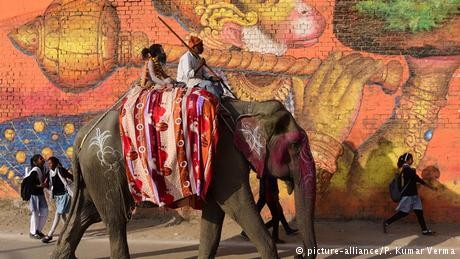 India's Kumbh Mela religious festival is set to begin on Tuesday, with some tens of millions of Hindu pilgrims congregating in the state of Uttar Pradesh.

The event will take place over the next 48 days and organizers have said they expect the spiritual festival to attract more than 100 million devotees.

Translating to "festival of the sacred pitcher," it is the largest religious gathering in the world and it was added to UNESCO's list of intangible human heritage in 2017. Kumbh Mela rotates between four locations every three years, based on astrological positions.

Prayagraj (formerly Allahabad) is the location of this year's festival, where the confluence of the Ganges and Yamuna rivers, along with the mythical Saraswati rivers, is considered holy.

Hindus believe that bathing there during the Kumbh helps cleanse sins and brings salvation.

Read more: How India's sacred cows are creating havoc on the streets

Naked, dread-locked holy men smeared in ash and sadhus wearing saffron robes will wander the crowds and offer blessings to pilgrims who make the trek from various parts of the country to take part in the ritual dip.

Some 30,000 police have been deployed to oversee crowds for the huge event and to prevent stampedes, which have marred Kumbh gatherings in the past.

Pilgrims will camp out across a sprawling zone that the city has designated for the festival, which will have restaurants, roads and marketplaces along the river.

India's Hindu nationalist-led government has paid particular attention to the festival this year. The state has spent unprecedented sums on the Kumbh, as part of a strategy to focus on the country's majority Hindu population on the eve of a general election this year.

The Uttar Pradesh state government, which is led by a Hindu priest, has also heavily promoted this year's Kumbh. His face and that of Prime Minister Narendra Modi appear on posters at the entrance to the Kumbh, and throughout the 3,200-hectare (7,907-acre) fairgrounds, touting government programs for the community.

"The vision of the government was to make sure that the Indian heritage, the Indian culture, the Kumbh heritage which actually personifies what India is, is shown to the entire world," said Vijay Anand, an Indian civil servant and the head Kumbh official.

The historic city of Allahabad was also renamed to Prayagraj in October by the Uttar Pradesh government. The move sought to replace the centuries-old Muslim moniker with an ancient Hindu title.