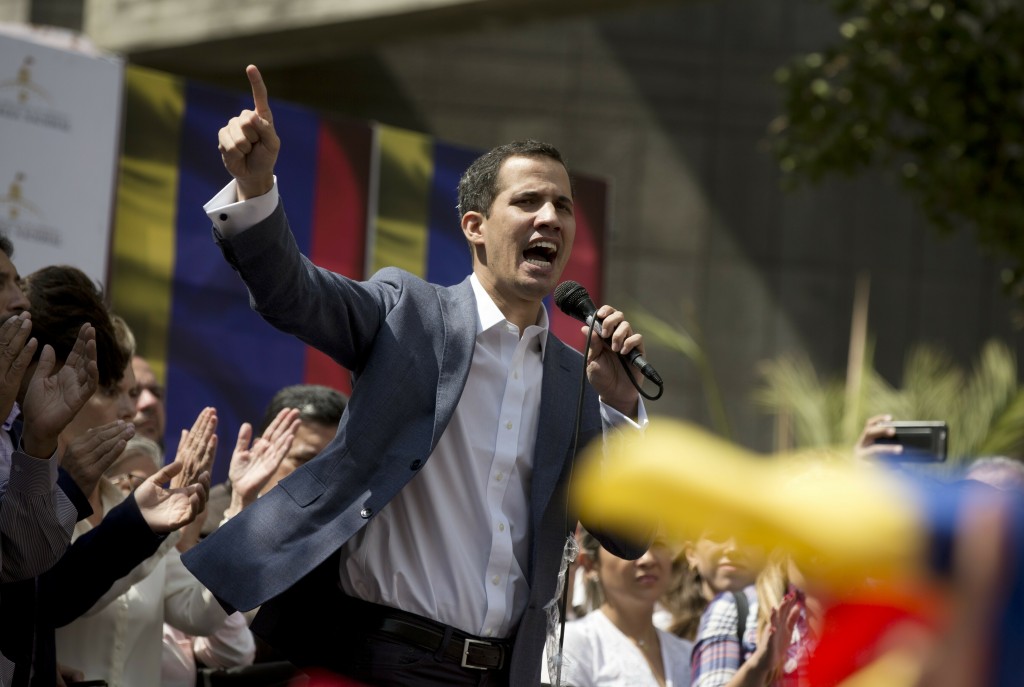 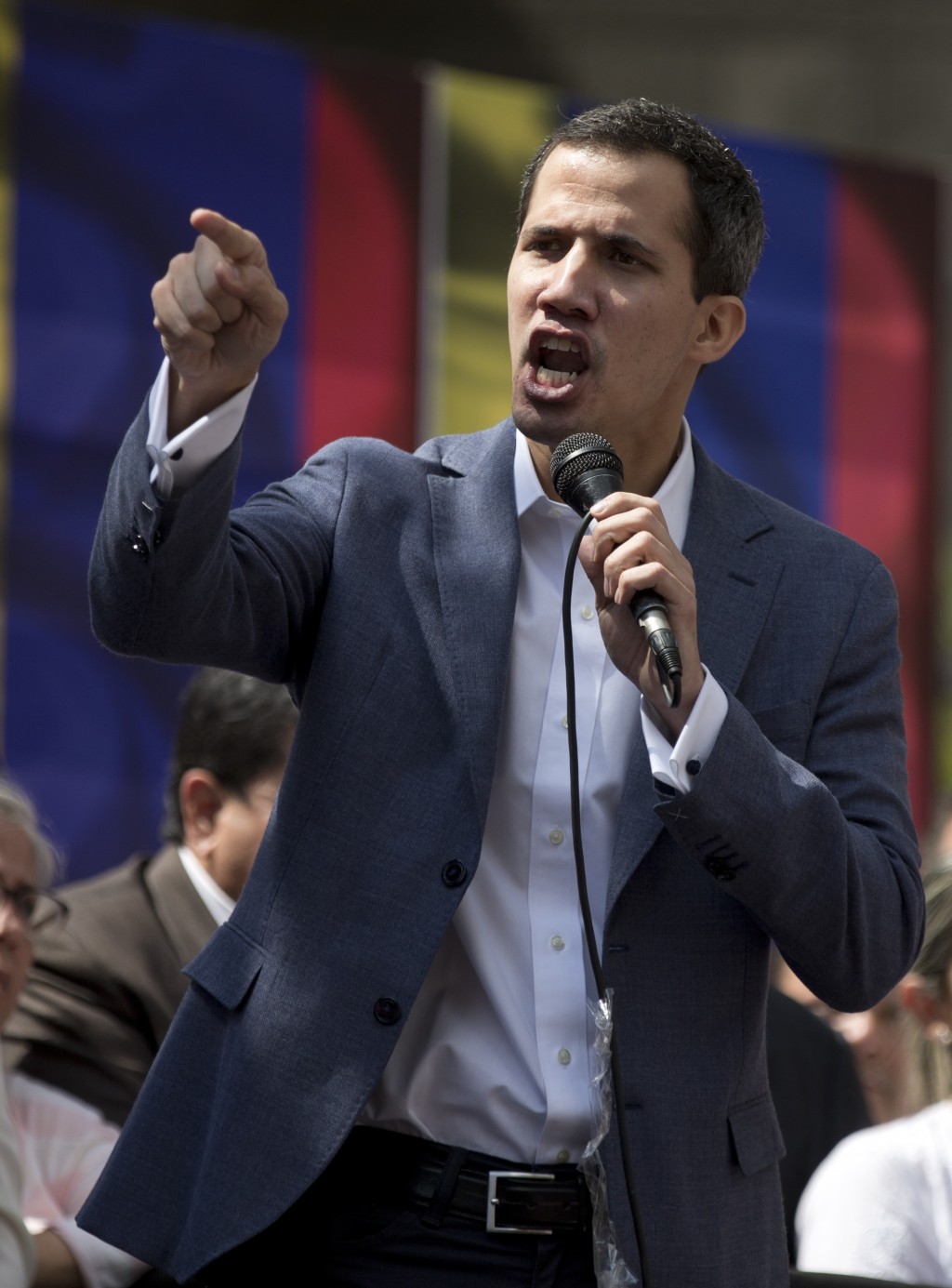 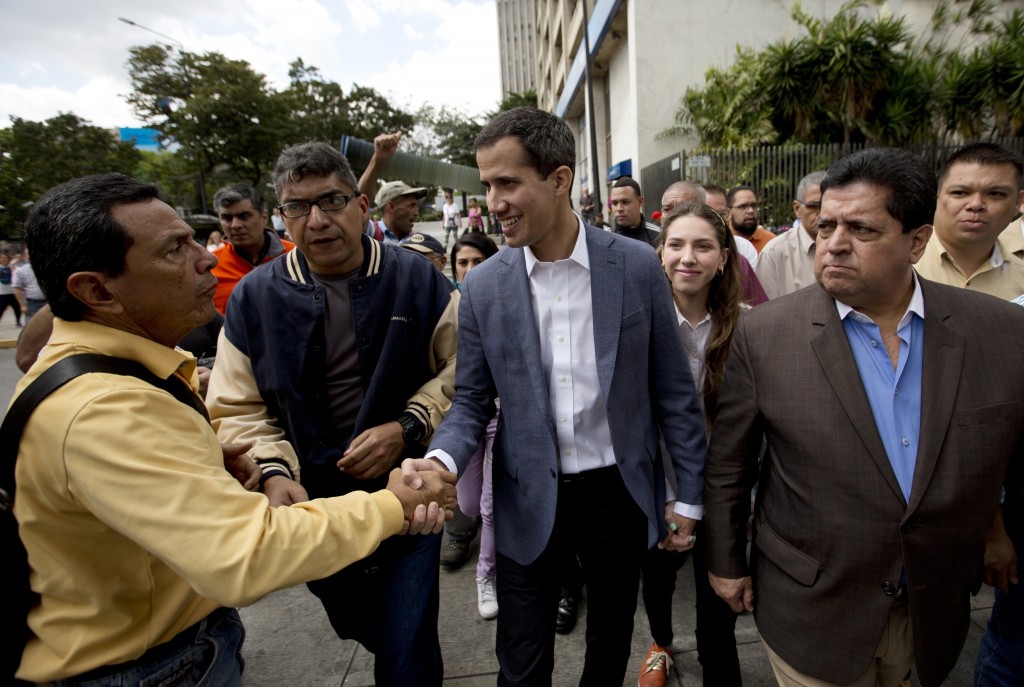 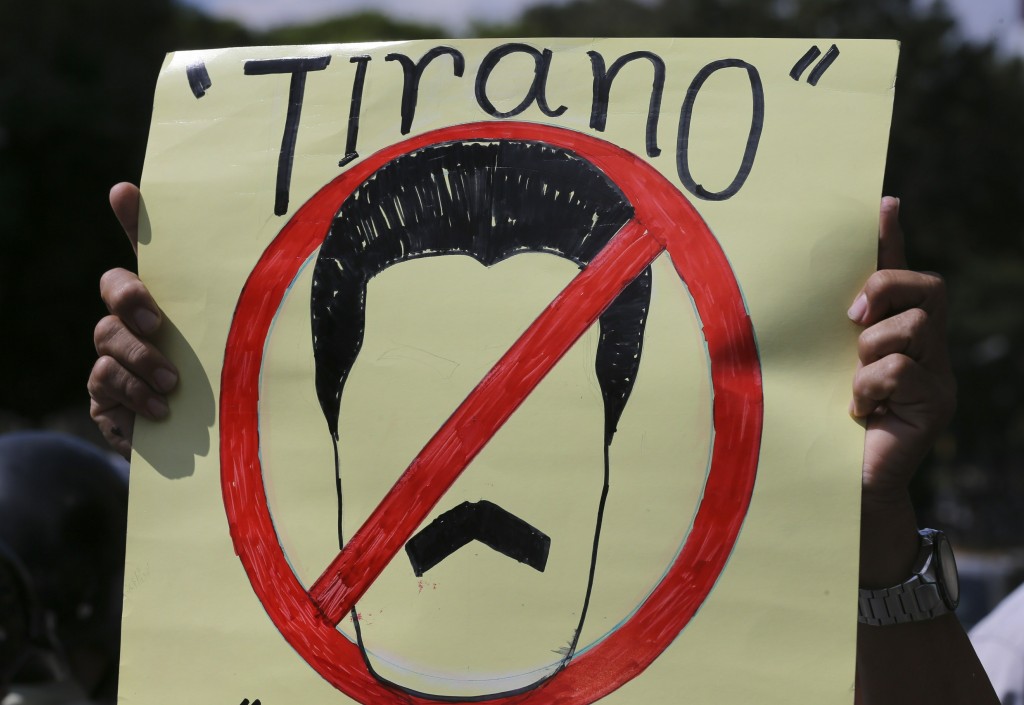 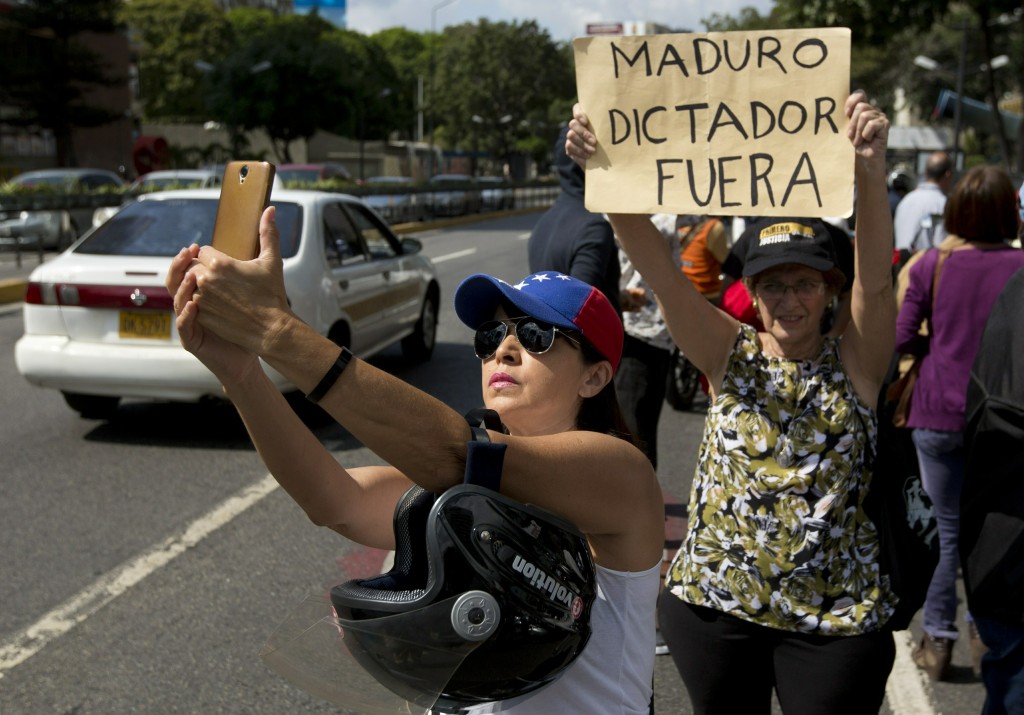 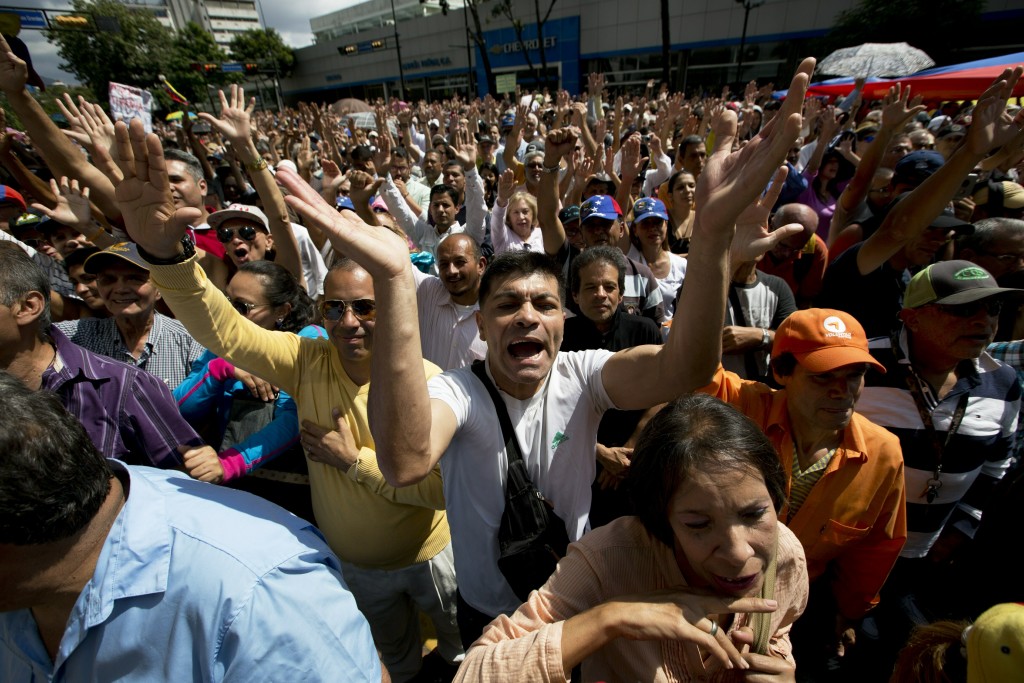 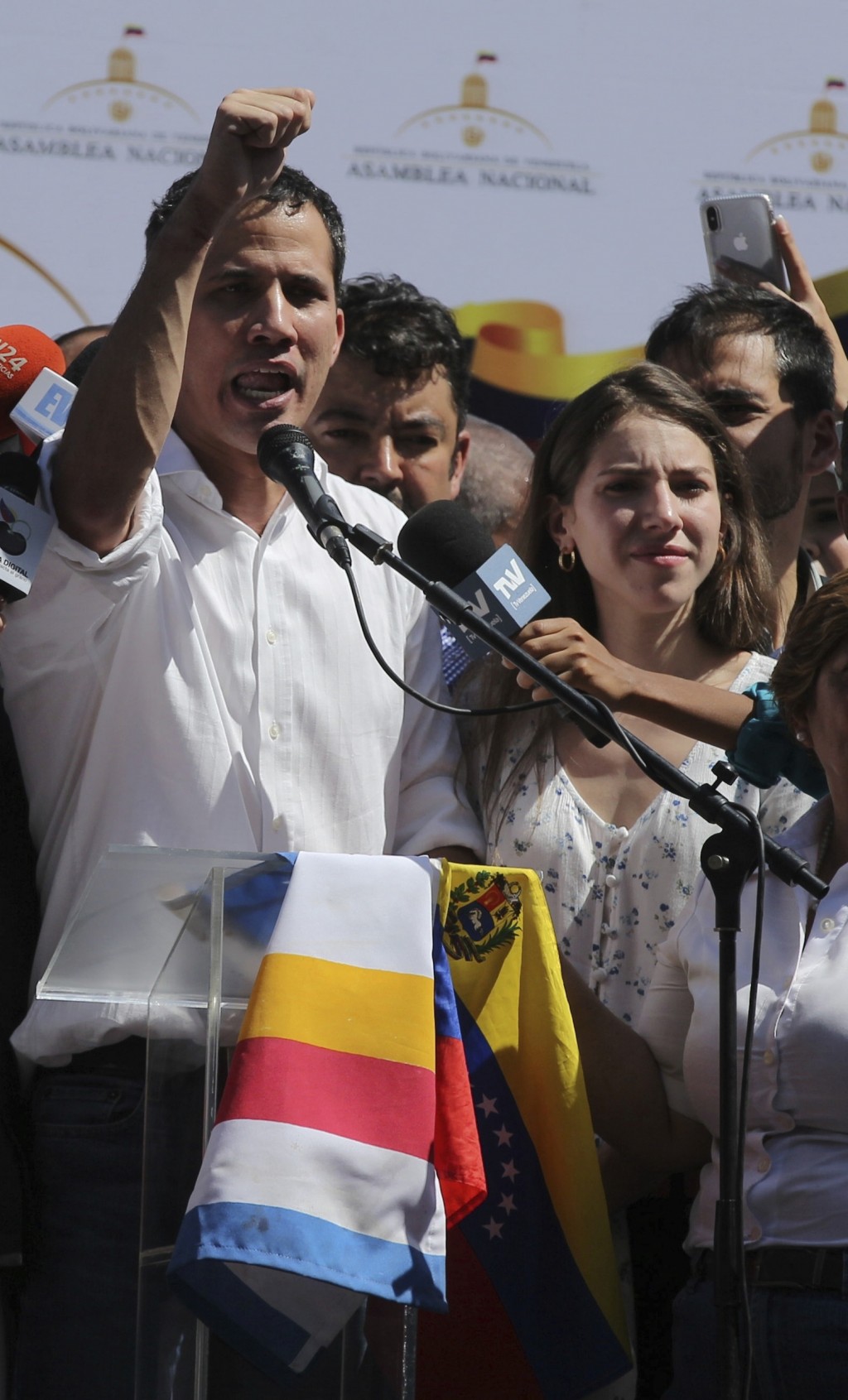 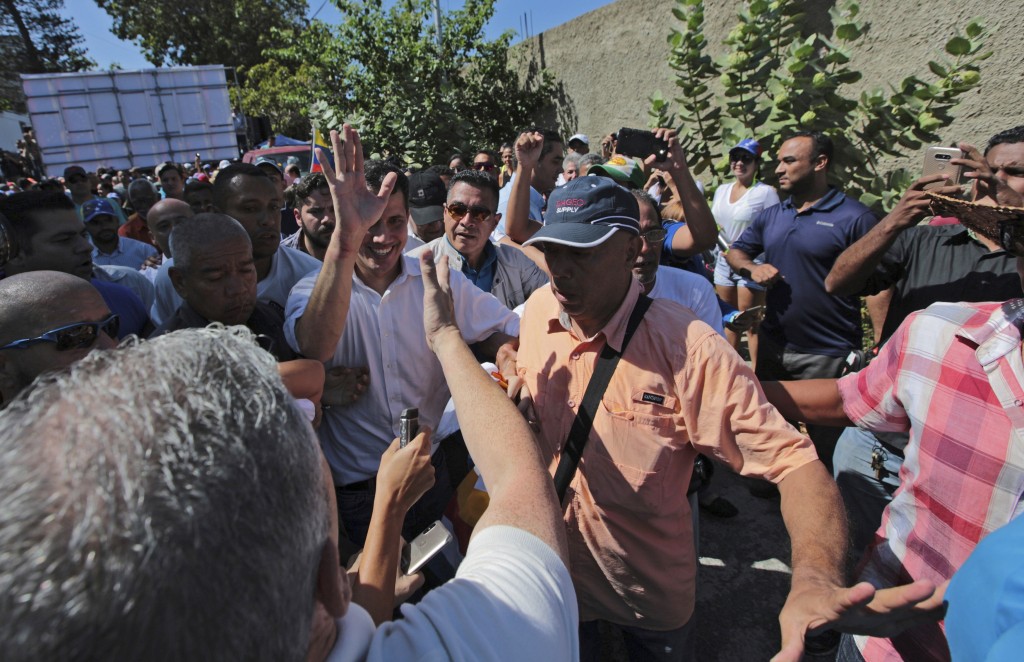 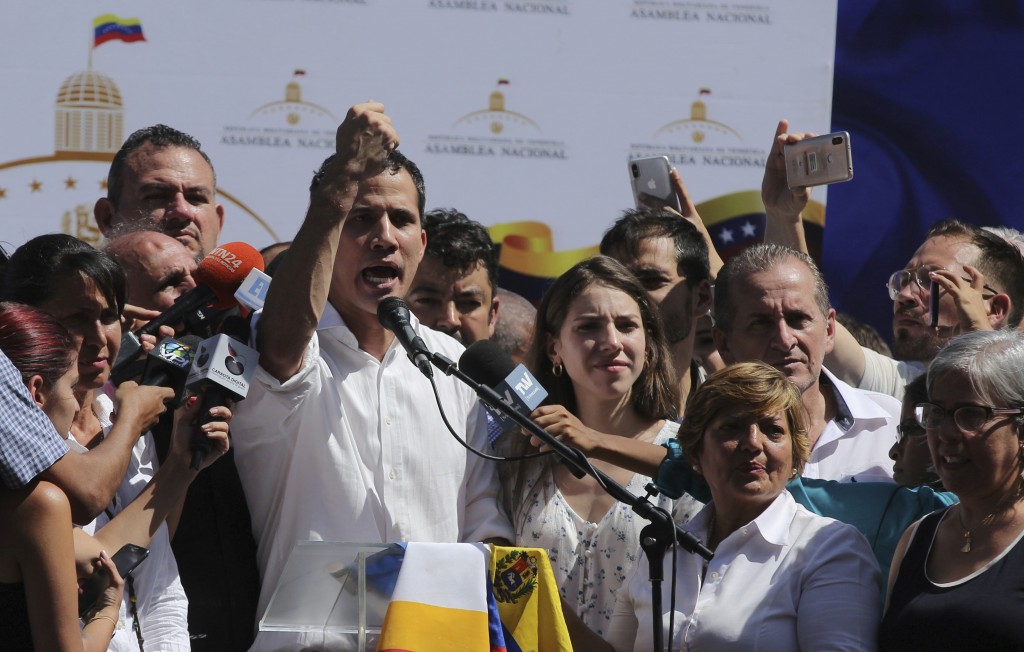 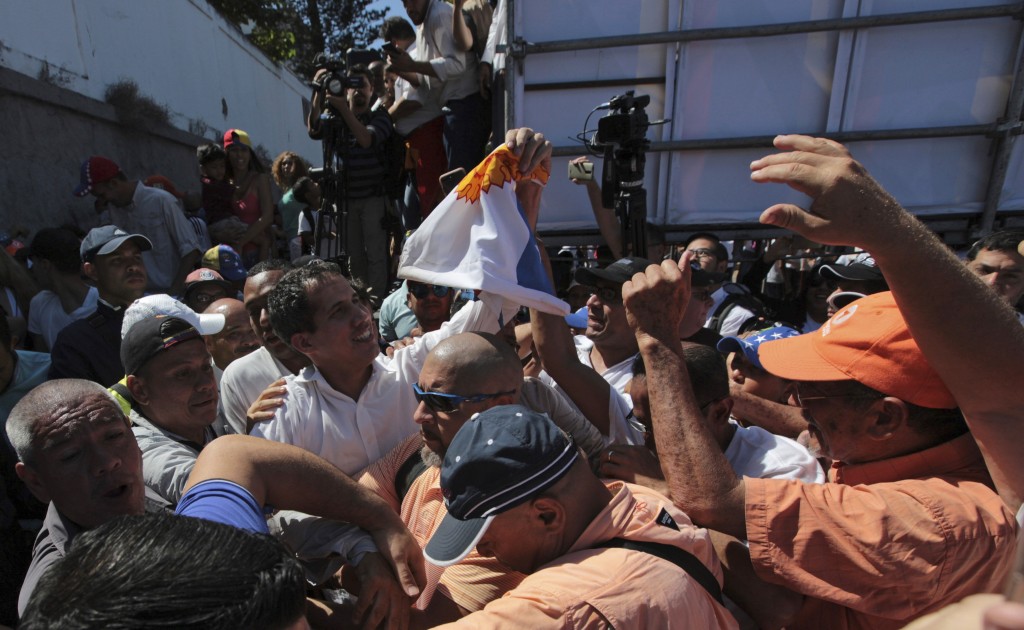 CARACAS, Venezuela (AP) — When Venezuelans rang in the new year, few in the crisis-wracked nation had even heard of Juan Guaido.

Two weeks later, the young backbench lawmaker has emerged as a key power broker as he leads the opposition-controlled congress in a high-stakes standoff with socialist President Nicolas Maduro, who is increasingly seen as a dictator both at home and abroad.

"Guaido for president!" people shouted Friday at the largest street rally in over a year to take on Maduro, eagerly waiting for the fresh-faced 35-year-old to speak. "Out with Maduro!"

As Venezuela's economic crisis deepens, with masses fleeing the country to escape runaway inflation on pace to surpass 23 million percent, many are desperate for a new leader to rescue the once-wealthy oil nation from two decades of socialist rule.

Dozens of countries, including the United States, denounced Maduro as illegitimate as he took the oath Thursday for a second, six-year term.

Into that void stepped Guaido.

An industrial engineer who cut his political teeth in a student protest movement a decade ago, he was elected to the National Assembly in 2015, and in its first session this year was named its leader.

Maduro in a Friday night TV address from the presidential palace made light of Guaido's newcomer status, feigning confusion over whether his name was "Guaido" or "Guaire," a notoriously polluted river that runs through Caracas.

"A lot of people in Venezuela are going to ask what is this 'Guaido'?" Maduro joked.

However, the perils of tangling with Maduro are no laughing matter. Shortly after he was elected head of the National Assembly, the rival constitutional assembly controlled by Maduro's allies threatened Guaido and others with an investigation for treason.

That's the same charge that landed in jail another up-and-coming opponent, Juan Requenses, following a drone attack on Maduro in August. Requenses has yet to have a public hearing, nor have prosecutors presented any evidence in the case.

Venezuela's feared SEBIN intelligence police pulled Guaido from his vehicle Sunday as he headed to a town hall meeting and briefly detained him.

The challenge for Guaido is to find a way to avoid being permanently arrested while keeping together a fractious opposition coalition, some of whose leaders are urging him to invoke an article of the constitution to declare himself interim president in direct defiance of the "illegitimate" Maduro.

Luis Vicente Leon, head of the Caracas-based polling firm Datanalisis, said such a radical approach is popular among the restive grassroots, exiles and their conservative foreign backers. But it won't necessarily loosen Maduro's powerful grip on Venezuela's institutions, oil wealth and especially the military — the traditional arbiter of political disputes.

"If he decides to do it, part of the opposition will say he's crazy, and if he doesn't, part will say he's a coward," Leon said. "Meanwhile, Maduro is waiting on the side to take advantage of the situation."

The architect of Guaido's meteoric rise is Leopoldo Lopez, Venezuela's most popular opposition leader, who is muzzled under house arrest and considered by government opponents to be a political prisoner.

At a time when many had written off the National Assembly, which was stripped of its last bit of power after the government set up the rival constitutional assembly in 2017, Lopez maneuvered behind the scenes for his Popular Will party to assume the presidency of the gutted legislature.

He then tapped Guaido, serving his first full term as a lawmaker, who rose to the helm of their party in Venezuela after eight more senior politicians sitting on Popular Will's national board were exiled since 2014.

Guaido has been a loyal acolyte of Lopez for years, standing beside him at a 2014 news conference when the activist announced a strategy of anti-Maduro unrest. What was called "The Exit" bitterly divided the opposition because it came less than a year into Maduro's presidency, when support for his rule was still strong.

The two talk a half dozen times each day, and not a single speech or move isn't coordinated with Lopez first, said one ally, who spoke on the condition of anonymity because they were not authorized to discuss the internal proceedings.

Because Guaido was unknown, Leon said that he hadn't even measured Guaido's approval ratings, like he does numerous other politicians. But he plans to start doing so this week.

Critics say Guaido lacks a political vision, pointing to his rambling debut speech as the legislature's president, which was full of rhetorical barbs aimed at the "usurper" Maduro but short on specifics on how to get out of the malaise.

Still, others see his youth and relative inexperience as breathing life into the beaten-down opposition, making Maduro's frequent diatribes that it is dominated by elitist relics from Venezuela's pre-revolutionary past harder to stick.

Guaido told The Associated Press in a recent interview he doesn't fear running into the same fate as his political allies. He pointed to scars on his neck caused by rubber bullets fired during 2017 street demonstrations against Maduro.

"I still have projectiles lodged here," he said.

Guaido has endured hardships for much of his life. At age 15, shortly after Maduro's mentor, the late Hugo Chavez, assumed the presidency and ushered in a socialist overhaul, Guaido and his family survived a torrential mudslide that killed thousands and left many more homeless in the port city of La Guaira, a short distance from Caracas and home to the capital's airport.

"We are survivors," he said. "If they take Juan Guaido prisoner, someone else will emerge, because our generation won't give up."

Like Lopez, the wiry Guaido prides himself an athlete and is a devotee of his hometown's Sharks — a perennial loser in the Venezuelan baseball league. He and his wife, a fellow activist, have a daughter named for Francisco Miranda, a precursor to Venezuelan independence hero Simon Bolivar.

While in congress, Guaido earned a reputation as a hard worker and consensus-builder while serving as the head of the comptroller commission that investigates allegations of government corruption.

Now he is drawing attention on the international stage. U.S. Secretary of State Mike Pompeo and the presidents of Colombia and Chile have each called him in recent days to offer support.

Luis Almagro, the head of the Organization of American States, went even further, recognizing him as Venezuela's interim president — a title Guaido himself has been careful to avoid embracing. "You have our support," Almagro tweeted.

And on Saturday, the U.S. State Department issued a statement explicitly calling for a new government in Venezuela.

But for the frontal assault on Maduro's authority to succeed, Venezuelans fearful of taking to the streets again after past uprisings ended in violent crackdowns and bitter divisions must be prepared to risk it all again.

To that end, Guaido urged during Friday's rally for Venezuelans to join him in a nationwide demonstration on the historically fraught date of Jan. 23 — the anniversary of a 1958 popular uprising that overthrew military dictator Marcos Perez Jimenez.

"The constitution gives me the legitimacy to carry out the charge of the presidency over the country to call elections," Guaido said. "But I need backing from the citizens to make it a reality."