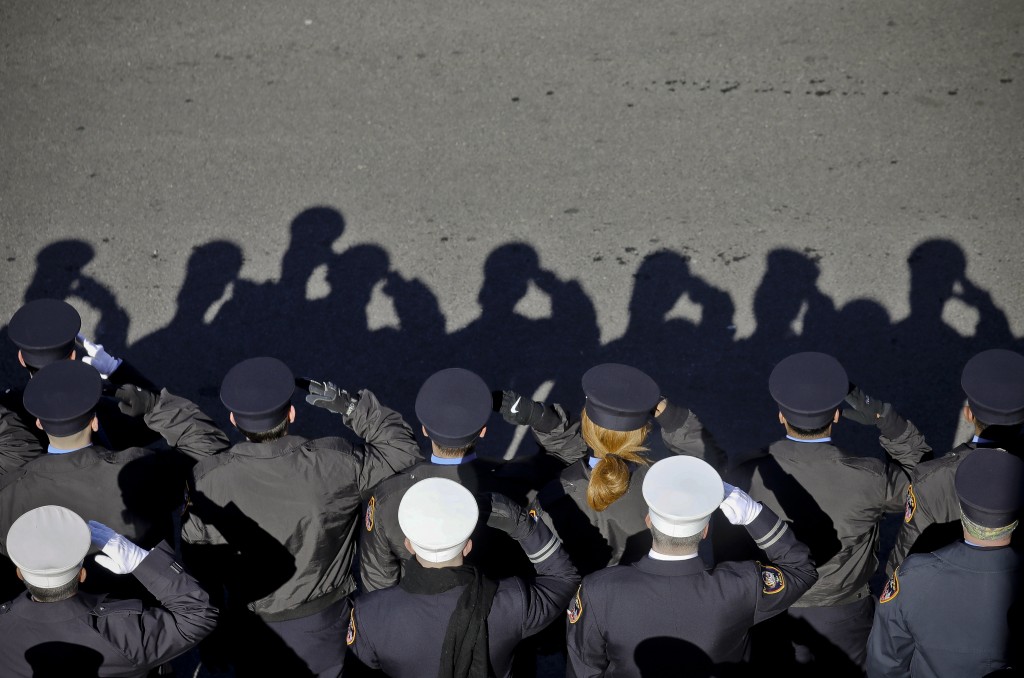 NEW YORK (AP) — A rookie New York firefighter who plunged to his death off a highway bridge while rushing to rescue two men trapped in an overturned vehicle had bravery "in his blood," Fire Commissioner Daniel Nigro said at his funeral Friday.

Before the service for Steven Pollard, thousands of firefighters from the city and around the country stood silently in dress uniforms on a street of red brick homes near the Good Shepherd Roman Catholic Church in Brooklyn's Marine Park, where he was raised.

The remains of the 30-year-old, the son and brother of firefighters, arrived in a casket atop a fire engine of Ladder Company 170 in the nearby Canarsie neighborhood, where he was assigned.

Late Jan. 6, the company responded to an accident on Brooklyn's Belt Parkway. Working in the dark on the cold, windy night, Pollard was running toward the vehicle that had flipped over when he fell into a gap between bridge spans and plunged about 50 feet (15 meters).

"On Sunday, what Steven Pollard saw was a fellow New Yorker, a fellow human being in a crumpled SUV," Mayor Bill de Blasio told mourners. "He did not hesitate; he saw someone in danger, someone who needed help, and he rushed forward and that instant, gave his life."

Friends at the funeral described him as a soft-spoken but fearless man.

"When it came to fire duty, Steve showed no fear," his colleague at Ladder 170, Timothy Klein, said, adding jokingly. "Now, on the other hand, dressing as Santa Claus absolutely terrified him."

Klein said he was with Pollard the night he died, and "Steven Pollard died not thinking of himself but trying to help others."

Pollard joined the Fire Department of New York only a year and a half ago and had just passed his FDNY probation "with flying colors," said Ladder 170 Capt. Jimmy Quinn.

Pollard's helmet was presented to his family.

For Pollard, the fire commissioner said, "bravery was in his blood": His father, Raymond Pollard Sr., retired after 32 years in the FDNY, and his brother Raymond Pollard Jr., is still serving after 11 years.

"This family will always be a part of our family," Nigro said.

Pollard was the 1,151st fire department member to die in the line of duty. The city has about 11,000 uniformed firefighters.