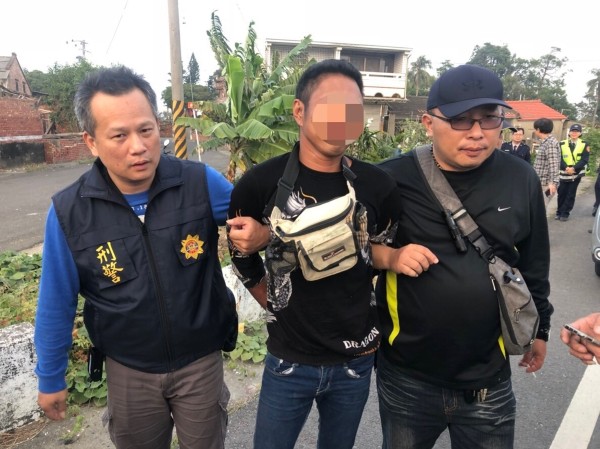 After being on the run for nearly two weeks, police arrested the prime suspect in an Indonesian migrant worker's death, which occurred during a drunken brawl in Taichung late last month. The suspect was apprehended by police in Chiayi County's Budai Township.

Early in the morning of Dec. 26, a 30-year-old Indonesian migrant worker, identified as Ali (艾力), joined fellow Indonesian workers in a bout of heavy drinking in the Lishan area of Taichung's Heping District. At around 3 a.m., Ali became embroiled in a heated argument with another worker.

Suddenly, Ali was struck in the back of the head by the other man with an unknown sharp object. Blood soon started to gush out of back of Ali's head near his left ear.

Three Indonesian workers then took Ali by van to Provincial Highway 7 where they left him by the side of the road, called for an ambulance, and fled the scene.

Firefighters placed Ali in an ambulance, which rushed him to the Lishan Health Center, but because his injuries were too serious to be treated at the clinic, he was transported to China Medical University Hospital. However, Ali died unexpectedly on the way to the hospital.

Police formed a special team to hunt down those responsible for Ali's death. An investigation found that the man who Ali had argued with and was allegedly stabbed by, was a fellow Indonesian migrant worker identified by the first name of "Vicky."

After questioning Vicky's friends, police were able to acquire his phone number and called him in an attempt to have him surrender. Vicky initially agreed to submit himself to questioning, but never appeared in the police station as promised.

The police then set up checkpoints on all major traffic routes and continued to search in the mountains for Vicky's whereabouts. On Jan. 4, police pinpointed the area in the mountains where Vicky was hiding, and at 4:50 p.m., they arrested him in Budai Township, Chiayi County.

Police found that in order to evade capture, Vicky had changed his hairstyle and cell phone number and worked at odd jobs to raise funds for his escape. Before his arrest, Vicky had scouted out Budai Harbor in Chiayi county, where he had planned to try to escape from the country, but police were still able to track him down before he was able make his getaway.

Vicky confessed to police that he had told his compatriots that he had stolen a scooter from Ali because he was "dissatisfied" with him. After a heavy bout of drinking in the early morning of Dec. 26, Vicky said that he remembered being slandered before by Ali and being treated differently by his former countryman and friend.

Vicky said he suddenly flew into a rage, pulled out a knife, and stabbed Ali. After completing questioning, police transferred Vicky to the Taichung Prosector's Office on suspicion of homicide.

According to Taiwan's Criminal Code, those found guilty of murder could face the death penalty, life in prison, or a minimum prison sentence of 10 years.