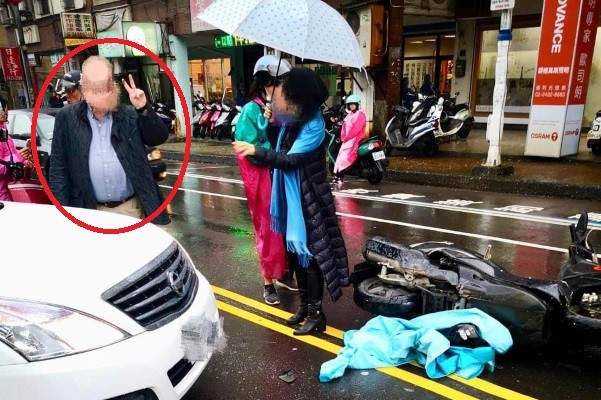 TAIPEI (Taiwan News) -- A foreign driver flashes the V sign and his wife allegedly assaults a witness after he plows into two scooter riders in northern Taiwan.

On Thursday, a female member of the Taiwanese Facebook group Breaking News Commune (爆料公社) posted photos of the aftermath of a car accident on Anle Road Section 2 in Keelung City. In the post, the netizen complains that the driver inappropriately flashed the V sign, and his wife allegedly assaulted her sister, who was a witness to the accident.

In the photos of the immediate aftermath of the collision, a foreign male can be seen looking at the camera and strangely making a V sign. In another photo, the netizen describes the female companion of the driver as staring "fiercely" at the camera.

Based on the photos, it appears that the foreign driver tried to make an illegal u-turn in the middle of a road marked with double-yellow lines, after pulling out from a designated public transport only zone.

"The driver at fault turned left without making a signal and hit two scooter riders causing them to go airborne, and yet admitted no wrong! My older sister was a witness at the scene of the car accident and he called for his female friend, who poked my sister with her umbrella and even kicked her."

The netizen said that she found her sister standing in front of the police station, and even though she did not utter a word, the crazed woman suddenly accosted her again. The woman, who the netizen later discovered was the foreign driver's wife, then allegedly demanded that the two victims of the collision apologize to her and her husband, or face a lawsuit for public insulting.

As soon as the post went online, many netizens were furious at the couple's behavior:

"I think they really have no class! That's so rude."

"Penalties overseas are very heavy, so he decided to come to Taiwan and do as he pleases?"

"It means that Taiwan's laws are not strict enough. If this happened in a country like Singapore, nobody would dare to act like this."

"You can make mistakes and be arrogant! The point is, does the foreigner have a driver's license?"