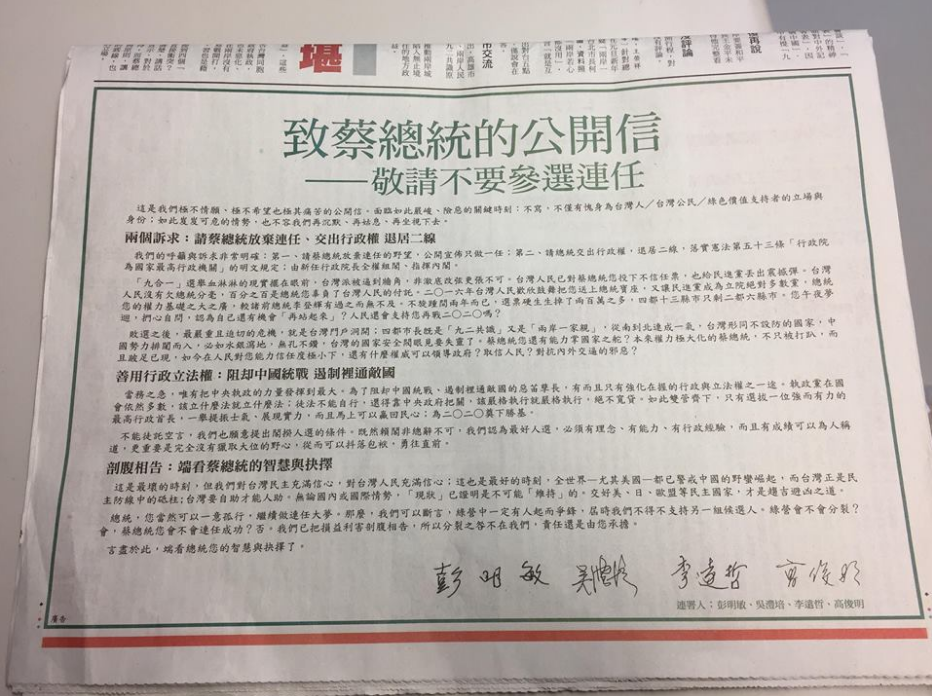 This is an open letter that we didn’t want, didn’t hope and caused us pain. Facing such a grave and negative key moment, not writing it we would feel guilty as Taiwanese / citizens of Taiwan / supporters of green values; such a dangerous situation does not allow us to keep silent, to be quiet, to remain seated.

Two requests: We ask President Tsai to give up running for a second term, to hand over executive power and retreat from the frontline

Our call and requests are very clear: First, we ask President Tsai to give up hope of running for re-election, and to declare publicly she will only serve one term; Second, we ask the president to hand over executive power, and retreat from the frontline, putting into practice the clear content of Article 53 of the Constitution, “The Executive Yuan is the highest executive body of the country;” allowing the new premier to form a Cabinet and direct it.

Looking at the results of the “nine-in-one” elections, the Taiwan faction was pushed against the wall, so thorough reform has become unavoidable. The people of Taiwan have already cast a vote of no confidence in President Tsai, and also thrown a surprise for the Democratic Progressive Party. The people of Taiwan do not owe the president anything, it’s you, the President, who have disappointed the people of Taiwan for 100 percent. In 2016 the people of Taiwan happily gave you the seat of the presidency, and allowed the DPP to become the majority party at the Legislative Yuan, so Mrs. President, the basis for your power is large and wide, much larger than that of former President Lee Teng-hui. In just two years, you lost more than 2 million votes, and out of four special municipalities or 13 counties and cities, only two special municipalities or six counties and cities are left. When you dream at midnight, and ask yourself, do you think you still have an opportunity to “stand up again?” Will the people still support you to fight on in 2020?

After the defeat, the gravest and most immediate threat is the opening of Taiwan’s gates. The mayors of four special municipalities support the “1992 Consensus” and “Two sides of the Taiwan Strait are one family,” and they form a front from the south to the north, turning Taiwan into a country without defense. The Chinese forces are preparing to enter, like mercury seeping into the ground, there is no hole they can’t enter, Taiwan’s national security is losing its footing. President Tsai, are you still able to lead the country? The president who started out with so much power has not only been beaten down, but has also turned into a lame duck, so now that the people’s trust in your ability is so small, what authority do you still have to lead the government? To win back the trust of the people? Fight the evil from inside and outside?

Use the executive and legislative power wisely: block China’s United Front tactics, stop the link between the inside and the enemy

The most urgent item is to expand the power of the central government to its maximum. In order to block China’s United Front tactics, and to stop the growth of the link between the inside and the outside enemy, the only way is to strengthen the executive and legislative power one holds. The ruling party is still the majority at the Legislative Yuan, so what law has to be legislated, it should be legislated; you cannot do it all by yourself, you still have to rely on the central government; what needs to be executed severely needs to be executed severely without mercy. Under these two conditions, the only way is to select a strong and powerful chief executive, to boost morale, show real power, and win back public support immediately to lay the foundation for 2020.

We cannot just make empty promises, we are also willing to set conditions for a candidate Premier. Even though it is impossible for the Lai Cabinet not to resign en masse, we believe that the best choice must have ideals, ability, executive experience and results for the public to mention, even more important is that he should have no ambition craving for a higher posting, so he can drop any burden and move full speed ahead.

These are the worst of times, but we are filled with confidence in Taiwan’s democracy and in the people of Taiwan; these are also the best of times, the whole world – especially the United States – is already aware of the ambitious rise of China, and Taiwan is really a pillar in the frontline for democracy; only if Taiwan helps itself can others come and help it. No matter whether domestically or internationally, it has already been proven that the “status quo” cannot be “maintained.” Establishing positive links with the U.S., Japan, the European Union and other democratic nations is the only way to chase away the bad and invite the good.

Mrs. President, of course you can continue alone, continue to dream about being re-elected. Then, we can conclude that within the green camp competitors will arise, and then we will have to support the other team of candidates. Will the green camp split? President Tsai, will you successfully win re-election? No. We have already analyzed the positive and the negative, so the blame for a split is not ours, the responsibility is still yours to bear.

In conclusion, we have to see your wisdom and your choice, Mrs. President.