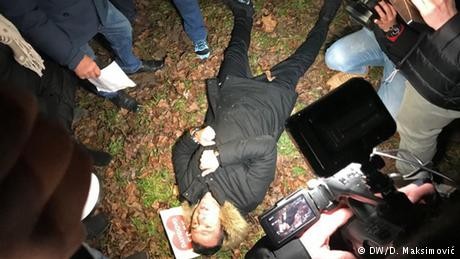 As tensions escalate over the killing of 21-year-old David Dragicevic in the Serb-dominated city of Banja Luka, UK ambassador to Bosnia and Herzegovina, Matt Field, denied rumors that his embassy was sheltering the boy's father. For months, war veteran Davor Dragicevic has been leading protest marches through the city and publically accusing the local police of killing his son.

"The UK completely rejects the claims that Mr. Dragicevic is inside our embassy or that we are in any way connected with the organization of the Banja Luka protests," Field said in a Bosnian-language tweet on Tuesday.

The ambassador's tweet comes after Serb nationalist leader Milorad Dodik accused the UK of funding the protest movement. Dodik had long served as president of Republika Srpska, the Serb entity in Bosniak-majority Bosnia and Herzegovina, before moving up to the office of chairman of the country's tripartite presidency in October. He has slammed the rallies as a part of "special warfare" against Republika Srpska.

The protests started soon after David Dragicevic's body was found floating in a shallow river this March. Police investigators initially said the youth accidentally killed himself while under the influence of drugs, but the boy's parents publically rejected this account and accused the police of a cover-up. The fate of the 21-year-old engineering student and amateur hip-hop artist drew attention online.

With protests gathering steam, police opened a murder probe in July, but the investigation has so far shown no results.

Last Tuesday, the authorities launched a violent crackdown on protesters and removed the shrine dedicated to the youth from city center. Davor Dragicevic was briefly detained.

On Sunday, Dragicevic led another march through the city, announcing that he would stay out until the perpetrators were found. Riot police dispersed this march as well. While several people were arrested and further rallies over the student's death were banned, the authorities were apparently unable to detain Dragicevic.

'The police should check themselves'

Davor Dragicevic has not been seen in public since the Sunday rally. The authorities later said they were still looking for Dragicevic, accusing him of "jeopardizing public safety" by issuing threats.

On Monday, the police also arrested opposition lawmaker Drasko Stanivukovic at a local church, where he attended a candle-lighting ceremony by the mother of the deceased boy.

The mother, Suzana Radanovic, told reporters that she did not know anything about Davor Dragicevic's whereabouts.

"To whom should I report that he is missing?" said the mother of the deceased 21-year-old David Dragicevic, according to the Serbian Beta news agency. "I reported David to be missing, and they didn't find him. The police should check themselves, that's where David was too."

Some local media reported Davor Dragicevic was negotiating his surrender through a lawyer and demanding no jail time.

The clashes prompted the authorities to cancel a New Year's concert at the main square. Banja Luka mayor Igor Radojicic later said the city would likely sue for "millions" in damages against the two young protesters who officially named themselves as organizers of the rally.

Republika Srpska's new president, Zeljka Cvijanovic, said that the rallies and the canceled celebration harmed the "image" of the entity's capital city.

"It might take several years to rebuild Banja Luka's good image," she said.

The protests have gained regional support and a rally was also held in Vienna this summer.