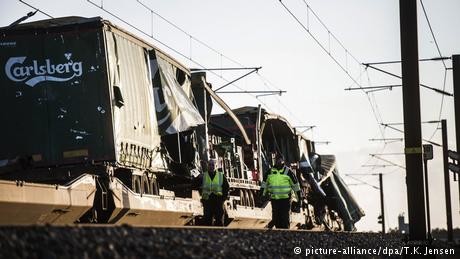 Six people were killed and several others injured on Wednesday morning after a train accident on a bridge linking the Danish islands of Zealand and Funen, according to train operator DSB.

Danish media reported that a tarpaulin on a freight train hit a passenger train heading in the opposite direction on the Great Belt Bridge towards Copenhagen, prompting it to brake suddenly.

There were at least 131 passengers and three employees on board the train when the accident happened at around 7:30 a.m. CET (0630 UTC), reported the Danish Broadcasting Corporation (DR).

A severe storm in Denmark was making it difficult for emergency services to reach the train, which has closed the bridge linking Denmark's two major islands. There were several helicopters at the scene of the accident, reported Denmark's TV 2. A crisis center has been opened in the nearby city of Nyborg to care for injured passengers.