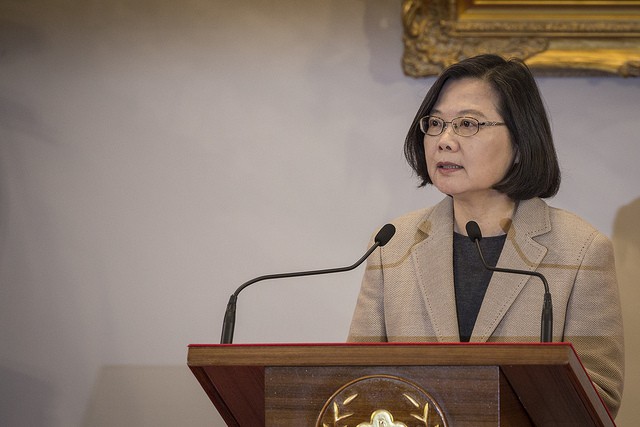 TAIPEI (Taiwan News) — Addressing the nation on the first day of the year, President Tsai Ing-wen (蔡英文) took a hard line on Taiwan’s relationship with China and touched upon the possibility of effective mechanisms to safeguard the country’s democracy.

Speaking on the eve of Chinese President Xi Jinping’s talk to commemorate the 40th anniversary of “Message to Compatriots in Taiwan” scheduled for Jan. 2, President Tsai emphasized on Tuesday that her administration does not oppose interactions across the Strait, nor does it oppose exchanges between the two nations on the municipal level, as long as such interactions are “healthy” and “normal.”

“There should be no ambiguous political preconditions, nor watchwords imposed upon any dialogue,” said President Tsai, referring to the so-called “1992 Consensus” insisted on by Beijing, which presumes that there is only one China, and that both China and Taiwan belong to the same country.

President Tsai and her independence-leaning Democratic Progressive Party (DPP) have never accepted the 1992 Consensus. Instead, they merely recognize the existence of a meeting held in 1992 between representatives of Taiwan and China.

This stance of the Tsai administration has angered Beijing, which cut off official contacts with the Taiwan government after Tsai took power in 2016 and has since intensified its campaign to isolate Taiwan from the international community.

The DPP suffered a landslide defeat during the nine-in-one local elections last November due partly to the public’s dissatisfaction with the government’s reforms. While some foreign media misconstrues the ruling party’s election failure as a signal that Taiwanese people are moving closer to the Chinese government, President Tsai on Tuesday denied such inference.

“The result of the elections absolutely does not imply that Taiwan’s public opinion has shifted towards abandoning the country’s sovereignty, nor does it mean that the Taiwanese people are willing to make concessions on Taiwan’s autonomy.”

It has also been noted by authorities and scholars from not only Taiwan, but also the United States and Japan, that Beijing attempted to interfere with the November elections through the spread of disinformation and fake news.

This was alongside masses of Chinese netizens who joined harassment campaigns targeting DPP candidates’ Facebook pages to leave negative comments, or associations with local civil society groups in Taiwan to campaign for the China-friendly Kuomintang Party.

Recognizing such threats of Chinese interference in Taiwan’s politics, President Tsai pledged to protect and reinforce the nation’s democratic system. The president has ordered the Executive Yuan to come up with practical approaches to tackle the problem of disinformation and fake news, which are often distributed from China and thus considered as threats to national security.

The authorities handling national security issues will also seek to reinforce the country's democratic institutions and improve their own monitoring mechanisms, said President Tsai. “Through rule-of-law approaches, the national security agencies will build for Taiwan a strong shield to protect our democracy.”

As more and more Western countries are considering banning or implementing stricter precautions around the use of technologies provided by Chinese corporations, President Tsai stated that her administration will follow suit. The authorities will ensure information security for key infrastructure and will take care to recognize and warn society about potential security issues related to Chinese technologies.

“Taiwan can have confidence, and should have confidence,” said President Tsai, envisioning the year of 2019 to be a year that her administration will focus on pursuing better living standards for Taiwanese society, as well as safeguarding democratic values and the country’s sovereignty.