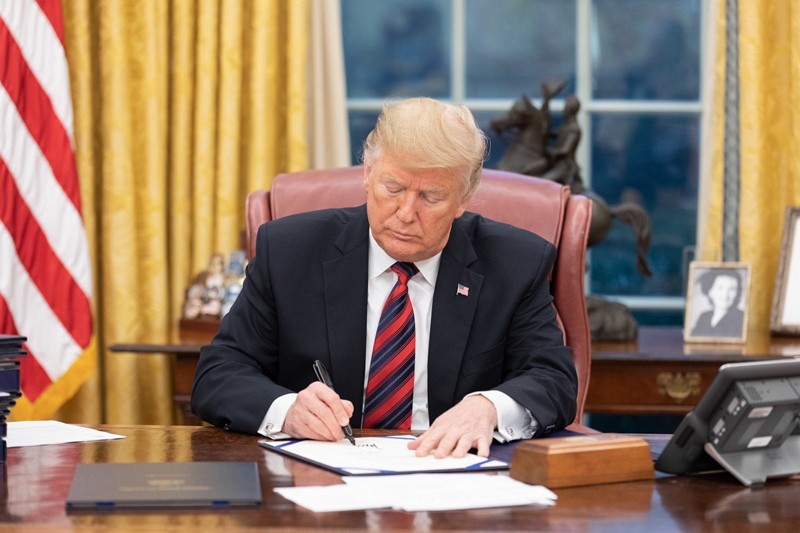 TAIPEI (Taiwan News) – In Washington D.C., just before ushering in the New Year on Dec. 31, U.S. President Donald Trump signed the Asia Reassurance Initiative Act (ARIA) into law along with 12 other bills.

The ARIA Act calls for increased U.S. engagement in the Indo-Pacific region and strengthened support, including arms sales, for U.S. allies like Taiwan and others.

The act was designed to counter the encroaching influence and growing threat from China, and to reinvigorate U.S. leadership in the region.

ARIA requests a budget of US$1.5 billion over a five year period to enhance economic, diplomatic and security cooperation with strategic regional allies.

It advises the U.S. government to sell arms to Taiwan on a regular basis to meet the country's legitimate self-defense needs, as well as recommending top administration and military officials visit Taipei in accordance with the Taiwan Travel Act.

The bill also reaffirms the U.S. position that cross-strait disputes must reach a "peaceful resolution acceptable to both sides of the Taiwan Strait."

Upon signing the Act Trump issued a statement declaring that his administration will commit to carrying out the provisions outlined in the ARIA Act which will see increased U.S. engagement across the Indo-Pacific.

"My Administration will treat these provisions consistent with the President's exclusive constitutional authorities as Commander in Chief and as the sole representative of the United States in foreign affairs," President Trump was quoted by CNA.

The ARIA Act was introduced into the Senate in April by Senator Cory Gardner, and was co-sponsored by Senators Edward Markey, Marco Rubio, and Ben Cardin. ARIA was passed by the Senate on Dec. 4, and approved by the House on Dec. 12.

The Ministry of Foreign affairs has expressed their thanks to the U.S. Congress and the President for passing the ARIA Act which will ensure increased cooperation and maintain the U.S. strategic partnership with Taiwan in the years to come.

The full text of the ARIA Act can be found on the congress.gov web site.