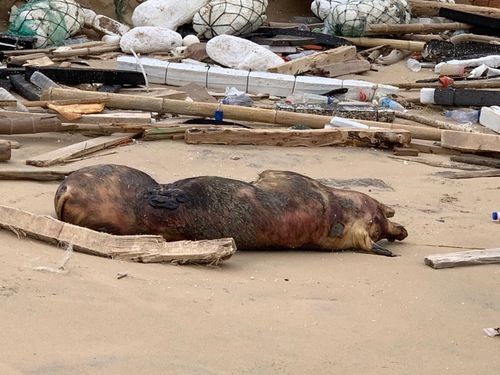 TAIPEI (CNA) -- A dead hog was found Monday on a beach in Kinmen County just kilometers away from China's southeastern coast, but officials urged the public not to panic, saying it was likely an isolated case.

The hog, weighing about 70 kilograms and measuring about 170 centimeters long and 60 cm high, was found on a beach in Tianpu, Jinsha Township, in northeastern Kinmen at 3 p.m. by Coast Guard personnel.

Coast Guard personnel immediately cordoned off the area, and veterinarians from the Kinmen County Animal and Plant Disease Control Center were sent to the beach to disinfect the site.

An initial examination of the dead hog's carcass found that it had been dead for over three days.

Wen Shui-cheng (文水成), director of the center, said the hog's appearance had been changed and could not be clearly identified, but samples taken from the carcass will be sent to the Council of Agriculture's Animal Health Research Institute for further testing.

The center urged the public not to panic, saying that judging from past experience, the dead hog was likely to be an isolated case.

The shortest distance between Kinmen and Fujian is only 2.8 kilometers.

Taiwan has been on edge over the possibility of an outbreak of African swine fever (ASF) in China spreading to Taiwan, raising concerns over whether the dead hog floated to Kinmen from China and was infected with the virus that is lethal to pigs.

There was no initial indication whether the dead pig was infected with the virus that was first reported in August this year in China's Liaoning province, prompting the Chinese government to cull tens of thousands of pigs.