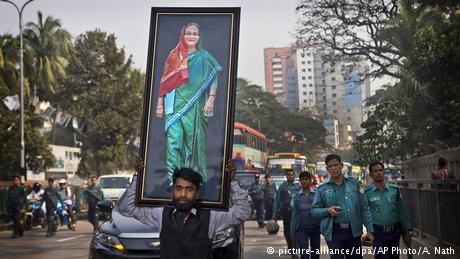 "I went to a polling center to cast my vote in Narayanganj, a district in central Bangladesh, yesterday morning, but a polling officer told me that my vote had been cast already by someone else," Rehana, a photojournalist told DW. "It's not happened just with me. I have seen hundreds of frustrated voters standing outside polling centers who were not able to cast their votes due to the same reason," she said.

Like Rehana, many other people said they were not able to cast their votes yesterday, when Bangladesh's ruling party swept the elections. The Grand Alliance, led by Sheikh Hasina's Awami League party, secured 288 out of a total of 299 seats — a record win in the country's parliamentary polls since democracy was restored in 1990.

But there are many questions about the polls' validity. Local media reported that more votes had been counted in a constituency in Bangladesh's southern city of Khulna than the total number of voters in the area. An opposition candidate there said that ballot papers had already been stamped and ballot boxes filled the night before by the ruling party activists. An international media correspondent also captured filled ballot boxes even before the polls opened on Sunday.

Some voters also complained about getting ballot papers in which the ruling party's symbol had already been stamped. In some cases, people were instructed to vote for the party when they were casting their votes in polling centers. "When I went to cast my vote, it already had a seal on it and I was asked to put it in the box,'' Robin Hasan (name changed), who had taken some time off from his job at a European university to come down to Dhaka to vote, told DW. "I requested a new ballot sheet so I could put my voting preference on it myself. I was given a new ballot,'' he said, adding, ‘‘However, I was instructed to vote for a particular candidate in front of them. I declined and requested for my right to cast my preference in a private space. The voting officer granted it.''

Hasan also pointed out that some other voters had to vote in the presence of the voting officers and that the ballot paper he refused to accept was also dropped into the ballot box. DW reporters, who were assigned to cover the election in Dhaka, also met with some voters in different areas who were not able to cast their votes, even though they went to the centers with their digital identity cards.

Although the mobile internet network of the country was shut off the night before and during the polling period yesterday, it was briefly opened for four hours in the evening on Sunday. Many ordinary voters took to social media during the short period to complain about not being able to cast their votes. The internet network was shut down again overnight.

Tasneem Khalil, a Bangladeshi-Swedish journalist, who has been monitoring the election on social media, said, "Since mainstream media in the country cannot report freely, we are relying on social media to gather evidence of rigging, incidents of violence and other abuses carried out by the security forces and activists affiliated with the ruling party."

Bangladesh Nationalist Party (BNP), who together with other political groups has formed an alliance called the Jatiyo Oikyafront, rejected the results of the election citing voter fraud. Some independent candidates also condemned the polls even before they ended yesterday, saying votes had been heavily tampered with.

"The widespread rigging happened within the polling centers and in front of the administration. A large number of votes were cast in favor of the ruling party on the night before the election day by ruling party members," Zonayed Saki, an independent candidate of a constituency in Dhaka alleged, adding, "They also removed all the polling agents of other candidates from the centers, creating doubts about the vote-counting process as well."

Despite desperate requests from opposition parties, the international community did not send many election observers to the Muslim-majority country to monitor the election, making it difficult to get an independent opinion about yesterday's voting. There were not enough local observers to watch the voting process either.

Calling it a "managed election," Badiul Alam Majumder, who leads the country's largest volunteer-based network named SHUJAN, said, "There have been a lot of complaints about voter fraud. These need to be documented." Based on the information he got from the volunteers throughout the country, he told DW that many voters had complained about their inability to cast their vote and that there had been cases of fraudulent voting.

Majumder pointed out that there was a widespread perception nationally and internationally that the ruling party was going to return because of all the pre-election developments that took place before the election day, including the arrests of tens of thousands opposition activists as well as attacks on opposition candidates. Many nominations were rejected at the last moment.

"Unfortunately, the election commission, which is a constitutional and independent body mandated to hold free, fair and credible elections, failed to create the right atmosphere for a free and fair election this time," he told DW, adding, "That led to a managed election that went out of control."

On the contrary, Hamid Opeloyeru, the leader of The Organisation of Islamic Cooperation's (OIC) election monitoring team, expressed satisfaction with the overall atmosphere of yesterday's polls. "Based on some of the polling centers we have visited in Dhaka, Munshiganj, and Narayanganj areas, we can say that the voters were very cheerful and the opposition was present there too," he told DW.

Meanwhile, Bangladesh's election commission has announced it will investigate complaints related to voting irregularities, but Gowher Rizvi, an adviser to Prime Minister Sheikh Hasina, said it was easier for the opposition parties to blame someone else rather than accept defeat: "It is convenient to say if we win we accept the polls, if we lose this is rigged."