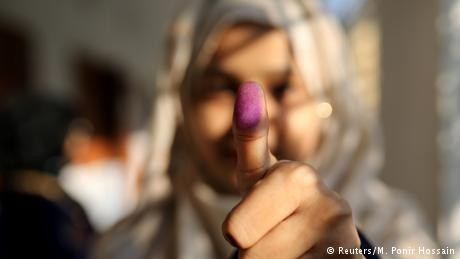 Just think about the results of the general election held in Bangladesh on Sunday under the watchful eye of the ruling party, Awami League (AL). Yes, an election held while a political party is in power is still a matter of considerable discussion in Bangladesh.

That's because, in the past, no opposition party was able to win an election when a ruling party controlled the administration. It's common for the incumbent party to exploit the election commission, security forces and other state institutions for its partisan purposes and making sure that it emerges victorious in the polls.

Sunday's vote confirms that Bangladesh would like to remain at this stage of democratic development, at least for now. In the run-up to the polls, thousands of opposition party members, including some candidates, were arrested on trumped-up charges. The election commission, which is supposed to be guarantee a free, fair and inclusive vote, did not pay heed to the numerous complaints filed by the opposition.

More than 40 opposition candidates pulled out of the race after polls opened, citing vote-rigging and ballot-stuffing.

The results: Out of the total 299 seats contested, the ruling coalition led by Prime Minister Sheikh Hasina's AL party won a whopping 288 seats! That's about 96 percent of all the seats contested. Doesn't the result appear like it was achieved in an election held by an autocratic government?

There's little doubt that Hasina's government has become increasingly authoritarian over the past decade, when her administration introduced laws to detain government critics. Some high-profile arrests were made to create a climate of fear in the country.

Press freedom also came under attack during Hasina's last two terms in office. The government enacted new legislation to tighten its grip on the media. As a consequence, Bangladesh's ranking in the press freedom index compiled by Reporters Without Borders dropped from 121 in 2009 to 148 now, out of 180 countries.

Over the past decade, Bangladesh's economy has witnessed impressive growth, expanding by over six percent annually. Many anticipated this rapid growth to boost Awami League's chances for victory.

Against this background, it would have been wise for Hasina to show to the world that Bangladesh's state institutions are powerful and competent enough to hold a free, fair and inclusive election, even if a political party is in office, which is a practice common in the developed world.

However, Hasina chose the other way.

Now it remains to be seen whether Hasina's biggest win makes her more authoritarian or turns her heart big enough to make her think about upgrading the country's democratic status on the world stage.