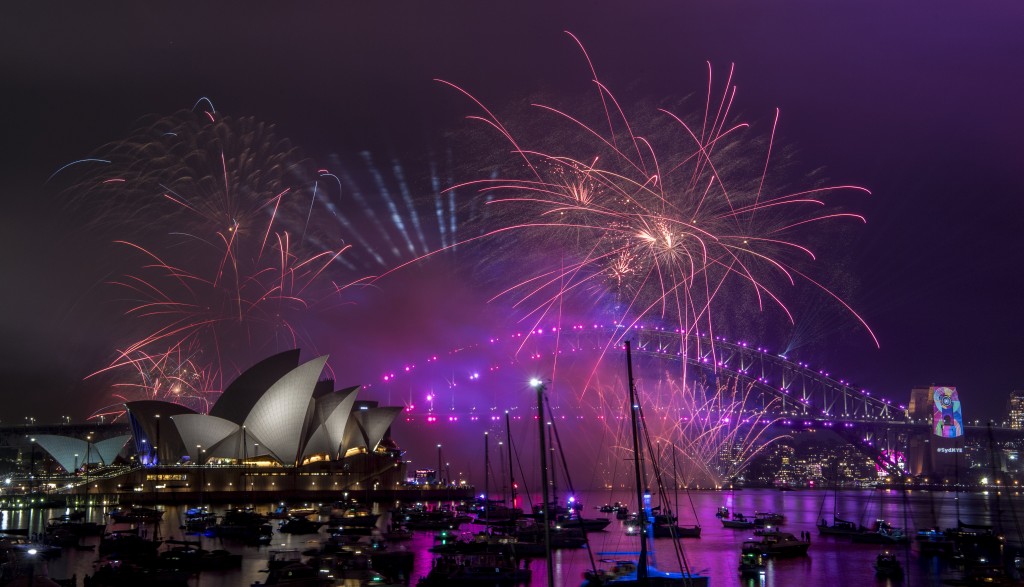 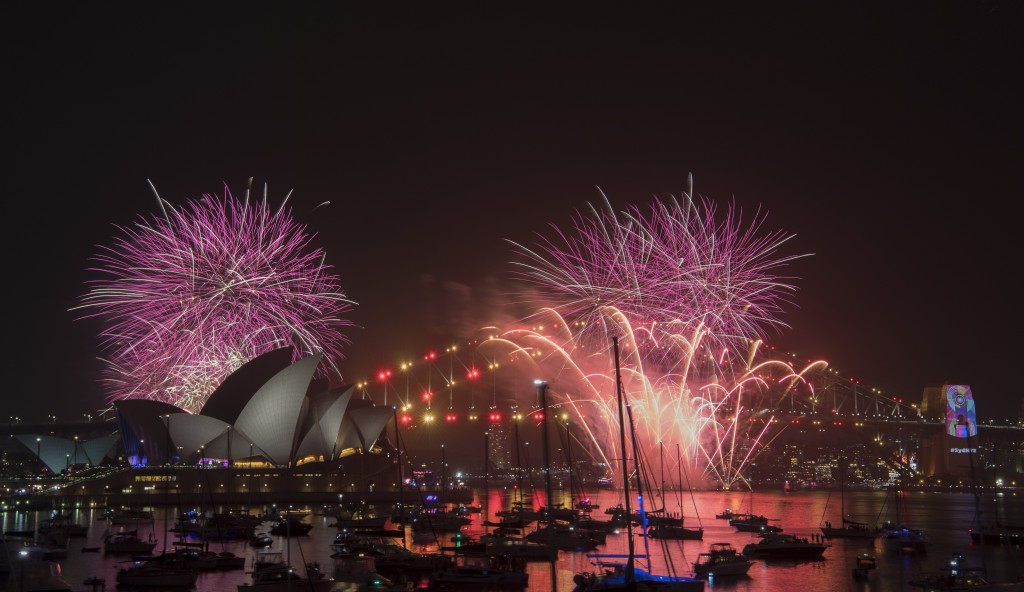 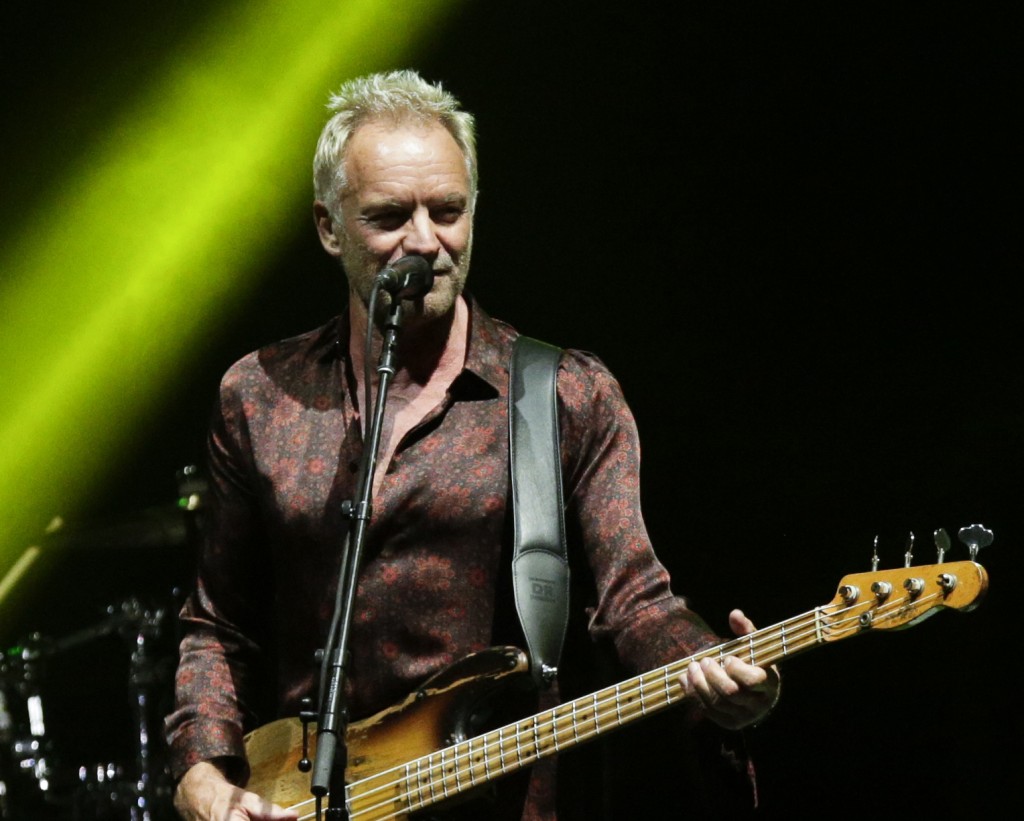 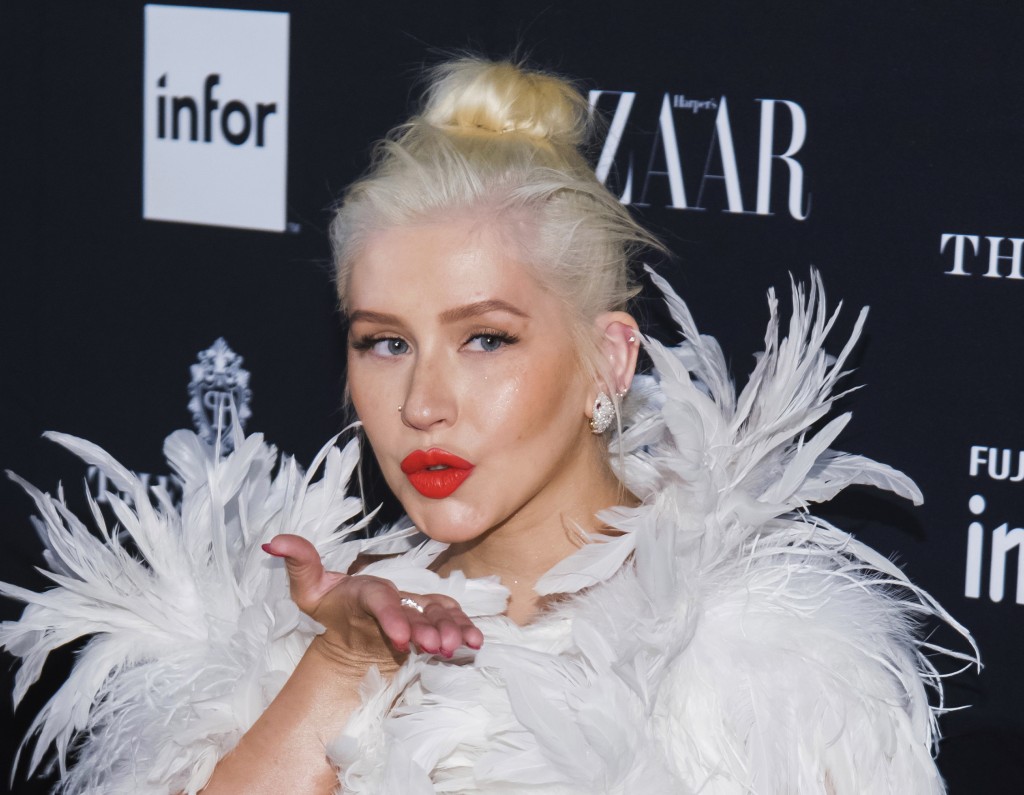 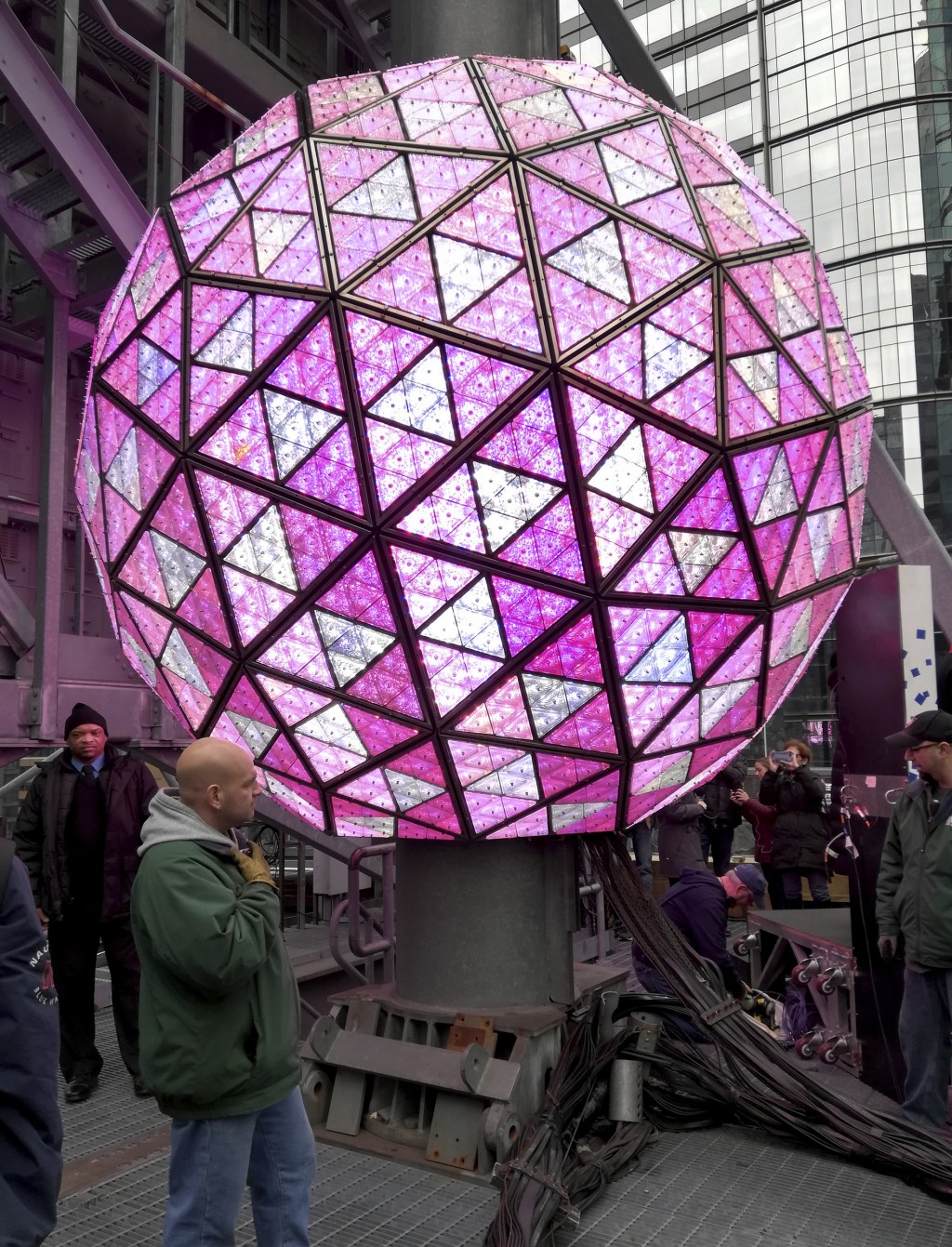 Revelers around the globe are bidding a weary farewell Monday to an unsettling year filled with challenges to many of the world's most basic institutions, including politics, trade, alliances and religion.

Here's a look at how people are ushering in the new year:

In Auckland, New Zealand's biggest city, tens of thousands gathered around Sky Tower as fireworks exploded from the top of the 328-meter (1,076-foot) structure. Across the southern hemisphere nation, thousands took to beaches and streets, becoming among the first in the world to usher in 2019.

Fireworks boomed and crackled above city centers and harbors.

A thunderstorm drenched tens of thousands of people as they gathered for Sydney's traditional spectacular fireworks display, creating a show of its own with dozens of lightning strikes.

Police estimated that more than a million people would crowd Sydney Harbor to view the glittering fireworks. People began gathering early in the day at popular vantage points, including the Opera House and the ends of the Harbor Bridge.

The show was to feature more than 100,000 pyrotechnic effects accompanied by music culminating at midnight with "(You Make Me Feel Like) A Natural Woman," made famous by Aretha Franklin, who died in August.

Police said they were taking precautions to prevent any terrorist attack, but assured revelers there was no specific threat.

"We put obstacles between those large crowds and vehicles to ensure people can get in and out safely and enjoy their night in safety," police Acting Deputy Commissioner Mark Walton said.

More than 1 billion people around the world were expected to watch the fireworks on television.

U.N. Secretary-General Antonio Guterres issued a bleak New Year's message that called climate change an existential threat and warned that "it's time to seize our last best chance." He noted growing intolerance, geo-political divisions and inequality, resulting in people "questioning a world in which a handful of people hold the same wealth as half of humanity."

"But there are also reasons for hope," he said. "As we begin this New Year, let's resolve to confront threats, defend human dignity and build a better future — together."

After an eventful year that saw three inter-Korean summits and the easing of tensions over North Korea's nuclear program, South Koreans enter 2019 with hopes that the hard-won detente will expand into a stable peace.

Thousands of South Koreans were expected to fill the streets of the capital, Seoul, for a traditional bell-tolling ceremony near City Hall to usher in the new year. Dignitaries picked to ring the old Bosingak bell at midnight include famous surgeon Lee Guk-jong, who successfully operated on a North Korean soldier who escaped to South Korea in 2017 in a hail of bullets fired by his comrades.

Elsewhere, about 10,000 people were expected to attend the tolling of a "peace bell" at Imjingak, a pavilion near the border with North Korea.

Leader Kim Jong Un will keep North Korea watchers busy on New Year's Day, when he is expected to give his annual address laying out the country's priorities for the year ahead. The speech is often the best gauge of what the North Korean leadership is focused on and what tone it will take in its dealings with the outside world.

Kim's speech it will be parsed carefully for clues about his thinking on denuclearization talks with Washington and a second summit with President Donald Trump, relations with South Korea, and North Korea's efforts to get out from under international sanctions as it tries to build its domestic economy.

In his New Year's speech this past year, Kim proposed talks with South Korea to reduce tensions and said the North would be willing to participate in South Korea's Winter Olympics, setting off a series of summits with the South and the U.S.

While many celebrate New Year's Eve with fireworks, hundreds of Thais traveled to Takien Temple in a suburb of Bangkok to lie inside coffins for traditional funeral rituals. Participants believe the ceremony — symbolizing death and rebirth — helps rid them of bad luck and allows them to be born again for a fresh start in the new year.

Participants held flowers and incense in their hands as monks covered them with pink sheets and chanted prayers for the dead.

"It wasn't scary or anything. It is our belief that it will help us get rid of bad luck and bring good fortune to our life," said Busaba Yookong, who came to the temple with her family.

Bangkok is filled with modern glitzy malls and high-rise buildings, but superstitious beliefs still hold sway in many aspects of Thai society.

Snoop Dogg, Sting and Christina Aguilera will welcome 2019 in a packed Times Square along with revelers from around the world who come to see the traditional crystal ball drop.

Spectators are expected to start assembling early in the afternoon for the made-for-TV extravaganza. The celebration will take place under tight security, with partygoers checked for weapons and then herded into pens, ringed by metal barricades, where they wait for the stroke of midnight.