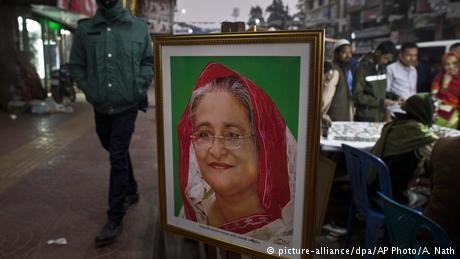 An alliance dominated by Hasina's Awami League won 288 seats in the country's 300-strong parliament. The opposition alliance led by the Bangladesh Nationalist Party (BNP) of former Prime Minister Khaleda Zia won just six seats. Election to one seat was not held Sunday and results for another seat were halted by the commission.

Hasina's party was widely anticipated to win the election that was hit by violence and rigging allegations. At least 17 people were reported to have been killed in violence between rival supporters.

Hasina, who is set to take office for the third consecutive time and fourth time overall, is credited with improving the country's economy, which grew at a faster rate than neighboring India last year, and giving refuge to hundreds of thousands of Rohingya Muslims who have fled Myanmar. But she has also been accused of a crackdown on media and dissent.

In the run-up to the election, opposition parties complained that the government had crippled their ability to campaign by arresting scores of workers on "fictitious" charges. They also alleged that ruling party activists engaged in intimidation and violence against opposition supporters.

The deadly violence that marred the campaign spilled over into voting day, leaving more than a dozen people dead.

"We reject the farcical election, and want the election commission to hold a fresh election under a non-partisan administration," said Kamal Hossain, the leader of the opposition alliance.

The polling on Sunday was also hit by complaints of vote rigging from across the country.

"We've had bad elections in the past but I must say that it is unprecedented how bad this particular election was. The minimum requirements of free and fair election are absent," he said, adding that the alliance leaders will meet on Monday to chalk out their next strategy.

Hossain said a few hours after voting ended that about 100 candidates from the alliance had withdrawn from their races during the day.

The Election Commission said it was investigating allegations of vote rigging.

Meenakshi Ganguly, South Asia director for Human Rights Watch, said on Twitter the allegations raised concerns about the credibility of the election.

This was the first time the opposition BNP campaigned without its leader Khaleda Zia, who has been in jail since February on
corruption charges that she says are politically motivated. Zia and Hasina have alternated in power for most of the past three decades.

In 2014, Zia and her party boycotted the general election, handing Hasina a virtual walkover. More than half of the 300 parliamentary seats were uncontested in the election that saw a voter turnout of only 22 percent.