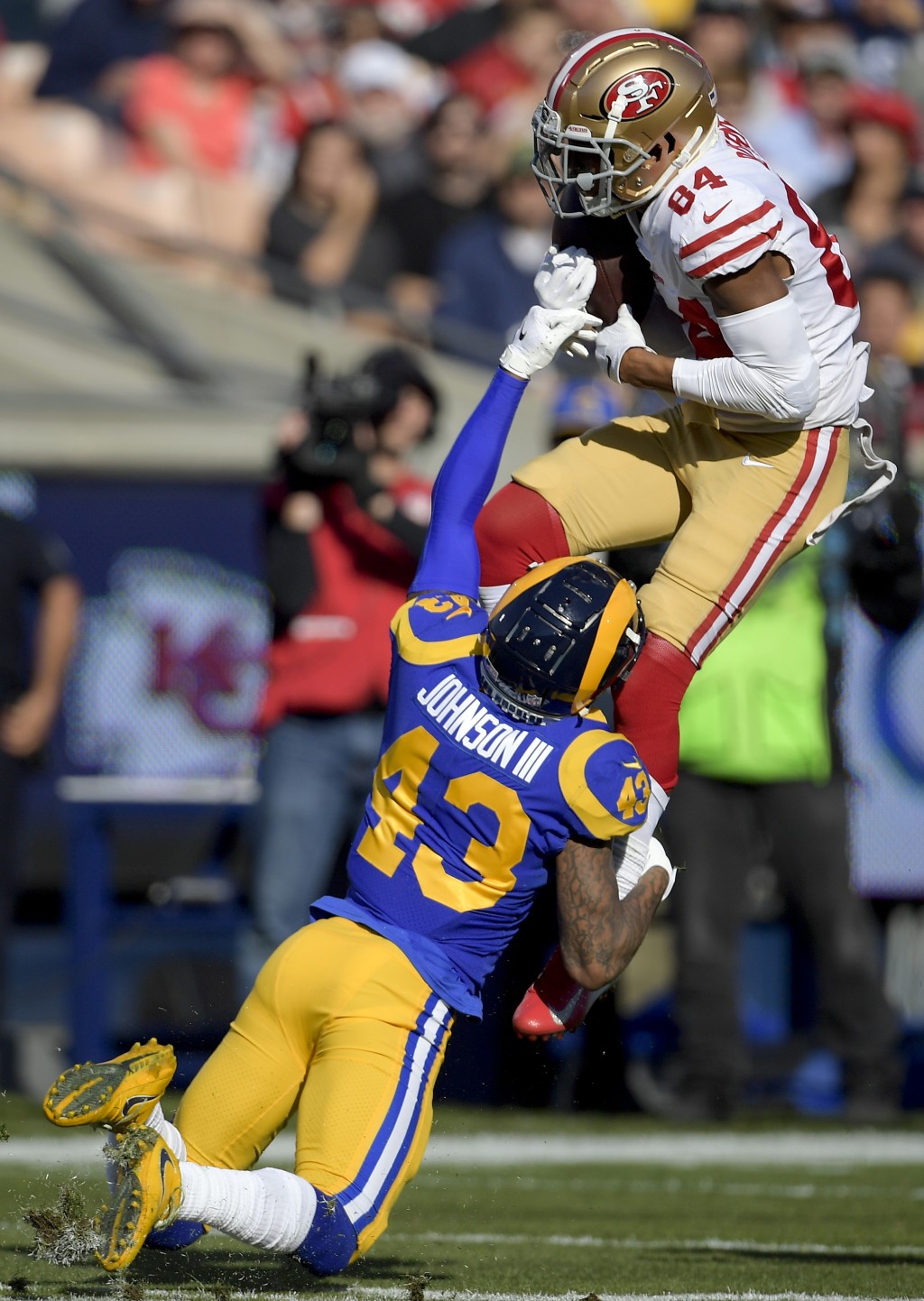 Cory Littleton returned one of his two interceptions for a TD as the Rams (13-3) forced four turnovers and wrapped up their winningest regular season since 2001 with a six-game sweep of their NFC West rivals.

Goff passed for 199 yards for Los Angeles, which needed a win over the Niners or a loss by Chicago to clinch the No. 2 seed in the NFC postseason. The Rams didn't mess around, playing nearly every starter except Todd Gurley and jumping to a 14-0 lead in the first five minutes before stretching it to 28-3 midway through the second quarter.

Nick Mullens passed for 282 yards with three touchdowns and three interceptions for the 49ers (4-12), who wrapped up their fifth consecutive non-winning season. San Francisco went winless on the road for the first time since 1979, Bill Walsh's first season in charge.

George Kittle set the NFL's single-season record for yards receiving by a tight end with 1,377 when he caught a 43-yard touchdown pass from Mullens with 2:20 left, while Richie James also caught a TD pass and Alfred Morris rushed for 111 yards and a score. San Francisco also set an NFL record with just seven takeaways all season after failing to force a turnover by Goff and his teammates.

C.J. Anderson rushed for 132 yards and a touchdown in his second 100-yard game in place of Gurley, who sat out again to rest his knees.

The Rams clinched the division four weeks ago, but missed the chance to secure a week off when they lost at Chicago two weeks later. The Bears pushed LA until the final week, but the Rams took control quickly at the Coliseum.

On the game's fourth snap, Aqib Talib returned fullback Kyle Juszczyk's fumble inside the Niners 10. After Cooks caught a TD pass, Littleton returned his first interception 22 yards and Anderson punched it in.

Littleton, the Rams' do-it-all linebacker and Pro Bowl special-teamer, took his second pick 19 yards to the house early in the second quarter. Cooks' second TD catch put the Rams up by 25, but McVay didn't pull his starters until the second half as the Niners kept pushing.

The Rams rested Gurley and safety Lamarcus Joyner, but otherwise used their regular lineup with a bye on the line. Gurley is expected to be ready for the postseason, and an extra week off will only help.

Kittle had nine catches for 149 yards, including five for 95 yards in the fourth quarter. He surpassed both Rob Gronkowski's 2011 record of 1,327 yards and the new mark set earlier Sunday by Kansas City's Travis Kelce, who finished this season with 1,336. The Niners were determined to get the record, targeting Kittle 14 times — including six times in the fourth quarter of the blowout.

Aaron Donald had one sack to finish with 20½ for the season. The Rams' peerless defensive tackle fell short of Michael Strahan's single-season sacks record of 22½, but Donald still set an NFL record with 183.5 total sack yards when he dropped Mullens for an 8-yard loss in the first half.

49ers: LG Laken Tomlinson left the field on a cart in the second quarter with an apparent right knee injury.

Rams: LT Andrew Whitworth left the field gingerly in the second quarter with a knee injury, frightening fans who realize the veteran's importance to the Los Angeles offense. He didn't return, but rookie Joseph Noteboom appeared to play well in his absence. ... S Blake Countess started in Joyner's place, but left the game early with a concussion.