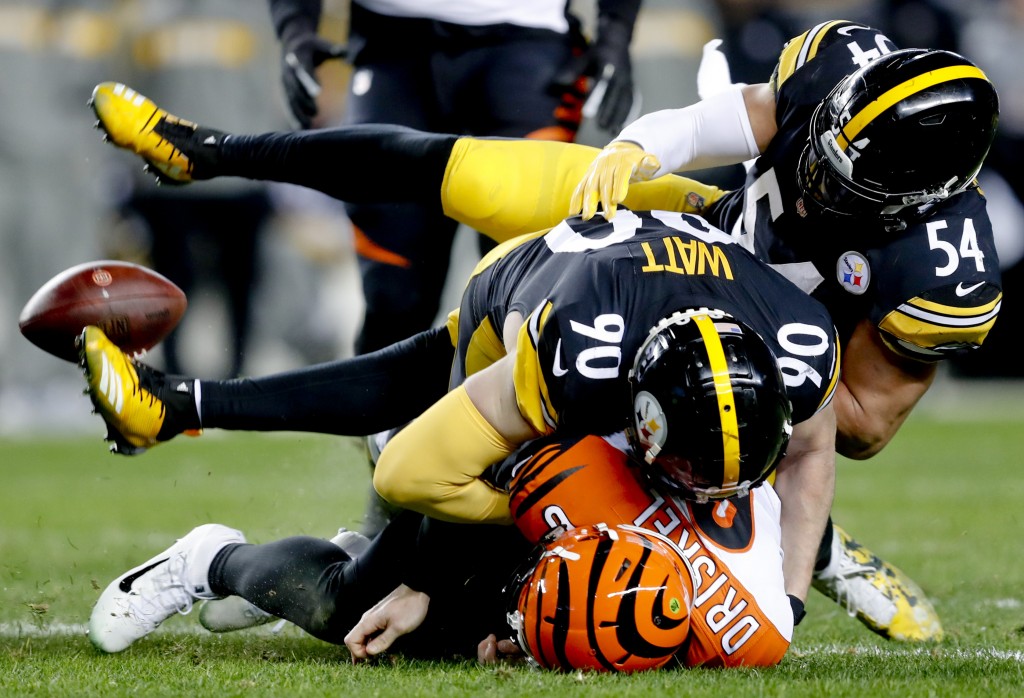 Still, it wasn't enough for Pittsburgh to win its third straight AFC North title. The Steelers (9-6-1) saw their chance at capturing the division end when Baltimore held off Cleveland 26-24.

A significant portion of the team remained on the field after the game ended watching Cleveland's last-ditch drive while the crowd that stuck around chanted "Let's Go Browns." A massive groan arose when Cleveland rookie quarterback Baker Mayfield was intercepted in Baltimore territory in the waning seconds.

Pittsburgh still has a remote shot to reach the postseason for the fifth consecutive year, but needs Indianapolis and Tennessee to tie on Sunday night.

Roethlisberger finished the season with a career-best and NFL-high 5,129 yards passing — the first time in franchise history a Steelers quarterback has won the league passing title by himself. Playing without injured wide receiver Antonio Brown, Roethlisberger struggled to get into any rhythm against Cincinnati's woeful defense.

He managed just one touchdown pass — a screen to wide receiver JuJu Smith-Schuster in the third quarter that Smith-Schuster turned into an 11-yard score that tied it at 10 — forcing the Steelers to rely on McCrane. Signed late in the week after a lower-body injury sent Chris Boswell to injured reserve, McCrane connected on kicks of 39, 47 and 35 yards, the last coming with 1:56 to go that put Pittsburgh in front to stay.

While Joe Mixon rushed for 105 yards, the Bengals (6-10) mustered just 196 total yards to lose for the seventh time in their final eight games. Driskel completed 12 of 24 passes for 95 yards and was sacked four times.

Cincinnati's season turned at home against the Steelers back in October, when the Bengals let Pittsburgh go down the field in the final minute to pull out a 28-21 victory on Antonio Brown's 31-yard catch and run with 10 seconds to play. An avalanche of injuries and losses followed. Cincinnati walked onto the Heinz Field turf with 18 players on injured reserve, including quarterback Andy Dalton and wide receiver A.J. Green.

Though the Bengals had little to play other than perhaps head coach Marvin Lewis, whose future is uncertain at the end of his 16th season, for long stretches it was the Steelers who looked like the group going through the motions.

Missing Brown and safety Sean Davis didn't help, but Pittsburgh's high-powered offense appeared lifeless even with the return of running back James Conner. The Pro Bowler missed three games with a sprained left ankle but mustered little against the worst defense in Cincinnati history.

The Bengals took a 10-3 lead into the half, the lone score coming on a 58-yard interception return for a touchdown Shawn Williams.

Pittsburgh finally snapped out of it with a 47-yard pass from Roethlisberger to rookie James Washington. Roethlisberger hit Smith-Schuster two plays later as the Steelers drew even.

Bengals: WR Cody Core left late in the first quarter with a left elbow injury. Core was hurt while diving for a pass deep down the left sideline. ... LT Cordy Glenn injured his left ankle after getting rolled up on during a scrum following fumble by Driskel in the third quarter. Safety Brandon Wilson left in the second half with a chest injury and tight end Matt Lengel exited with a left knee issue.

Bengals: Owner Mike Brown will meet with Lewis to decide whether a 17th season is in the offing for the winning coach in franchise history.