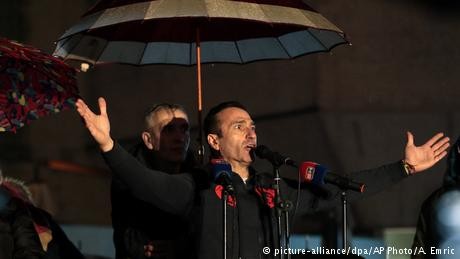 Like previous protests, the Sunday rally was led by David's father, Davor Dragicevic. Following the rally, riot police dispersed dozens of protesters who remained on the streets, with local media reporting several people had been detained.

Addressing the crowd, Davor restated his accusations that his son was kidnapped, tortured, and eventually murdered by members of Republika Srpska police. He also urged the protesters to join him and camp out at a local square until the perpetrators are found.

"If you don't stand by this, they will kill you all," Dragicevic said. "I'm not leaving. Everyone should come and stay as long as they could based on their conscience and obligations."

Protesters chanted "murderers" and "Justice for David" while passing by state buildings in the administrative capital of Bosnia's Serb-dominated entity. Dragicevic, who fought for the Serb forces during the Bosnian war, also showed the police his wartime scars.

The protest leaders demand the resignation of Republika Srpska's Interior Minister Dragan Lukac and other top police officials, whom they accuse of covering up the student's murder.

The officials deny any wrongdoing.

The body of 21-year-old David Dragicevic was found in a Banja Luka river in March 2018. Police quickly declared the death was "accidental" with a medical examiner claiming to have found traces of LSD in the young man's body. Investigators publicly speculated that David took drugs, became involved in a fight, went on to rob a house and then fell into the river and drowned.

However, David's parents and members of the public rejected this account, pointing to what they saw as numerous inconsistencies in the official version of events. The alleged presence of drugs soon turned out to be false, and the medical examiner is now under investigation. A subsequent toxicology screening in Belgrade found no traces of drugs.

Under growing pressure from the public, authorities opened a murder investigation in July. As of late December, no significant results had been made public.

David's parents started public protests in Banja Luka soon after his death, with the movement gaining widespread support over the following months. The tensions escalated on Tuesday, when police launched a violent crackdown on protesters and briefly detained Davor Dragicevic.

The city also cleared away the shrine dedicated to the student in Banja Luka's central square. Protesters have since reinstated the memorial.

Nationalist Serb politician Milorad Dodik, who recently took up the office of chairman of Bosnia and Herzegovina's tripartite presidency, alleged that protests are a part of nefarious plot to abolish Republika Srpska.

Ahead of the Sunday protest, he warned of a "special warfare" linked with the protest and said that foreign actors, including the British, were investing large sums into opposition parties, anti-government media and the protest movement to bring down the Serb entity.