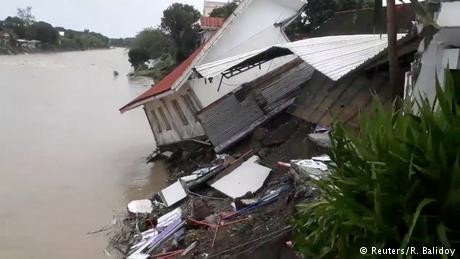 Rescue teams in the Philippines on Sunday searched for dozens of missing residents after Cyclone Usman swept through the Southeast Asian archipelago, leaving 22 people dead.

At least 16 people died in Bicol while six others were killed in Eastern Visayas, civil defense officials said.

"Most of the (affected) areas are underwater. We are sending troops and rubber boats to rescue families. In some areas the floods have reached the roofs of homes," Claudio Yucot, head of the Bicol region's office of civil defense, told the Agence France-Presse news agency.

Local media have reported dozens missing or trapped by the landslides and officials have warned that the death toll could rise as flood waters slowly recede.

A regional office of the disaster agency said it was working to confirm the deaths of a further 38 people in the Bicol region, located south of the main island of Luzon.

Disaster agency spokesman Edgar Posadas said the winds from Usman were "not strong," but their effects had left widespread devastation.

Ahead of the storm, tens of thousands of people in six provinces fled their homes, after official warnings.

Thousands of others were stranded at seaports, airports and bus terminals following the cancelation of dozens of inter-island trips.

The area is likely to experience more heavy rain over the next 24 hours, forecasters said.

A cold front and the northeast monsoon were also bringing bad weather over the capital, Manila, and other parts of the country, which could dampen usually rowdy New Year's Eve celebrations.

Read more: Filipinos want to boost green energy — but where will they get the cash?

The Philippines has been described as the world's most exposed country to tropical storms. An average of 20 cyclones hit the archipelago each year — five of which are destructive.

The most powerful was Super Typhoon Haiyan in 2013, which left more than 7,360 people dead or missing across the central Philippines.