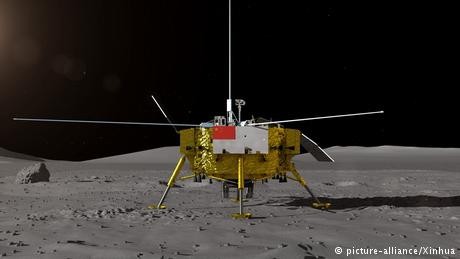 China's Chang'e-4 probe is preparing to make the first-ever landing on the far side on the Moon this week, Chinese state media reported on Sunday.

The probe entered a planned elliptical lunar orbit on Sunday morning which brought it at its closest point just 15 kilometers (9 miles) away from the surface of the moon, the official Xinhua news agency said, citing the China National Space Administration.

The landing is expected to take place on Thursday and is another critical step in the country's ambitions to challenge US and Russian dominance in space.

The launch of the probe, named after the Chinese goddess of the Moon, was originally due to take place in 2015 but was delayed by adjustments to the mission's objectives. It finally launched on December 7 and entered lunar orbit five days later.

A communications relay satellite, the Queqiao, or Magpie Bridge, which launched in May, is aiding the probe's descent.

Xinhua said the probe's ground control center in Beijing had tested communication links between the probe and the satellite and checked the imaging instruments and ranging detectors on the probe ahead of the landing.

Once it makes its soft landing, Chang'e-4's tasks include surveying the moon's terrain and gathering data on landform and mineral composition, particularly of the Aitken basin, one of the largest craters in the solar system.

The probe is carrying seeds for an experiment in cultivating vegetables in a closed environment on the lunar surface. It's also equipped with a panorama camera and measuring devices.

It is often known as the "dark" side of the moon in the sense that it is not visible from Earth, as the moon is tidally locked to Earth, rotating on its axis at roughly the same rate that it orbits our planet.

The far side has long fascinated scientists but was only first observed and photographer in 1959 by the Soviet space probe, Luna 3. The Apollo 8 astronauts were the first to see it with the naked eye. But no one has ever landed on it.

Read more: Fifty years after Lunar Orbiter 4 mapped almost all the moon it's time we went back

The near side, however, has been reached before, by US astronauts between 1969 and 1972, and the Soviets in 1976. It took a further 40 years before China would make its first landing on the side visible to Earth, in 2013 in the Chang'e 3 probe.

China's ambition of becoming a major space power by 2030 has concerned the US and Russia. Washington has warned that the space program seeks to prevent other nations from using space-based assets during a crisis, while Beijing insists its ambitions are purely peaceful.

Beijing plans to begin construction of its own manned space station next year.