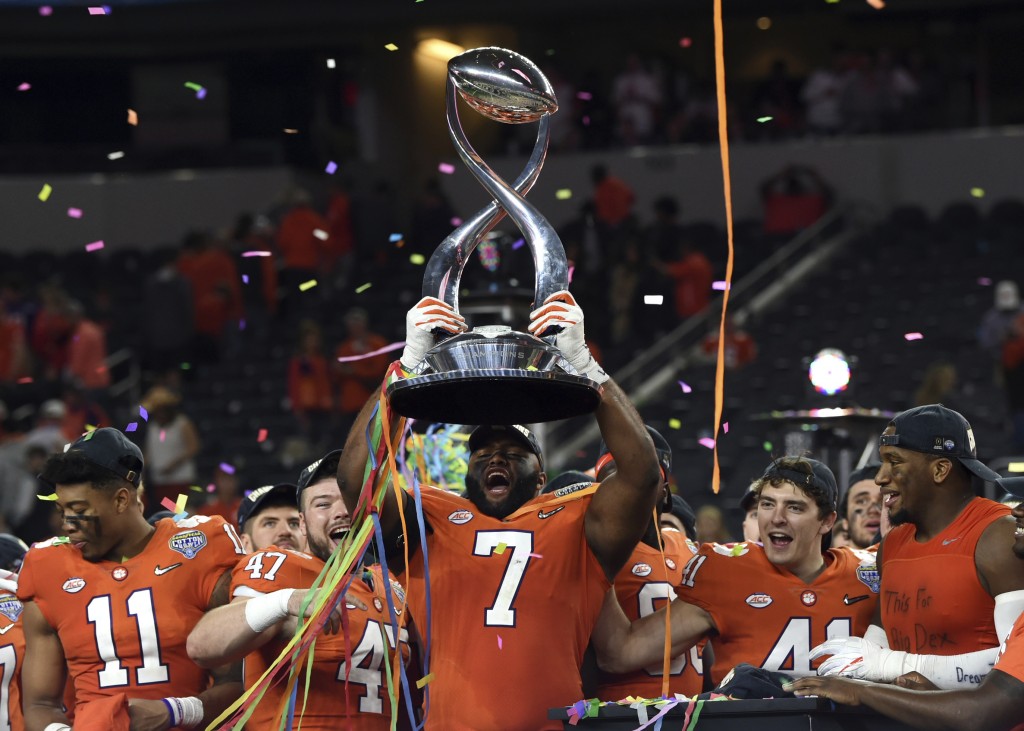 The top-ranked Crimson Tide and No. 2 Tigers both had double-digit victories in their semifinal games Saturday, setting up what has quickly become an annual postseason meeting. They will meet in the College Football Playoff for the fourth consecutive year, the third time in the championship game.

And the winner this time will become the first 15-0 FBS champion.

Alabama-Clemson Part IV, Nick Saban vs. Dabo Swinney, comes Jan. 7 on the opposite side of the country for both teams. The national title will be at the home stadium of the NFL's San Francisco 49ers in Santa Clara, California.

This matchup has seemed inevitable since the Tide and Tigers started the season ranked 1-2. They will also likely finish that way, like they did two seasons ago when they also began the season as the top two teams in the AP Top 25.

Both have regularly been winning games by wide margins this year.

Clemson freshman Trevor Lawrence threw for 327 yards and three touchdowns as the Tigers beat No. 3 Notre Dame 30-3 in the Cotton Bowl. Alabama jumped out to a 28-0 lead on way to its 45-34 win in the Orange Bowl over Heisman Trophy winner Kyler Murray and Big 12 champion Oklahoma.

Before Alabama had to rally to beat Georgia 35-28 in the SEC championship game, the closest margin for the Crimson Tide had been 24 points. And that was 24-0 over then-No. 18 Mississippi State on Nov. 10 when they posted their second consecutive shutout victory.

Since winning 28-26 at Texas A&M and 27-23 against Syracuse in the first month of the season, Clemson has won its last nine games by an average margin of 37 points. The closest game in that stretch was a 20-point win at then-No. 17 Boston College — on the same day as Alabama's closest call in the regular season.

The Crimson Tide will be going for their sixth national championship in Saban's 12 seasons. Swinney is in his 10th full season as Clemson's coach.

Alabama beat fellow SEC team Georgia in last year's CFP title game after a 24-6 win over Clemson in their semifinal game at the Sugar Bowl.

Clemson won the 2016 championship — its only other national title was 1981 — with a 35-31 victory over Alabama after Hunter Renfrow, now a Tigers senior, caught a 2-yard TD from DeShaun Watson with a second remaining in Tampa Bay.

Alabama beat the Tigers 45-40 in Arizona for the 2015 title after the two teams combined for a 40-point fourth quarter.

Before Alabama and Clemson, the last time the same two teams started and ended the season 1-2 in the AP poll was in 2005. Southern Cal was No. 1 all season until losing to Texas and Vince Young in the national championship game.