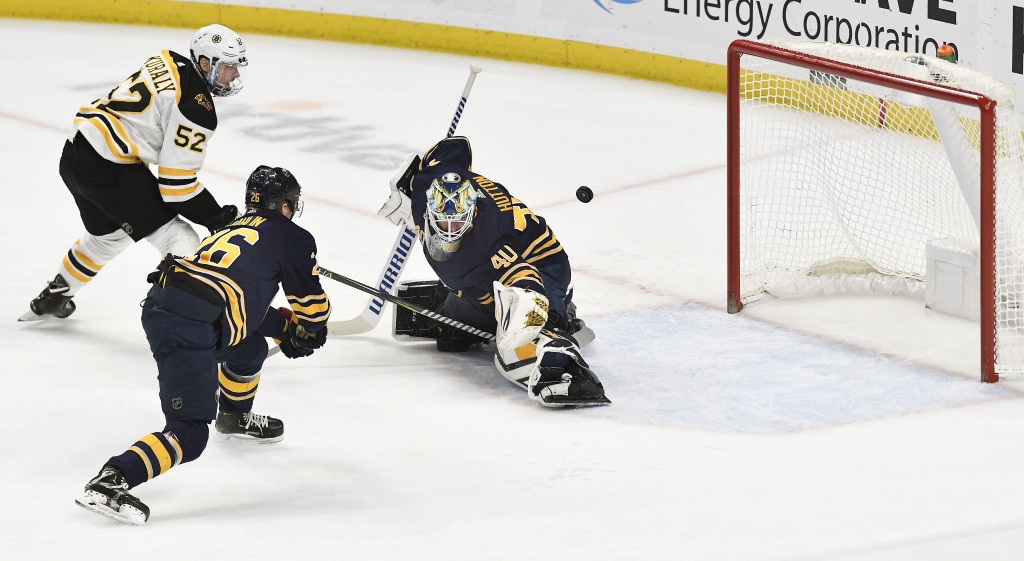 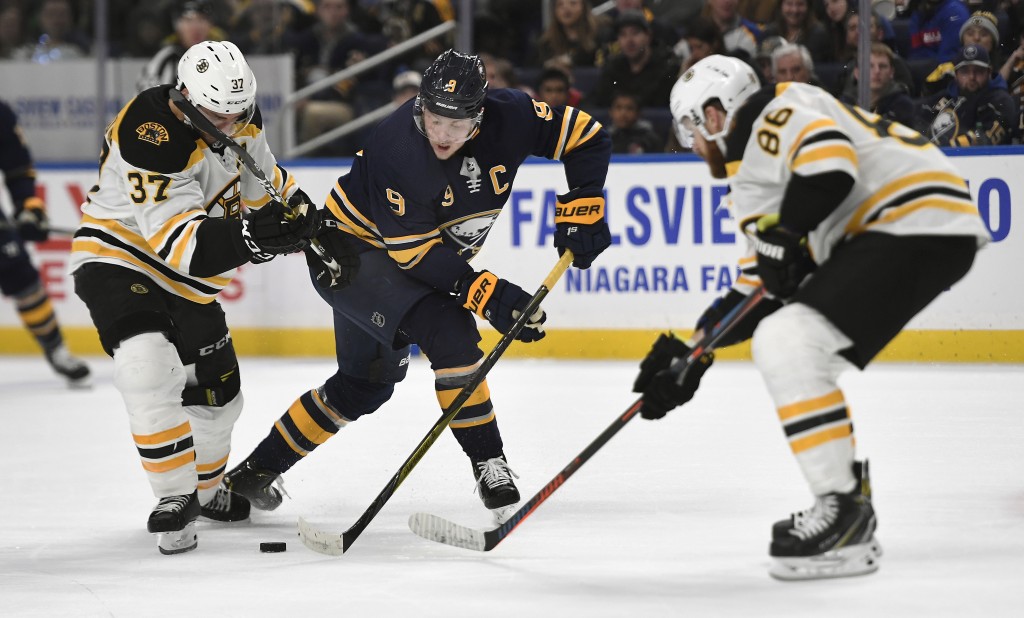 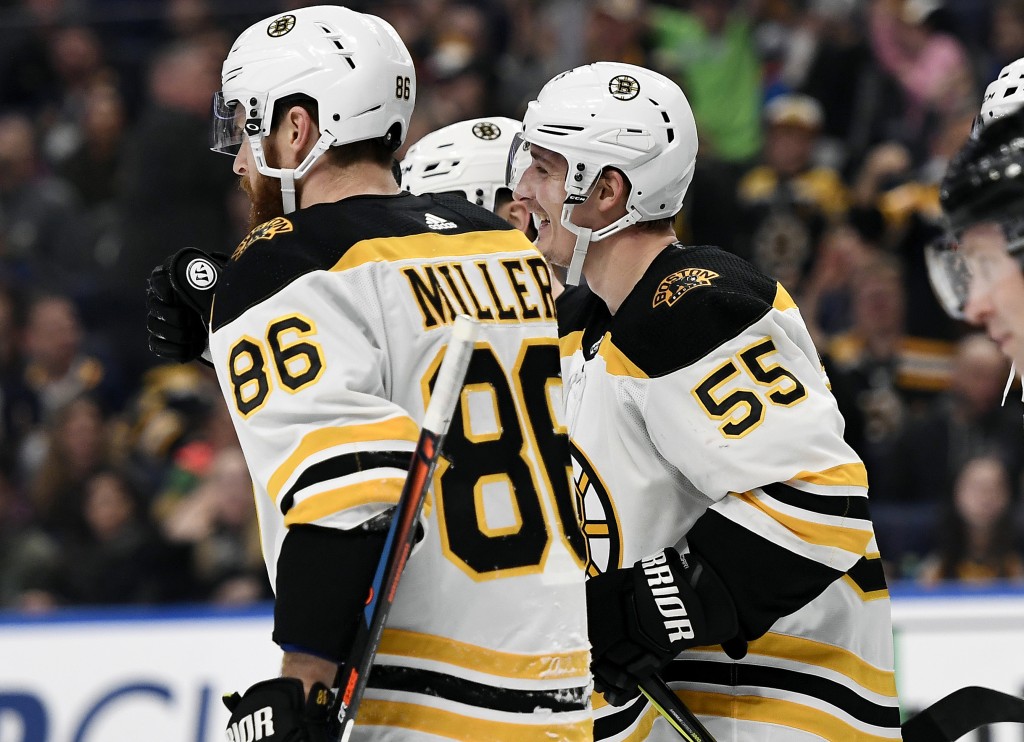 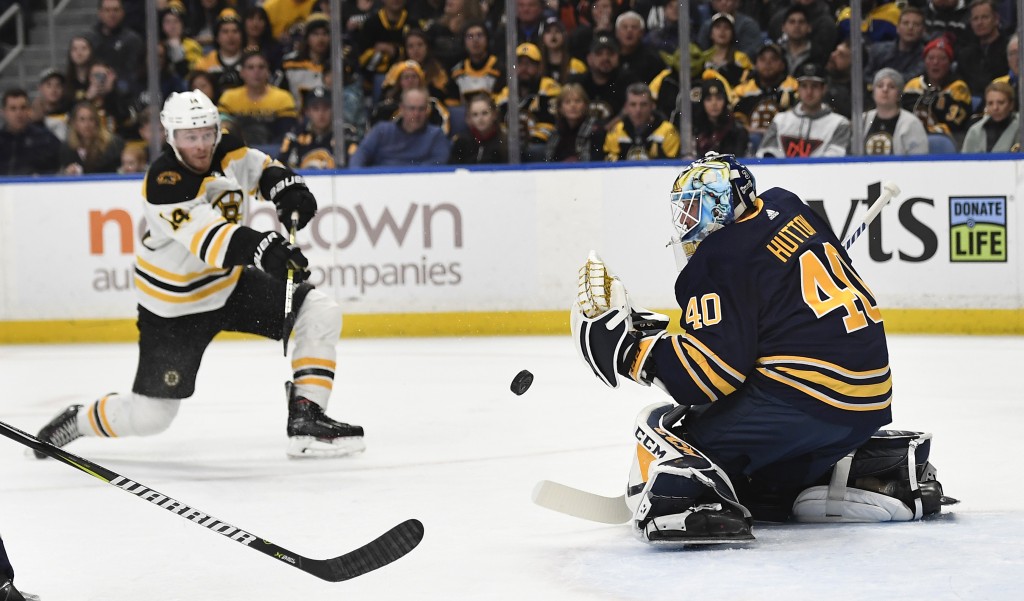 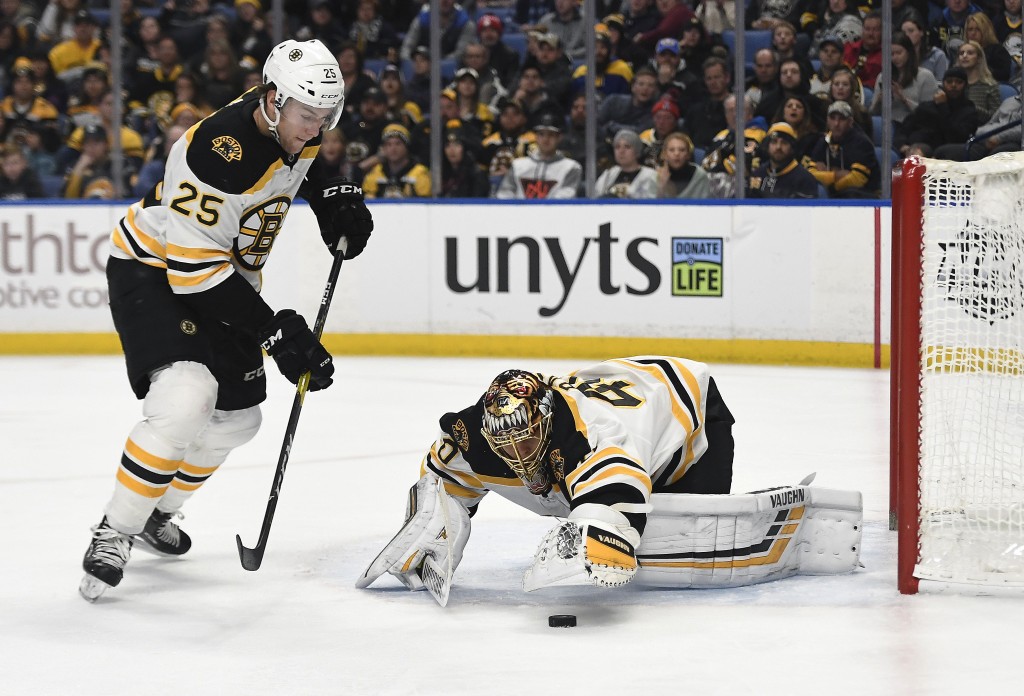 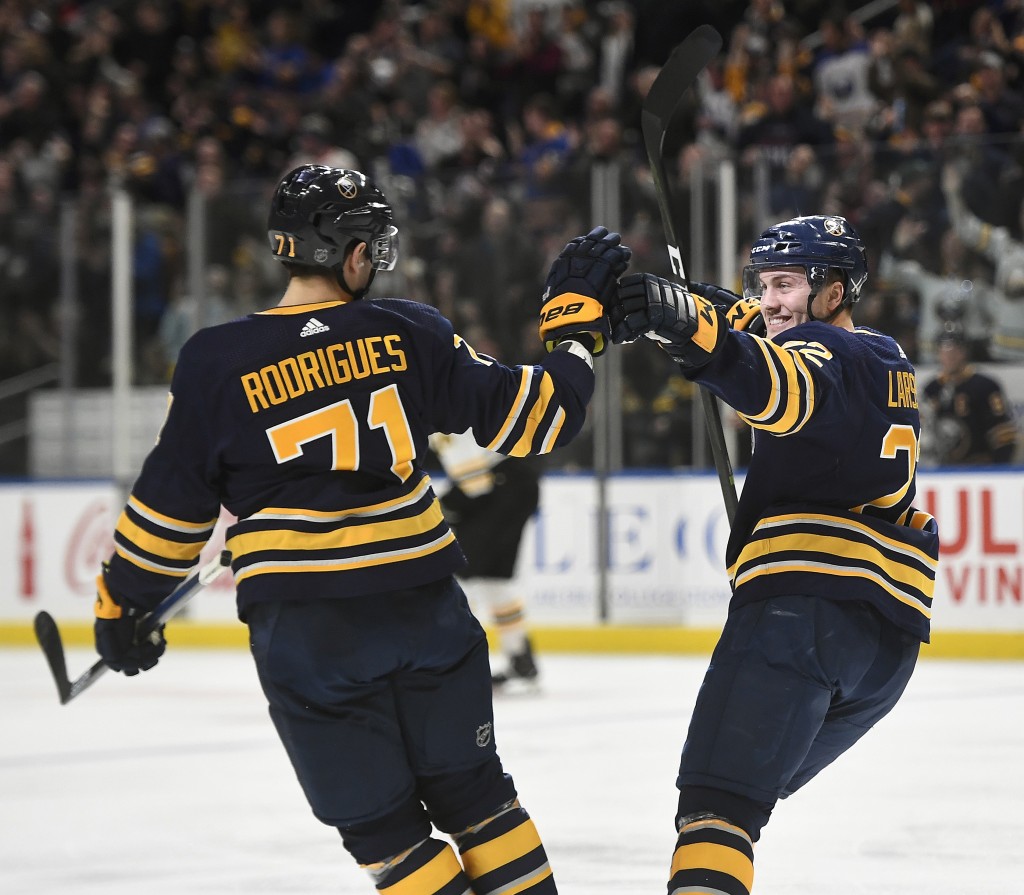 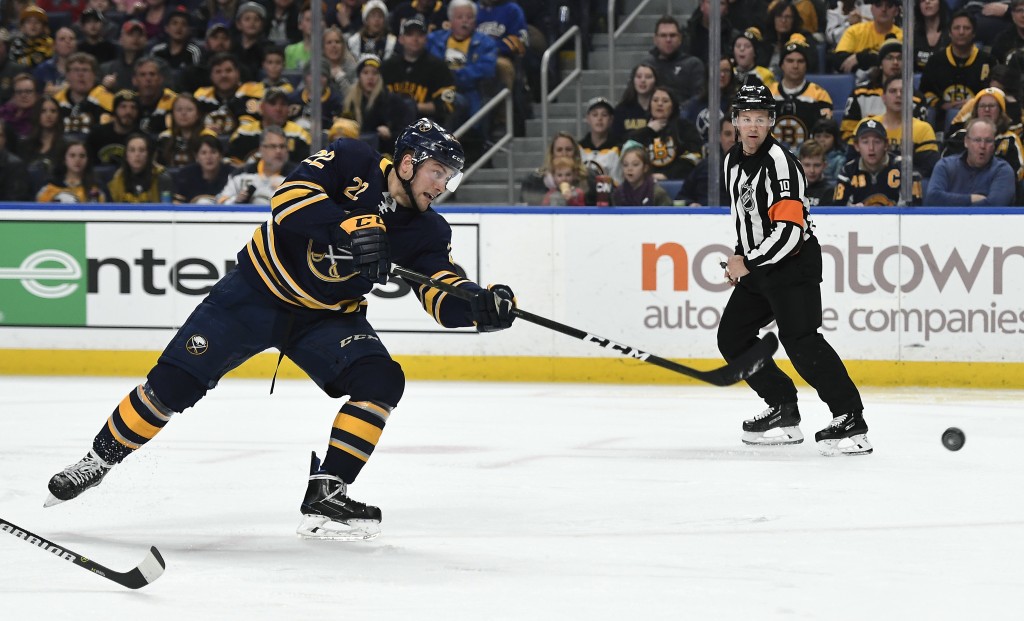 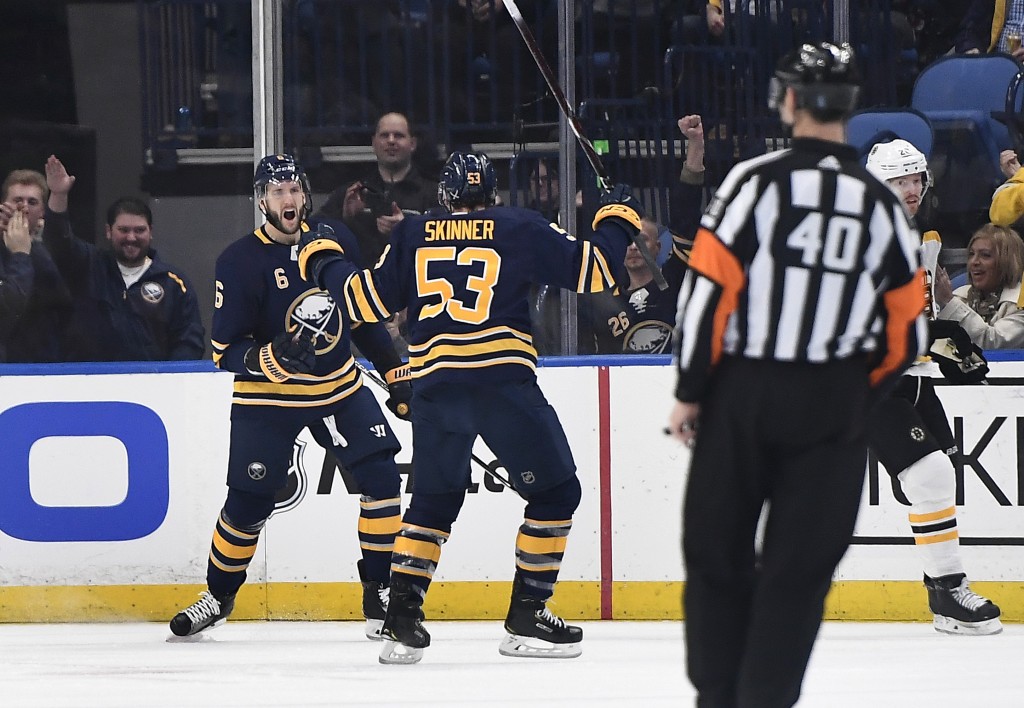 BUFFALO, N.Y. (AP) — Sean Kuraly scored 3:44 into overtime to give the Boston Bruins a 3-2 win over the Buffalo Sabres on Saturday night.

Kuraly's game-winner was a terrific one-man effort. His initial shot from the top of the left circle led to a big rebound, and Kuraly followed up with speed to chip the loose puck into the net.

The Sabres had a prime opportunity to win with a power play in overtime but were unable to test Rask in the extra session.

The Bruins poured it on in the third, outshooting Buffalo 18-5, and were rewarded with DeBrusk's power-play goal with 2:29 remaining. With Sabres defenseman Rasmus Ristolainen in the box for kneeing, DeBrusk capped a critical Bruins power play by tipping home Torey Krug's long shot from the point to make it 2-all.

Scandella opened the scoring 4:40 into the game after a big effort by Sabres leading scorer Jeff Skinner. He raced around Zdeno Chara for a partial breakaway, which was stopped by Rask before Scandella buried the rebound.

A giveaway by Skinner, however, led to Boston tying it five minutes later. Acciari's ensuing shot was off target but ricocheted off Ristolainen for Acciari's first goal of the season.

Buffalo regained the lead on a short-handed goal 5:43 into the second. With Jack Eichel in the penalty box, Evan Rodrigues connected with Larsson on a 2-on-1 for Larsson's fourth goal.

NOTES: Sabres play-by-play announcer Rick Jeanneret returned to the booth. The Hall of Fame broadcaster had a health scare a week earlier, leaving Buffalo's game against Anaheim on a stretcher and being taken to the hospital. The 76-year-old Jeanneret has done play-by-play for the Sabres on radio or television since 1971. ... Sabres center Zemgus Girgensons is week-to-week with an upper-body injury. The fourth-line center has eight points (three goals, five assists) in 35 games. ... Sabres G Linus Ullmark was scratched due to illness. Buffalo recalled goaltender Scott Wedgewood from the AHL's Rochester Americans to fill the backup role. ... David Backes (suspension) and LW Brad Marchand (upper body) were scratched for the Bruins. Backes served the first of a three-game suspension for an illegal hit to the head.

Bruins: Home against Chicago on Tuesday.

Sabres: Home against the New York Islanders on Monday.