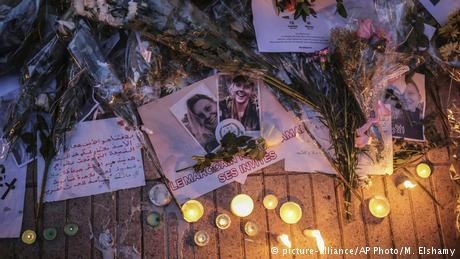 A dual Swiss and Spanish national has been detained in the Moroccan city of Marrakech over alleged links with the brutal murder of two Scandinavian tourists, Moroccan officials said Saturday.

Authorities also believe the man is involved in "recruiting Moroccan and sub-Saharan nationals to carry out terrorist plots" against foreign targets. Some of the plots would also target security forces with the aim of seizing their weapons, investigators said.

The suspect, whose name has not been revealed, lives in Morocco and follows an "extremist and violent" ideology, authorities said.

The murder of 24-year-old Louisa Vesterager Jespersen, from Denmark, and 28-year-old Norwegian Maren Ueland prompted outrage in Europe and an outpouring of grief across Morocco, which has largely been spared from brutal Islamist attacks. The impact was amplified by a video posted online, apparently showing Jespersen's death.

Morocco had already arrested 19 people over the deaths. The four main suspects, also arrested in Marrakech, were part of an Islamist cell inspired by the "Islamic State" (IS) group, officials have said.

However, Moroccan authorities have emphasized that the group did not have any contact with IS members. Last week, Interior Minister Abdelouafi Laftit described the killings as an "isolated act" committed by "lone wolves."

The Swiss-Spaniard is "suspected of teaching some of those arrested (…) about communication tools involving new technology and training them in marksmanship," Morocco's central investigative body said Saturday.

A group of detainees is scheduled to make a first court appearance on Sunday.