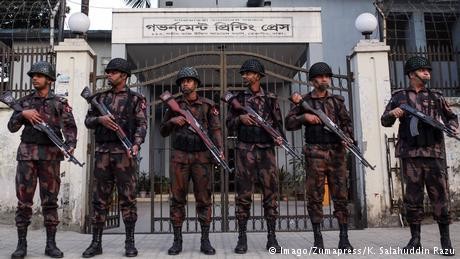 "I will cast my vote tomorrow no matter what," Shiuly, a Dhaka-based physiotherapist, told DW. The mother of two is wary of a prevailing climate of fear ahead of the Sunday polls, but she sees casting a ballot as her duty. "I think the ruling Awami League party has performed well in the past few years. It should have relied on the Bangladeshi people to win another election. Instead, the regime is responsible for creating a sense of fear among the public. Hundreds of people have been arrested, which has damaged the image of the party," she said.

But not many people in the Bangladeshi capital are as determined to vote as Shiuly. Mohammad Rafique, a rickshaw-puller in Dhaka's Farmgate area, told DW he would monitor the situation on Sunday and then decide whether it is safe enough to head to the polling center.

Social media campaigns to get out the vote

Despite fears of violence on election day, a social media campaign has urged voters to come out in large numbers.

"I expect people will turn out in droves to polling centers from the early hours on December 30, and be able to cast their votes without any intimidation or unrest," Fahmim Ferdous, a journalist based in Dhaka, told DW.

However, when observing the present political situation of the country, Ferdous is concerned that ordinary people to will face difficulties casting their vote.

"How free and fair this election will be is going to become clear within the first couple of hours. I just hope people are not deprived of their voting rights by any means," he said.

Read more: What you need to know about the election in Bangladesh

Dhaka in a state of lockdown

Squeezed between India and Myanmar, Bangladesh is one of the world's most densely populated countries, with a population of more than 160 million people. But the capital, Dhaka — a megacity of 14 million people — appears deserted ahead of election day. Shopping malls have been closed and public transport has been suspended here. The government has imposed a ban on motorcycles, a commonly used transport for the majority of residents. Mobile phone and internet services have also been scaled down without any prior notice.

The polling begins at 8 am local time on Sunday. The government has set up more than 42,000 polling centers across the country, with more than 104 million Bangladeshis eligible to cast their vote on Sunday, nearly one-third of whom are eligible to vote for the first time.

The authorities have also deployed more than 50,000 soldiers in the capital as fears of Islamist attacks remain high in the Muslim-majority South Asian nation.

While Prime Minister Sheik Hasina's Awami League party enjoyed a free hand to campaign for the crucial vote, the country's main opposition party, the Bangladesh Nationalist Party (BNP), claimed that more than 10,500 of its active members have been arrested since the election schedule was announced in November.

At least 28 BNP candidates have been injured during the election campaign, which had turned violent in many parts of the country. Two BNP members have also been killed in clashes with ruling party supporters.

Sheikh Hasina has led the Awami League party since 1980. It is one of the two largest parties in the country and has ruled the country since 2008. Hasina's main opponent is Khaleda Zia, leader of the BNP. The BNP boycotted the last national election in 2014.

Zia is currently incarcerated on corruption charges, which her backers say are politically motivated. She has also been disqualified for running in the election due to her legal issues.

"The government wants a one-sided election. It has arrested thousands of our party members on false charges in the past few weeks. Many of our nominated polling agents have also been arrested," Ruhul Kabir Rizvi, BNP's senior joint secretary, told DW.

Both Zia and Hasina have served as the prime minister of Bangladesh at some point since democracy returned to the country in 1990. The founder of the modern Bangladesh, Sheikh Mujibur Rahman, was assassinated with most of his family members in a military coup on August 15, 1975. The country spent 15 years under military rule after the assassination and, although democracy was restored in 1990, the political scene remains volatile.

The United Nations, the United States and European Union have called for a "peaceful, credible and inclusive" general election in Bangladesh, but some experts are of the view that the international community hasn't used its clout to ensure fair elections in the country.

"I am not satisfied with the role of the international community with respect to the election in Bangladesh. Although they have rightly praised PM Hasina for her administration's role in dealing with the Rohingya crisis, they have wrongly decided to support a 'dictator,' which is probably a convenient thing to do," Shahidul Alam, an award-winning photographer, told DW.

"The support for democracy is rhetorical; in reality the international community has done very little to ensure it," said Alam, who was recently released from jail after spending over 100 days behind bars for supporting an anti-government student protest.

"Because Hasina has delivered on some of the things that are important for the West, namely the war on terror and economic interests, the international community has chosen to look the other way," Alam said.

Rights group Amnesty International has urged Bangladeshi authorities to investigateattacks on journalists and activists ahead of the country's 11th parliamentary elections. On December 24, at least 12 journalists came under attack by a group of 30 to 35 men, allegedly supporters of the ruling party.

"The authorities must impartially investigate these attacks and bring the perpetrators to justice. Such incidents are detrimental to a peaceful atmosphere for people to exercise their civil and political rights," Saad Hammadi, Amnesty International's South Asia Campaigner, said in a statement.

"We are afraid to send out our reporters to different polling stations," Haque told DW. ''Our reporters have been assaulted in the past. Their right to enter polling stations and observe the election process has also been denied by the government," he added.

However, Bangladesh's election commissioner Rafiqul Islam said that attacks on journalists would not be tolerated. "Also, there are no restrictions on journalists that are covering the election. They can report freely," Islam told DW.