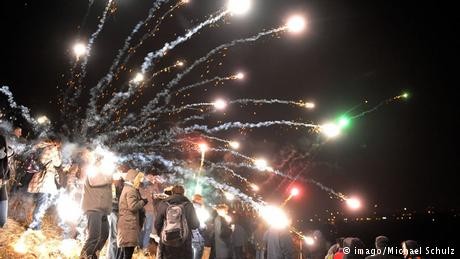 Germany's environment agency on Saturday called on people not to use fireworks to ring in 2019. It said Germans bought about €137 million ($157 million) worth of fireworks last year, creating 4,500 tons of fine dust particulates in the air.

"This corresponds to about 15.5 percent of the particulate matter emitted by road traffic each year," agency chief Maria Krautzberger told the Rheinische Post newspaper.

Krautzberger spoke about alleged health consequences to persuade people to rein in their use of fireworks.

"The effects range from temporary impairments of the respiratory tract to an increased need for medication in asthmatics to respiratory diseases and cardiovascular problems."

Some lawmakers, such as CDU environmental spokeswoman Marie-Luise Dött, are against a general fireworks ban. She says particulate matter (PM10 — particles measuring less than 10 microns in diameter) is a temporary burden which accounts for just two percent of the annual emissions from humans.

The amount of time particulate matter remains in the air after a fireworks display depends on several factors. Strong wind, for instance, helps disperse the pollution rather quickly. The Federal Environment Agency highlighted the difference a windy day can make in a comparison between New Year's celebrations in 2009 and 2013. Rain can also have an effect.

Several German cities, such as Hanover, Dusseldorf and Dortmund, will deploy extra police officers this New Year's Eve to enforce existing bans on setting off fireworks.

In North Rhine-Westphalia, about 5,500 police officers will be on duty to prevent a repeat of scenes from 2016 when hundreds of robberies and sexual assaults were reported in the city of Cologne.

In the capital Berlin, however, an attempt for a total fireworks ban in certain areas failed.

Extended bans would be difficult to enforce, according to GdP police union chief, Oliver Malchow. "Already thousands of my colleagues around the turn of the year are working nationwide to ensure security and order."

"We should respect fireworks as a custom," said CEO of the German Association of Towns and Municipalities, according to tagesschau.de. In Germany, it is a long-standing tradition to welcome the New Year with fireworks. "People are expressing their zest for life, but also their hope for a happy new year," he said. "We should accept that."