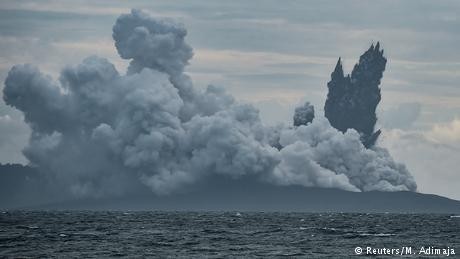 Indonesia's Anak Krakatau volcano, whose eruption and collapse last week caused a tsunami that claimed the lives of more than 420 people, is now only about a quarter of the size it was before its outburst, scientists say.

The height of the volcano was just 110 meters (360 feet) on Friday, compared with 338 meters in September, the Center for Volcanology and Geological Disaster Mitigation said. The island has also lost three-quarters of its volume, according to the center, having shed between 150 and 180 million cubic meters (5.2 billion-6.3 billion cubic feet) of material since the eruption on December 22.

Japan's space agency has released before-and-after satellite images showing that a 2 square kilometer (0.77 square mile) piece of the volcanic island has collapsed into the sea.

The scale of the island's collapse corresponds to the power of the tsunami it unleashed on more than 300 kilometers (186 miles) of coastline in Sumatra and Java, where waves of 2 meters or higher were experienced.

Anak Krakatau, which means "Child of Krakatoa," emerged around 1928 in the crater left by its forerunner, the infamous Krakatoa volcano. Krakatoa had erupted in 1883, killing at least 36,000 people and setting off a period of global cooling owing to the ash it propelled into the atmosphere.

Despite the reduction in Anak Krakatau's mass, which experts say means that any tsunami it produced now would be less severe, authorities have warned residents to stay at least a kilometer away from the coastline of the Sunda Strait, the body of water separating Java and Sumatra.

Indonesia is one of the most disaster-prone regions on earth, as it sits on the so-called Pacific Ring of Fire, a belt of frequent volcanic activity caused by the collision of tectonic plates.