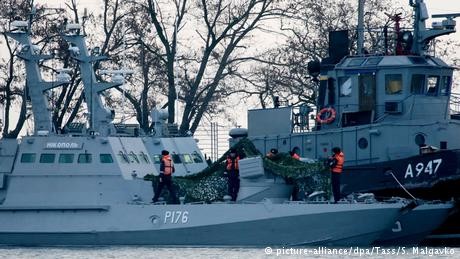 The capture of Ukrainian sailors in the Kerch Strait is "illegal," German Chancellor Angela Merkel and French President Emmanuel Macron said in a joint statement on Friday. The two leaders also slammed Russia's "abusive" naval controls in the Sea of Azov after its navy seized three Ukrainian vessels in the disputed waters off Crimea last month.

"We demand safe, free and unimpeded transit for all ships through the Kerch Strait and the immediate and unconditional release of all illegally detained Ukrainian seafarers," Merkel and Macron said.

"They too should be able to celebrate the upcoming festivities with their families," the leaders of France and Germany said, referring to the New Year celebrations and Christmas, which is marked on January 7 in Ukraine and Russia.

Merkel later reiterated the demand to free the sailors in a telephone call to Russian President Vladimir Putin.

Read more: More conflict ahead for Russia and Ukraine in 2019?

Russia seized Crimea from Ukraine in 2014 and subsequently imposed controls for vessels navigating the Kerch Strait, a narrow passage linking the Sea of Azov and the Black Sea near the disputed peninsula.

Ukraine, however, still views Crimea as its own territory and claims the right to deploy ships in the area based on a 2003 deal with then-friendly Moscow.

On Friday, Ukrainian Defense Minister Stepan Poltorak said that Ukraine would continue to use the Kerch Strait for navigation.

"This will always be so, because the Sea of Azov is a part of Ukraine," Poltorak said, according to the defense ministry's website.

"We will definitely not give up our right of free navigation through the Kerch Strait in accordance of all international rules and laws," he added.

Read more: What you need to know about the conflict in the Sea of Azov

Ukrainians 'no prisoners of war'

The Ukrainian sailors are currently being held in a Moscow prison. After their capture at sea, Russian courts ordered a two-month pre-trial detention against the men on suspicion of "illegal border crossing."

Earlier this week, the sailors declared themselves to be prisoners of war and refused to give statements. On Friday, however, Vladimir Putin's spokesman rejected this view.

"There are no prisoners of war on Russian territory, this is about an investigation related to foreign citizens violating the Russian national border," Dmitry Peskov told reporters.

Ukrainian forces are also engaged against pro-Russian rebels in eastern Ukraine. Despite recent tensions with Moscow, the Kyiv government and the rebel officials are preparing for a truce which is set to start at midnight local time on Saturday. The truce is expected to last at least until January 7, but it could also continue past the Orthodox Christmas, according to the Organization for Security and Cooperation in Europe (OSCE).

In their Friday statement, Macron and Merkel welcomed the ceasefire deal, saying it would give a chance to both sides to "focus on the needs of the civilian population." The duo also called for establishing a secure area to allow for delivery of aid, saying that civilians had "already suffered much too long from the conflict and its consequences."