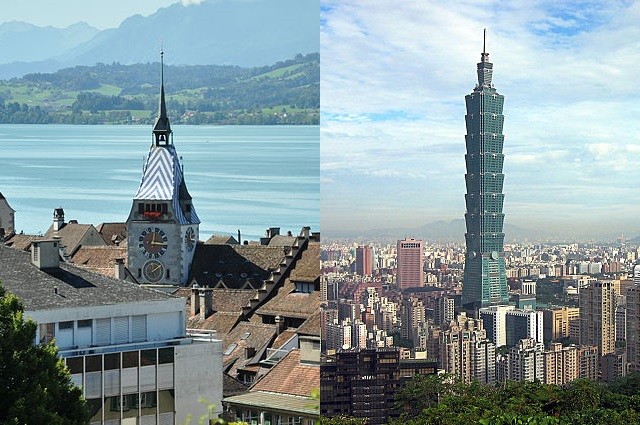 TAIPEI (Taiwan News) – How does Taiwan become the Switzerland of the east? We must think about Taiwan and look at Switzerland’s small government, low taxes, optimal land use, safety, and honest practices.

Switzerland’s Canton of Zug is an Economic Hub

Switzerland is a mountainous country, and when looking up, one might think of them as mountains of gold. Taiwan is also mountainous place, but Taiwan’s mountains look desolate.

For the ninth consecutive year, Switzerland was ranked the world’s most competitive economy by the World Economic Forum’s Global Competitiveness Report. According to the 2018 report, Switzerland was followed by the United States, Singapore, the Netherlands, Germany, Hong Kong, Sweden, the United Kingdom, Japan and Finland.

Switzerland has 26 cantons, or federated states, with an average annual income of US$80,000 (NT$2.45 million). The annual income in the canton of Zug is US$165,000, double the national average. The canton has a population of 30,000 and only 21.63 square kilometers of land, but hosts a large number of multinational companies.

The tax rate of the canton of Zug is 4 percent, lower than the federal rate of 8.5 percent. With small government and low taxes, the canton has become a hub of the Swiss economy. This might be a model for Taiwan to implement reform to lower taxes, and consequently reduce control over the people. Capital moves from regions of high tax, to regions of low tax.

High-speed rail around the island to optimize land

The Swiss population is one-third of Taiwan's, and its area is 1.2 times that of Taiwan. According to Switzerland’s Federal Statistical Office, the country’s railway totals 5,124 kilometers, 3.59 times more than Taiwan.

Switzerland is a railway-intensive country with world-renowned scenic routes. The country has 2,124 train stations, all of which are economic areas. Irrespective of city or country, for the most part people can take the high-speed rail anywhere.

In terms of construction, population and rate of return on investment were not the sole considerations, but rather, ideas around the railway network as a whole, national land optimization, carrying capacity, safety and comfort, carbon emissions, and power effects were central.

When thinking about national development policy, Taiwan can have global, contemporary, and breakthrough thinking and ideas. Creative ideas do not just resolve existing problems, but can create favorable circumstances and innovation. Revenue from private transport should subsidize public transport as part of a long-term solution.

Taiwan has grasped safe, honest, and practical policies before. The implementation of zebra crossings, where pedestrians have right of way, and the punishment system for those caught cheating public transport are examples.

A good country makes good use of trends and creates opportunities for the nation. Imagination is a form of national strength and national competitiveness; we must all use our brains together.

I hope that in 2019 Taiwan makes steps to become the “Switzerland of the east.” After one century, or a few decades, Switzerland might hope of becoming the “Taiwan of the west!”

“But Jesus looked at them and said, ‘with man this is impossible, but with God all things are possible.’” (Matthew 19:26)

Wu Chin-sheng is head of the international division and council member of Taiwan Society North (台灣北社), and publisher of Brain magazine (動腦).