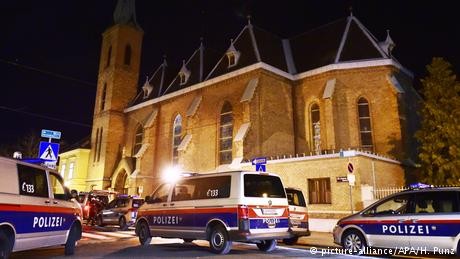 Five monks have been assaulted at the Maria Immaculata church in Vienna's Floridsdorf district, with one suffering head injuries.

Two assailants, one armed with a pistol, beat a 68-year-old monk and then overwhelmed four others as they came to help, police spokesman Harald Sörös told Austria's APA news agency.

Police were notified three hours later and found the five clerics — the youngest aged 56 — tied up. They were all taken to hospital. The eldest had suffered head wounds, possibly from a metal bar.

A sixth man was also held in an adjacent office but not hurt, police said.

At the time, no church service was taking place.

Vienna's Catholic Cardinal Christoph Schönborn said he was "deeply disturbed" by the incident.

"Churches are places of peace and care; we're especially conscious of this at Christmastime … I pray for the rapid recovery of the victims and repentance by the perpetrators," he said.

Despite a large manhunt into Thursday evening, police have not yet found the assailants, who reportedly demanded cash and valuables from the monks. Söros ruled out terrorism as a motive for the attack.