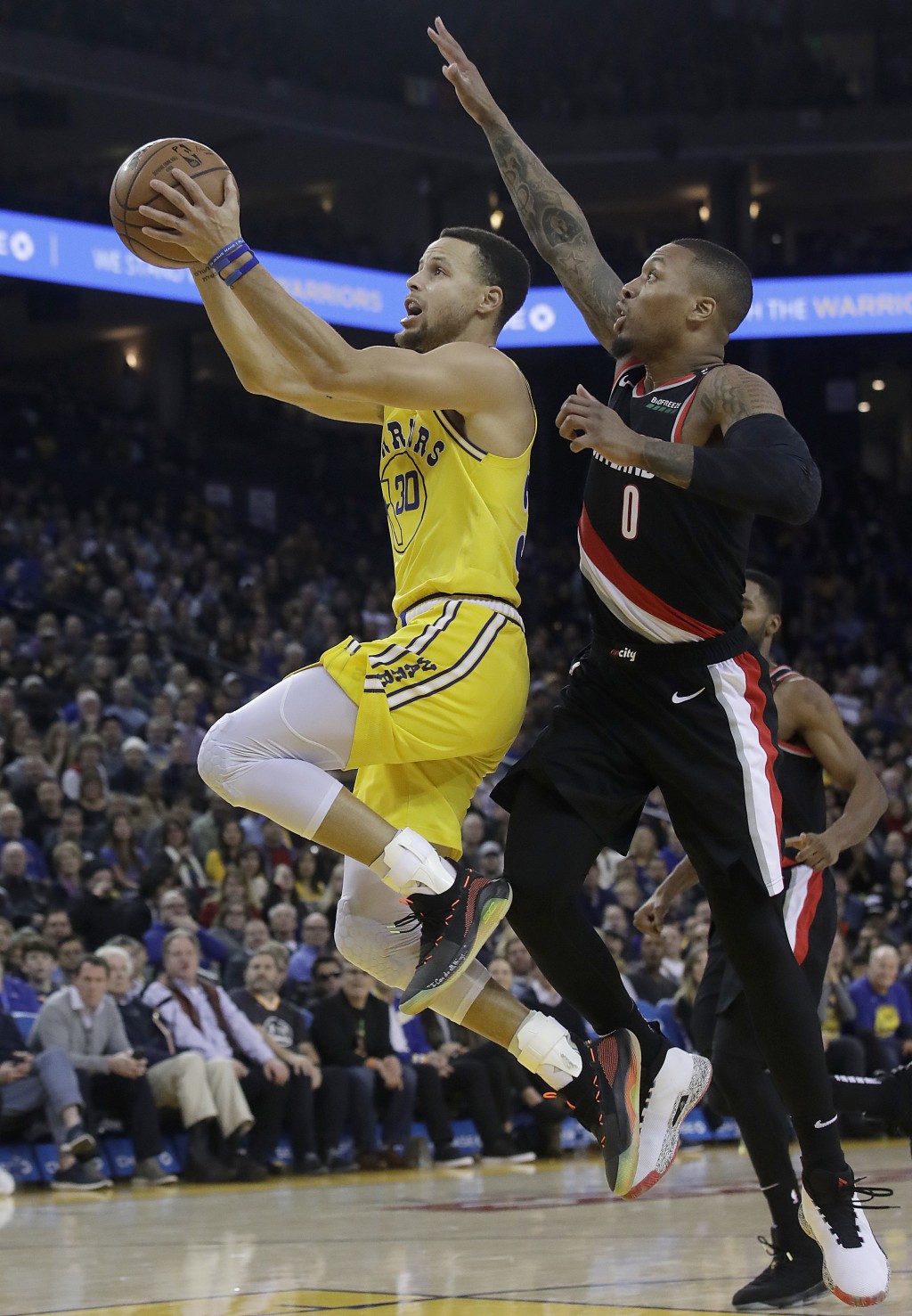 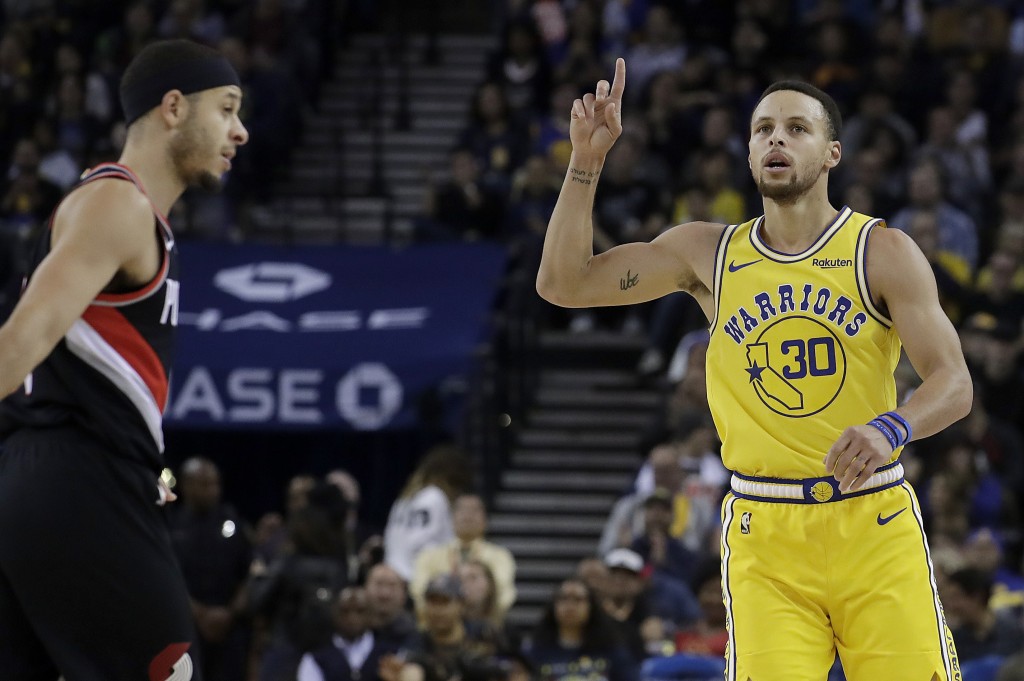 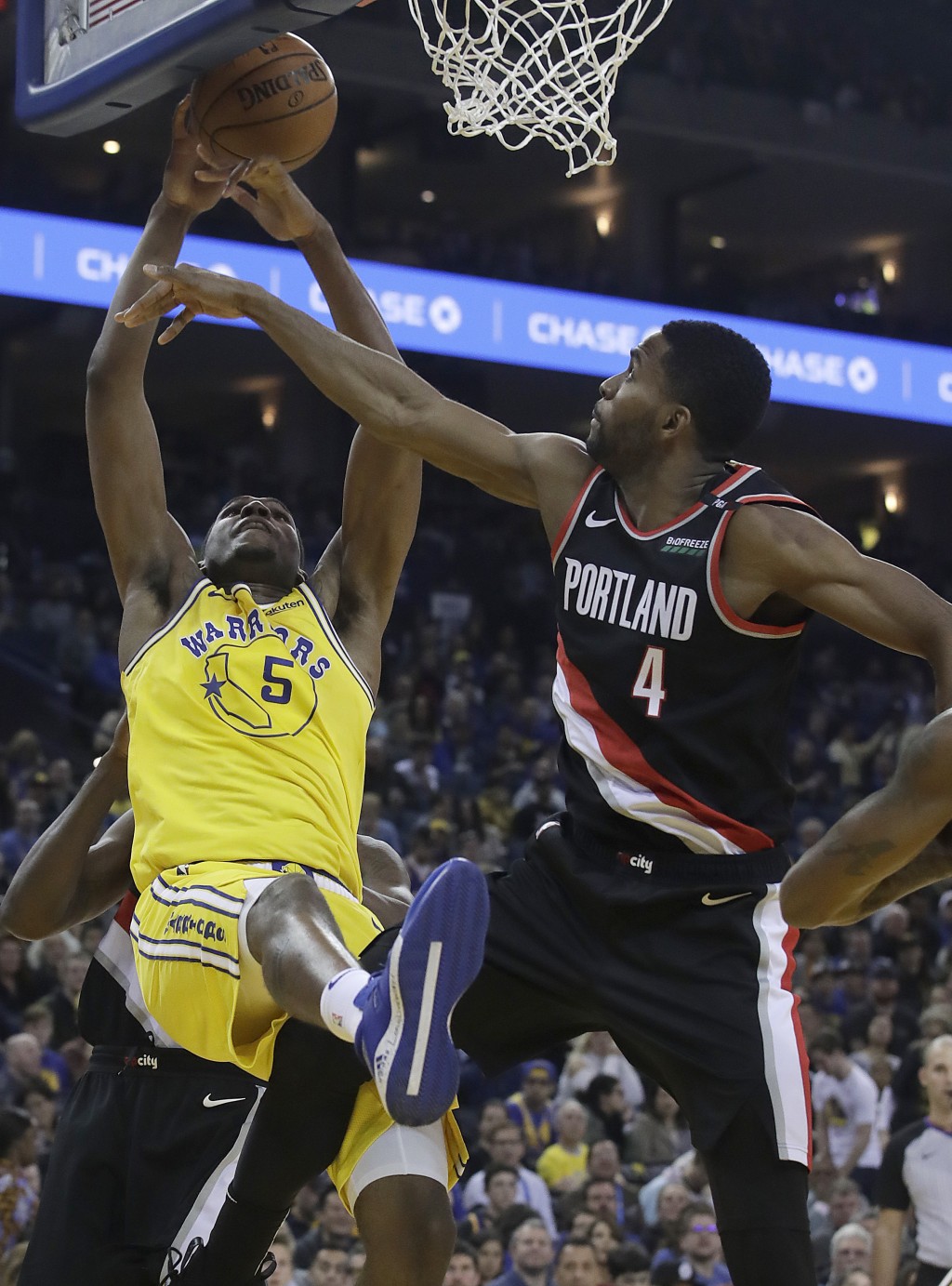 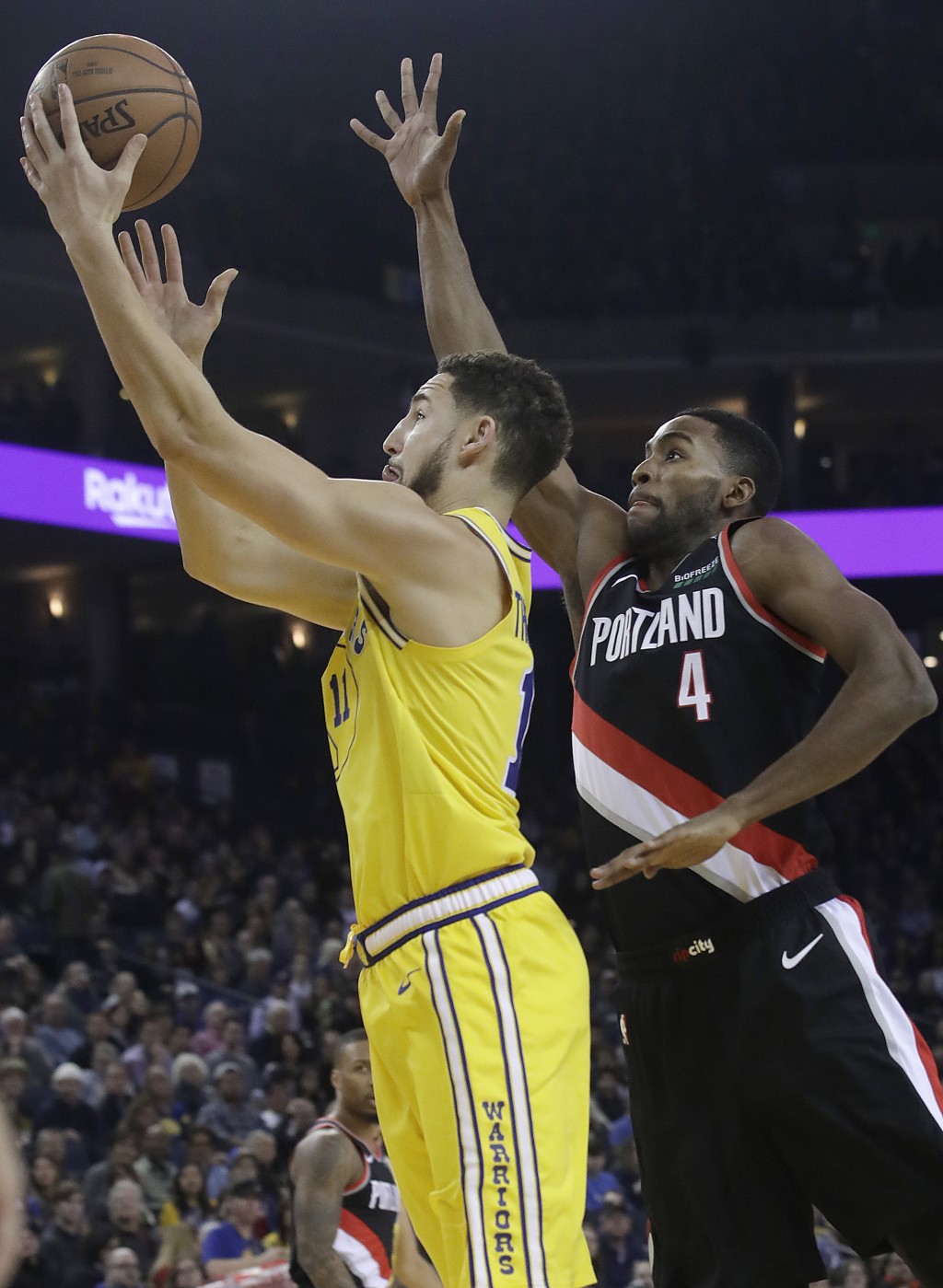 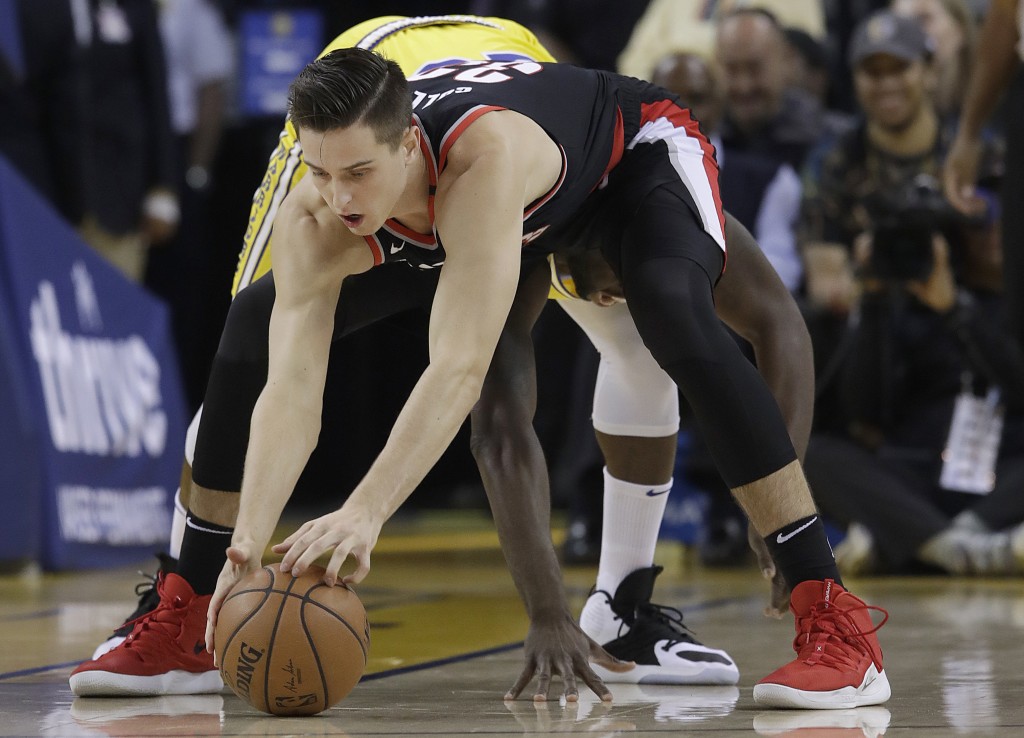 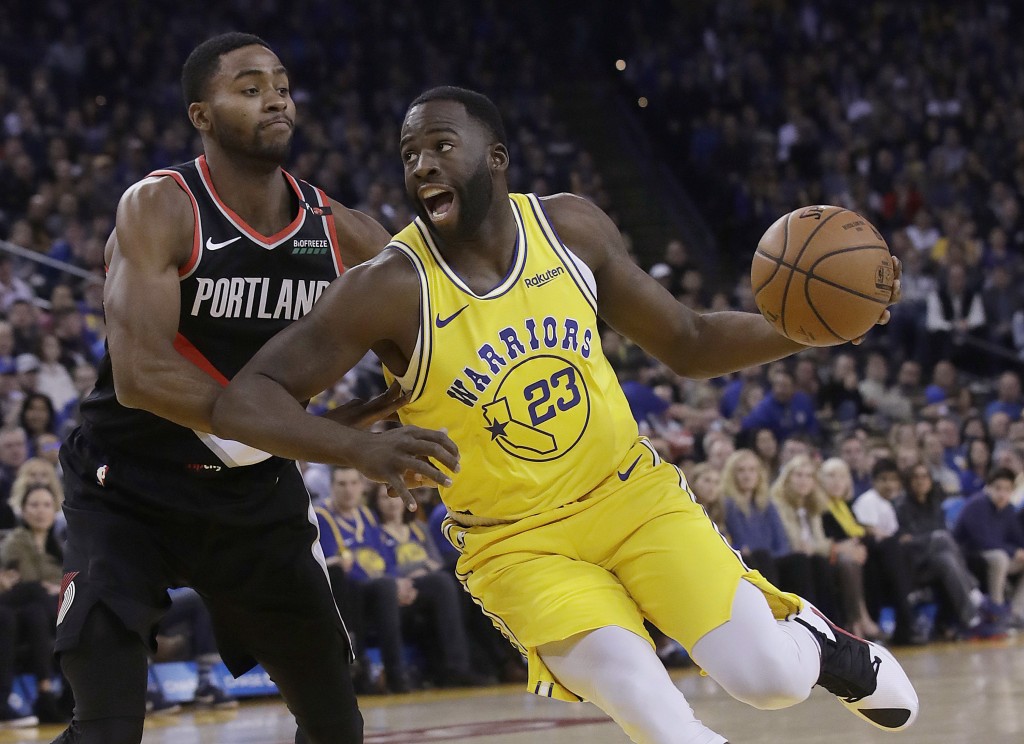 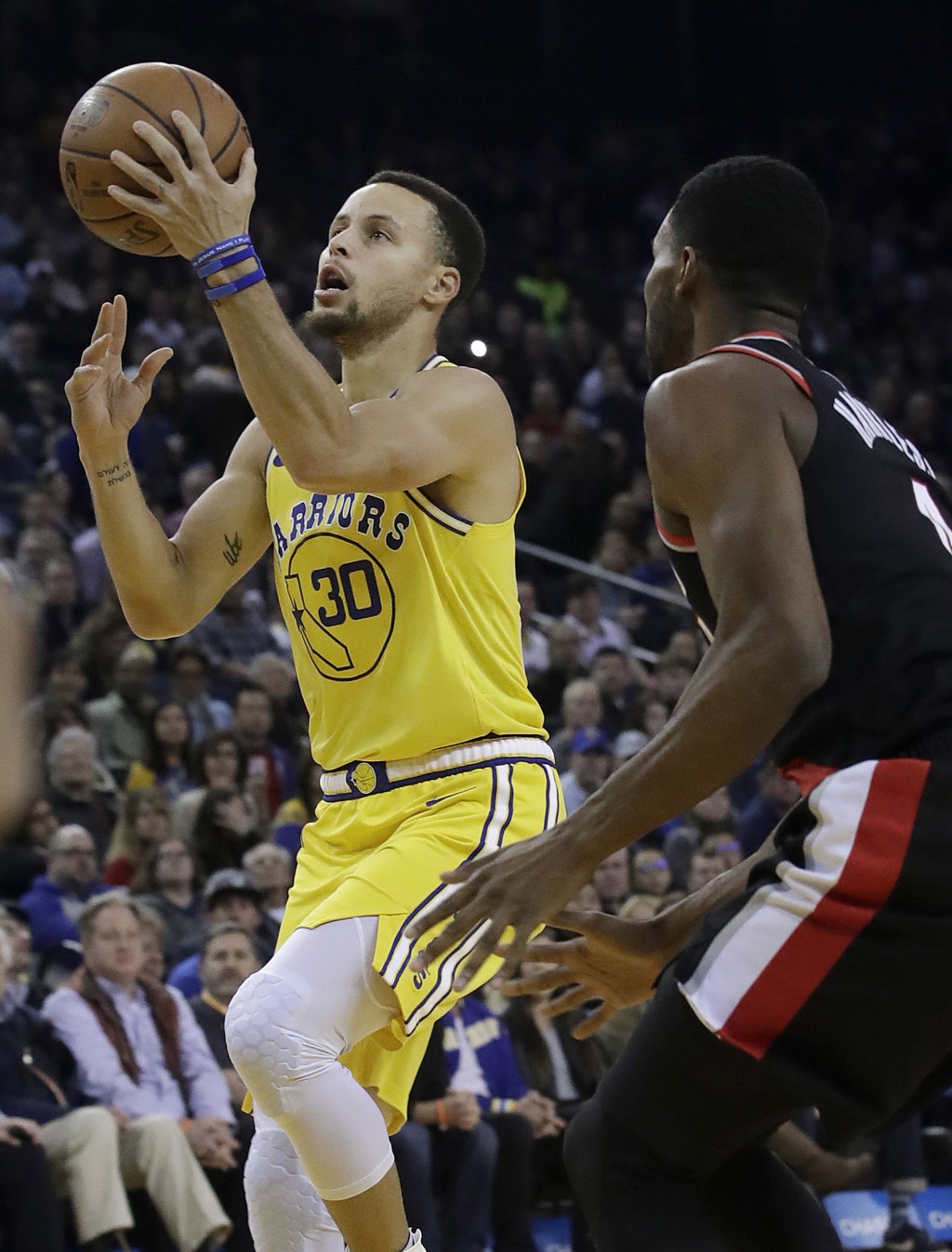 OAKLAND, Calif. (AP) — Damian Lillard hit a go-ahead 3-pointer with 6.3 seconds left in overtime and scored 21 points in his final regular-season game at home in Oakland, sending the Portland Trail Blazers past the Golden State Warriors 110-109 in a wild one Thursday night.

Kevin Durant missed a 13-footer off the front rim as the final buzzer sounded but finished with his second triple-double of the season: 26 points, 11 assists and 10 rebounds.

Jusuf Nurkic had 27 points and 12 rebounds for the Blazers.

Durant hit a tying 3-pointer with 19 seconds left in regulation following a driving one-handed dunk the previous possession but the Warriors couldn't overcome a comedy of errors in losing a second straight at home. They took a 127-101 beating from the Lakers on Christmas night.

Seth Curry largely outplayed big brother and Golden State star Stephen down the stretch, scoring 11 straight points. In fact, their sister, Sydel posted on Twitter: "Wouldn't have been mad at all at a Seth game winner."

Lillard shot 7 for 20 with friends and family cheering him in the Blazers' final scheduled trip to Oracle Arena before the Warriors move to San Francisco next season.

Stephen Curry made a 3-pointer with 10:46 to play in regulation, then his little brother Seth rattled off 11 in a row with three consecutive 3s.

Klay Thompson's shooting struggles continued. He went 6 for 19 and was just 2 of 9 on 3-point tries on the way to 15 points. He made a 3 late in the third and was fouled, drawing a rousing ovation, then missed the free throw.

Curry's 33-footer with 8:42 left in the third on a pass from Draymond Green got Golden State within two, then Curry found Green for a tying layup the next time down to make it 55-all.

A series of silly mistakes followed: Thompson made a steal and threw it toward midcourt and Green couldn't keep the ball from going over the line for a backcourt violation, as Portland regained possession. Then, Green clanked a one-handed dunk try off the back of the rim. This after he had earlier thrown a pass off Thompson's head.

The Warriors missed nine of their initial 11 free throws and finished an uncharacteristic 6 for 15 at the line.

Both teams were trying to rebound from embarrassing Christmas losses two days earlier in which the 3-point shooting was dismal: Golden State following that flop to the Lakers at home and the Blazers a 117-96 defeat at Utah.

Portland coach Terry Stotts said whichever team lost this game at least would get another chance right away with the rivals playing twice in a three-day span. The Warriors beat the Blazers 125-97 on Nov. 23 at Oracle Arena.

In his last five games against the Warriors, Lillard has averaged 31 points, shooting 42.4 percent and 38.8 percent on 3s.

"I represent this city, so when I come here I want to represent myself well. I have a lot of family and friends coming to see me play, so you're excited about that. You've got energy, that's what it is, "Lillard said. "And they've been one of the best teams in the league, so you want to beat them. To do that you've got to put your best foot forward."

When Lillard was 9 or 10, he came to a Rockets-Warriors game with his brother and lucked into getting to take a shot on the court.

"My brother and I were up at our seats and Steve Francis was doing his pregame workout and the ball bounced up and into the stands and I ran down the stairs and got it and I was going to throw it back and he was like, 'No, come shoot it.' And I went on the court and shot a 3 and airballed. That's the story."

He used to walk to the games he lived so close in East Oakland.

Lillard clearly had mixed emotions about the Warriors' upcoming move, saying: "You wish it wasn't happening. You know how much it means to the city of Oakland to have something positive happening, especially with the team having so much success right now. ... So it's sad to see them moving on."

Trail Blazers: Seth Curry quickly threw up his hand acknowledging his foul on brother Stephen early in the fourth. Seth made ... Portland pushed Golden State into nine first-half turnovers while committing just two. ... The Blazers were 21 of 23 on free throws.

Warriors: Durant has scored 20 or more points in his last nine games 23 of 24. ... The Warriors dropped to 11-3 at home against the Western Conference. ... Golden State lost by 20-plus points at home twice in the previous six seasons but has done it four times already.

Trail Blazers host Warriors on Saturday. The Warriors last played an opponent in two straight regular-season games against the Lakers on Nov. 23-25, 2016.