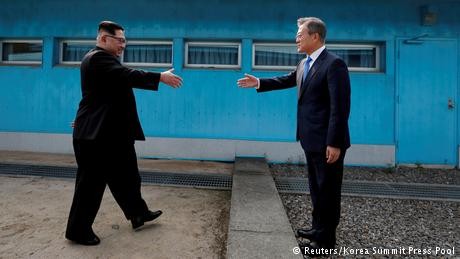 After the historic meeting in June between US President Donald Trump and North Korean leader Kim Jong Un in Singapore and the declarations that followed, expectations ran high. But the Korean crisis is simply too complex for a quick fix.

Everything has to change, but no one wants to make a move to make it happen. This impasse, hopefully, comes to an end next year. If one takes a closer look, a lot has already happened, especially between the two Koreas.

Step by step to agreement

Despite the obstacles in their way, Seoul and Pyongyang seem determined to move the rapprochement forward. Several initiatives have so far failed because of the realities on the ground, which have evolved over decades.

International sanctions against Pyongyang continue to be in place for the time being. And as long as they remain in place, a more intensive economic cooperation between the North and the South is out of the question.

The international community, particularly the US, wants to maintain the sanctions until North Korea implements the required concrete and irreversible disarmament measures.

North Korea, for its part, is calling for the sanctions to be relaxed in return for the concessions it has so far granted.

And as long as Pyongyang does not receive any credible security guarantees, it will not give up its trump card, namely its nuclear weapons. This stalemate can probably be resolved at a new summit between Trump and Kim, which will likely take place in the spring of 2019.

The way is the goal

On the other hand, the comparatively small achievements realized in recent months, which were unthinkable just a few months ago, give cause for optimism.

After years of escalation, both sides managed to put an end to the spiral of confrontation. Now, high-ranking delegations and even heads of government meet almost regularly.

Efforts are being made to eliminate the potential sources of danger at the inter-Korean border.

Both Koreas have withdrawn their troops from some military posts along their heavily fortified border, begun removing landmines buried in the region and reactivated a telephone hotline between their two leaders, which is supposed to prevent any untoward provocations from escalating into a full-blown conflict.

Seoul and Pyongyang would very much prefer forging a more intensive economic partnership. Both sides, for instance, want to put the Kaesong special economic zone back into operation and create a linked, cross-border railway network between the two Koreas.

The UN Security Council has slightly relaxed international sanctions to allow the South to examine the state of North Korea's railway network, but the sanctions remain in force.

The importance of a cross-border train service for the two Koreas would not just be symbolic. Whenever international sanctions against the North are lifted, export champion South Korea could use the train network to transport goods not just to the North, but also to China, via the Gyeonggui line along the west coast, and to Russia, via the Donghae line along the entire east coast. So far, there has been talk just of transporting goods. It will certainly take a long time before people can freely travel back and forth between the two parts of Korea.

However, the 93,000 Korean family members living separately on either side of the border no longer have this time. Around 12,000 of them are over 90-years old.

There have to be more family reunions as soon as possible in the coming year so that parents, children and siblings can meet their relatives across the border for at least a few hours – otherwise it will be too late forever.

North Korea also actually has to begin its "denuclearization." The US will no doubt continue to exert the necessary pressure to bring about this outcome. China, the emerging global super power, will be responsible for ensuring North Korea's security.

Over the past year, Kim has managed to improve Pyongyang's relations with Beijing. The North Korean leader has been regularly sending high-level delegations to China and he has himself traveled to Beijing thrice, underlining the important role China plays in the international community's dealing with the North. Chinese President Xi Jinping is likely to visit North Korea next year, a trip that would not only be a diplomatic feat for Kim, but also send a clear message to Washington as to who the leading power in Asia is.

The old superpower US and the new power China will have a decisive influence also in the coming year as to what happens on the Korean Peninsula. But the final decision should and will be made by the Koreans themselves.

The relationship of trust that the South Korean president and the North Korean leader have developed in recent months serves as a strong foundation.

With courage and skill, Moon and Kim brought movement to a completely deadlocked conflict and took decisive steps to achieve rapprochement.

"If one is not patient with small things, one brings large projects to failure," Confucius once taught.

Moon's policy of small steps – based on former West German Chancellor Willy Brandt's "Change through rapprochement" – bears fruit, despite all adversities. This will likely pay off in the coming year.

Europe, and above all Germany, should not only play a spectator role, but actively support the developments in the region. That's also what the Koreans want.

In the coming year, Germany will celebrate the 30th anniversary of the fall of the Berlin Wall; it now knows very well how laborious, but also valuable, it is to integrate a divided country.

Even if the situations of Germany and Korea are comparable only to a limited extent, it's safe to say that Germany has gained valuable experience on how a peaceful rapprochement can succeed, and this can help the Koreans avoid similar mistakes.