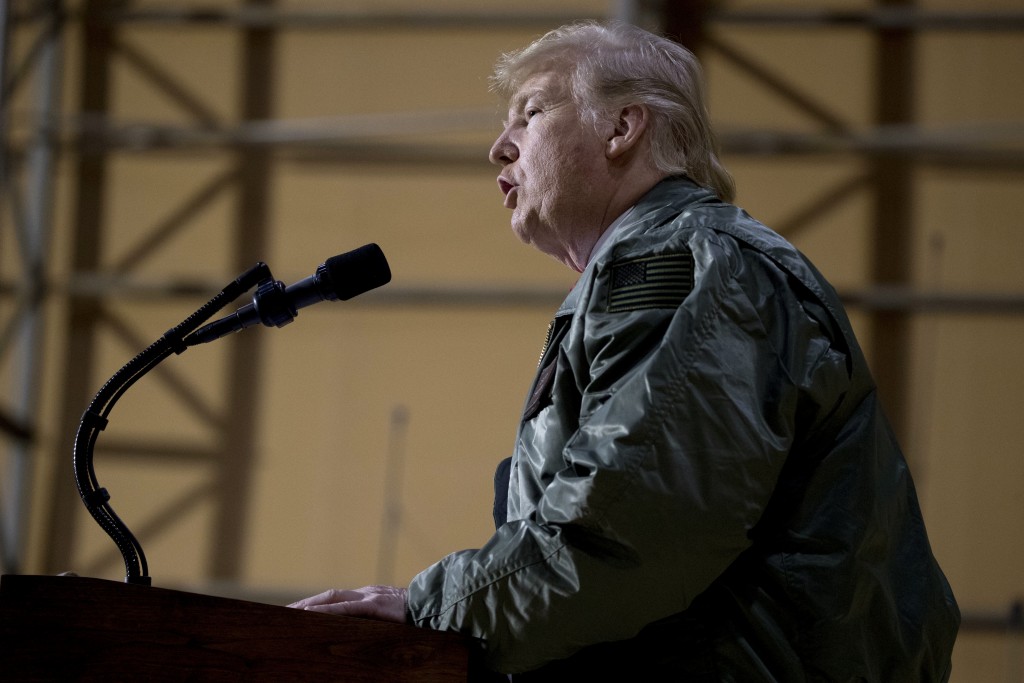 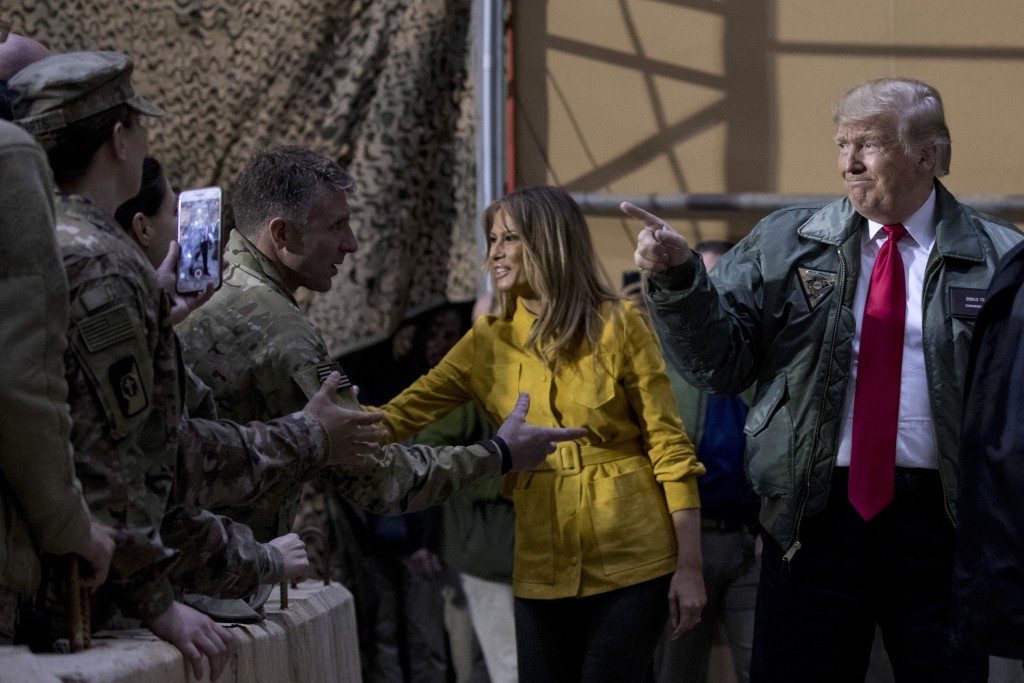 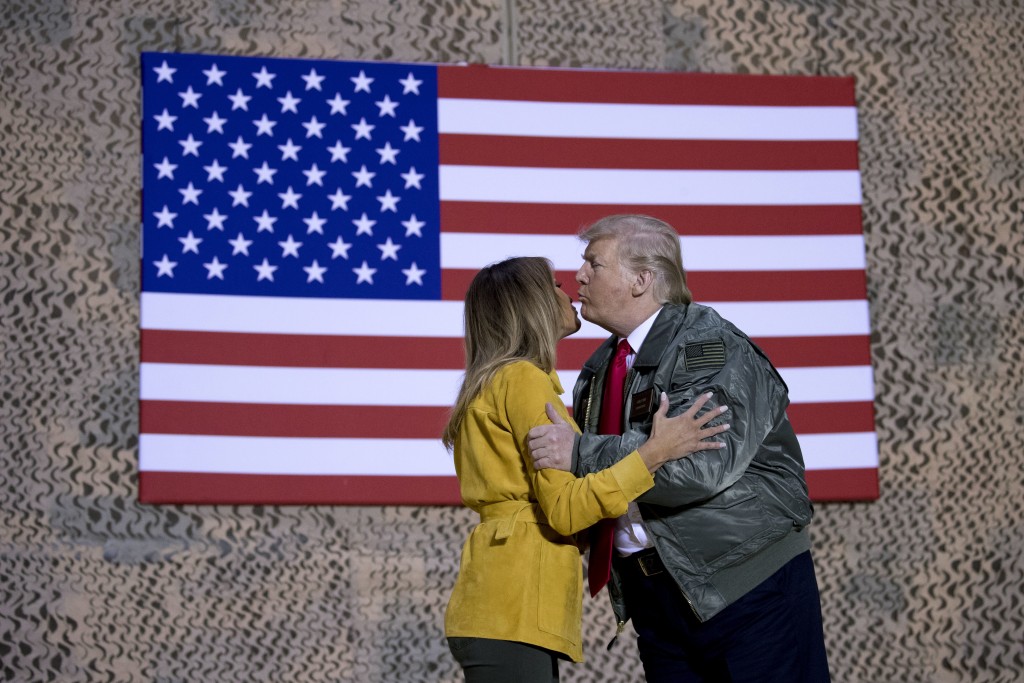 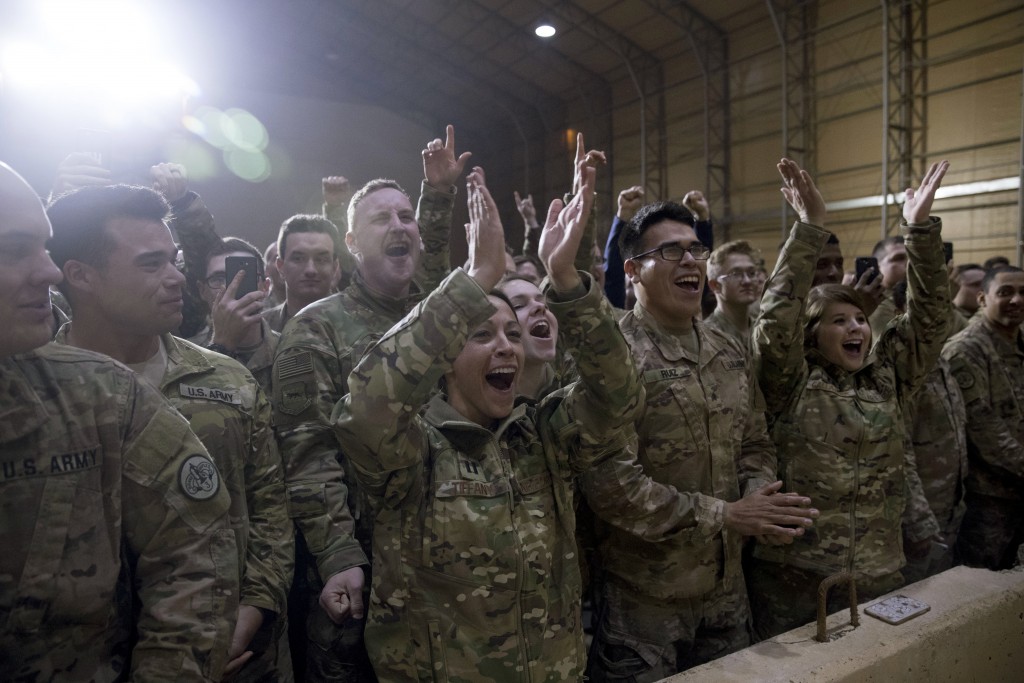 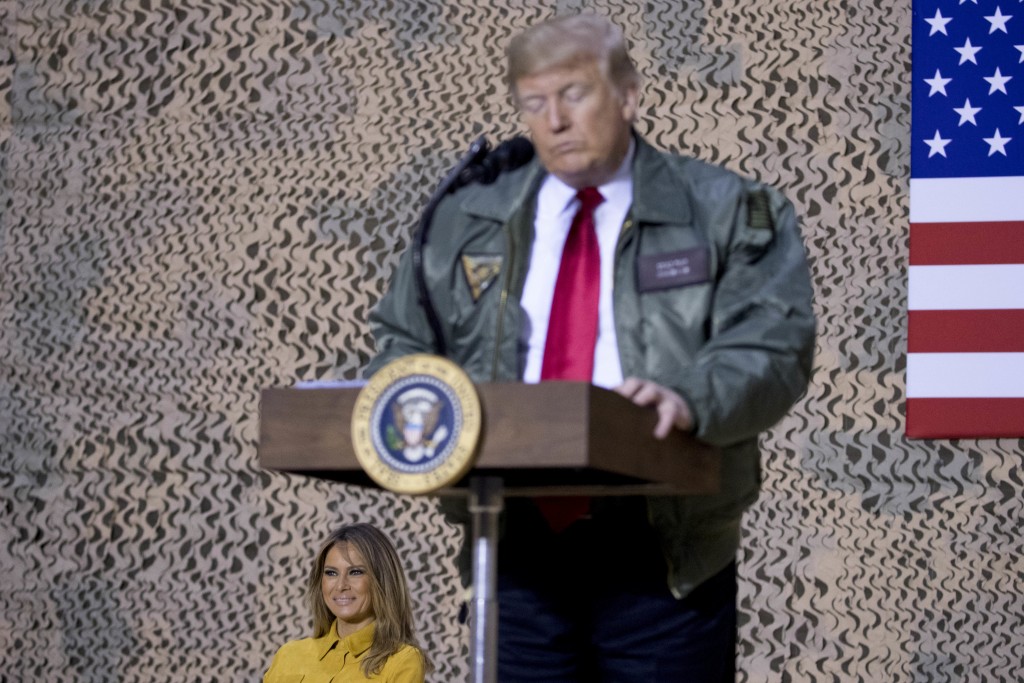 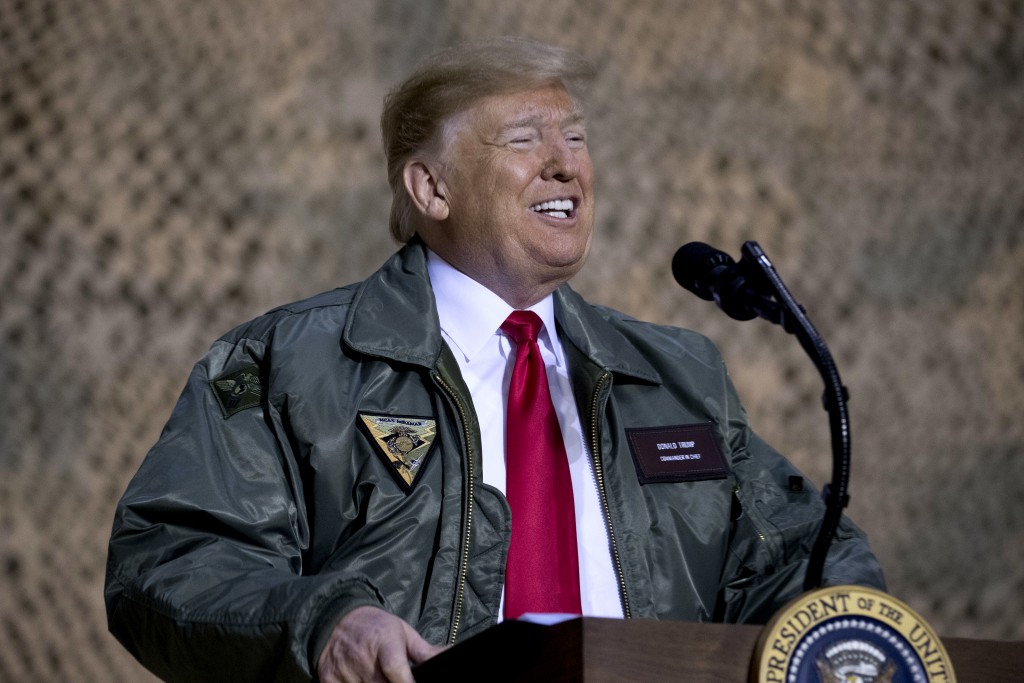 AL-ASAD AIRBASE, Iraq (AP) — President Donald Trump once opined that it wasn't "overly necessary" for him to visit troops in danger zones abroad. But with the lights of Air Force One out and window shutters drawn, the president did just that, slipping into Iraq at night to greet U.S. service members and show that his norm-busting presidency would hew at least to this tradition.

Addressing troops at an air base in western Iraq Wednesday, Trump defended his decision to pull forces from neighboring Syria, declaring of Islamic State militants: "We've knocked them out. We've knocked them silly."

His appraisal is at odds with that of military officials, aides and allies who consider IS a diminished but deadly force. His defense secretary and envoy to the anti-IS coalition quit after Trump blindsided much of the national security establishment with his call.

Trump had faced criticism for not yet visiting U.S. troops stationed in harm's way as he comes up on his two-year mark in office. George W. Bush made four trips to Iraq and two to Afghanistan as president; President Barack Obama made four to Afghanistan and one to Iraq.

Such trips are typically unannounced and the subject of extreme security. Trump's was no exception as he flew overnight from Washington, spent three-plus hours on the ground and stopped at Ramstein Air Force Base in Germany for refueling and to greet service members in a hangar there before leaving.

Trump told his audience in Iraq that the decision to withdraw the roughly 2,000 troops from Syria illustrated his quest to put "America first."

"We're no longer the suckers, folks," Trump said at al-Asad Air Base, about 100 miles or 60 kilometers west of Baghdad. "We're respected again as a nation."

He did not meet Iraqi officials while there but spoke on the phone with Iraqi Prime Minister Adel Abdul-Mahdi. The visit appeared to inflame sensitivities about the continued presence of U.S. forces in Iraq as the two major blocs in the Iraqi parliament condemned the trip, likening it to a violation of Iraqi sovereignty.

The air base where Trump spoke is about 155 miles (250 km) from Hajin, a Syrian town near the Iraqi border where Kurdish fighters are still battling IS extremists. Trump has said IS militants have been eradicated, but the latest estimate is that IS still holds about 60 square miles (100 square km) of territory in that region of Syria, although fighters also fled the area and are in hiding in other pockets of the country.

Defense Secretary Jim Mattis was supposed to continue leading the Pentagon until late February, but Trump moved up his exit and announced that Patrick Shanahan, deputy defense secretary, would take the job on Jan. 1. Trump said he was in "no rush" to nominate a new defense chief.

"Everybody and his uncle wants that position," Trump told reporters traveling with him. "And also, by the way, everybody and her aunt, just so I won't be criticized."

Critics said the U.S. exit from Syria, the latest in Trump's increasingly isolationist-style foreign policy, would provide an opening for IS to regroup, give Iran a green light to expand its influence in the region and leave U.S.-backed Kurdish forces vulnerable to attacks from Turkey.

"I made it clear from the beginning that our mission in Syria was to strip ISIS of its military strongholds," said Trump, who wore an olive green bomber-style jacket as chants of "USA! USA!" greeted him and speakers blared Lee Greenwood's song "God Bless the USA."

Trump also said he had no plans to withdraw the 5,200 U.S. forces in Iraq. That's down from about 170,000 in 2007 at the height of the surge of U.S. forces to combat sectarian violence unleashed by the U.S.-led invasion to topple dictator Saddam Hussein.

Abdul-Mahdi's office said "differences in points of view over the arrangements" prevented the two from meeting but they discussed security issues and Trump's order to withdraw U.S. troops from Syria over the phone. Abdul-Mahdi's office also did not say whether he had accepted an invitation to the White House. But Trump press secretary Sarah Huckabee Sanders told reporters on the flight back that the Iraqi leader had agreed to come.

Trump said that after U.S. troops in Syria return home, Iraq could still be used to stage attacks on IS militants.

"We can use this as a base if we wanted to do something in Syria," he said. "If we see something happening with ISIS that we don't like, we can hit them so fast and so hard" that they "really won't know what the hell happened."

He promised a "strong, deliberate and orderly withdrawal" of forces from Syria

Trump had told The Associated Press in October that he would visit U.S. troops in troubled areas "at some point, but I don't think it's overly necessary." He told reporters that he had planned to make the trip three or four weeks ago, but word started getting out and forced him to postpone it.

Iraqi leaders declared an end to combat operations against IS a year ago but the country's political, military and economic situation remains uncertain. It continues to experience sporadic bombings, kidnappings and assassinations, which most people attribute to IS.

On Dec. 15, the U.S.-led coalition launched an airstrike in support of Iraqi troops who were chasing IS fighters toward a tunnel west of Mosul. The strike destroyed the tunnel entrance and killed four IS fighters, according to the U.S. military in Baghdad. The last U.S. service member to die in Iraq was in August, as the result of a helicopter crash in Sinjar.

Trump had planned to spend Christmas at his private club in Florida, but stayed behind in Washington due to the partial government shutdown.

Trump campaigned for office on a platform of ending U.S. involvement in foreign trouble spots, such as Syria, Afghanistan and Iraq. The Pentagon is also said to be developing plans to withdraw up to half of the 14,000 American troops still serving in Afghanistan.

Associated Press writers Deb Riechmann and Lolita C. Baldor in Washington and Philip Issa in Baghdad contributed to this report.