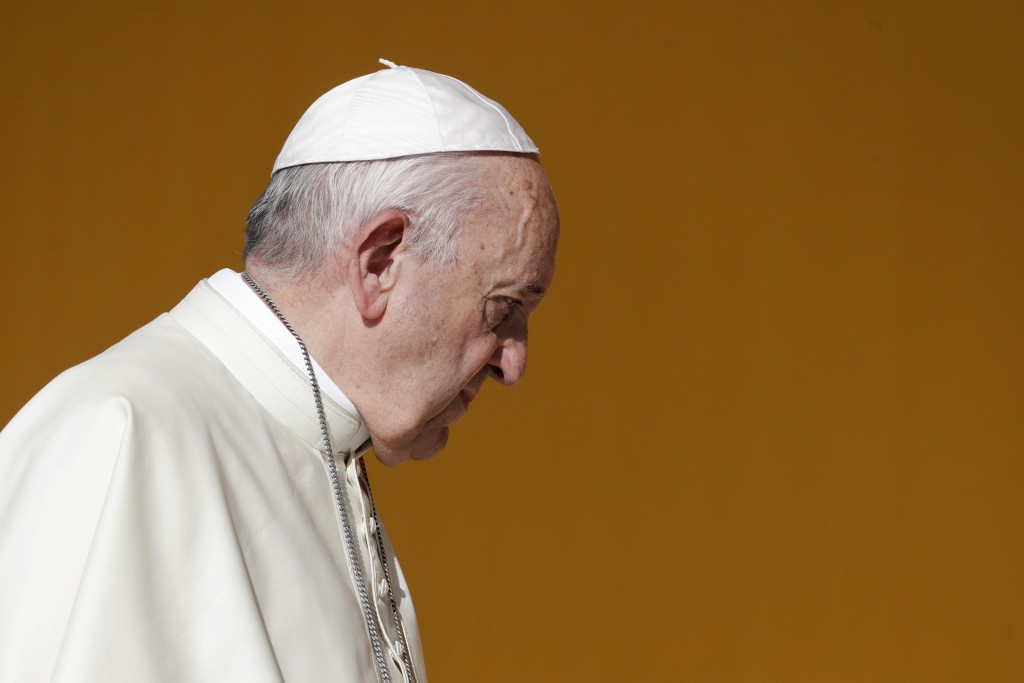 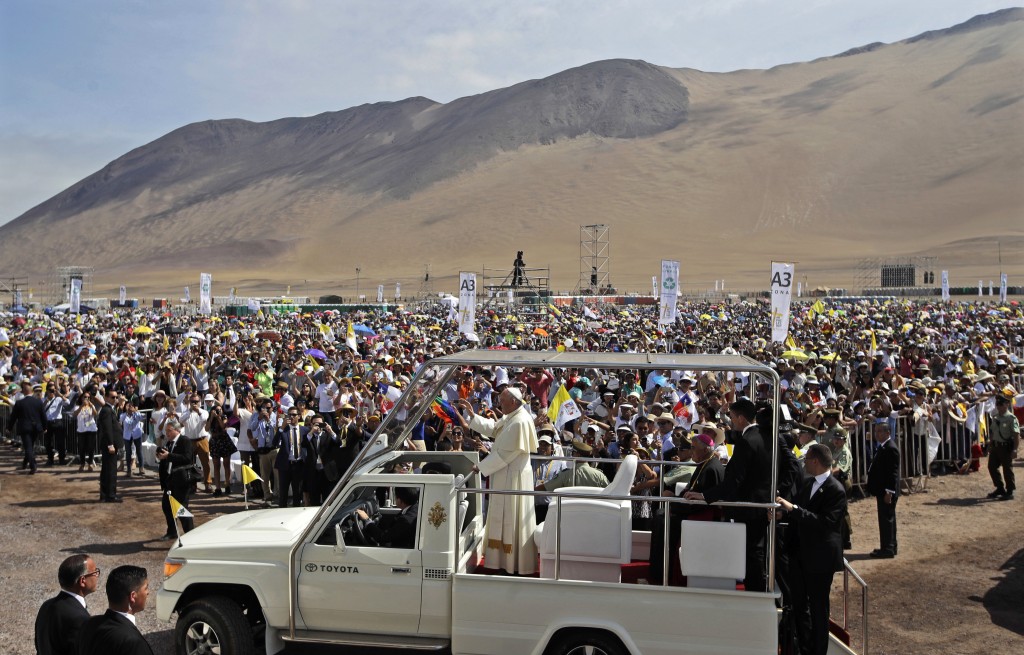 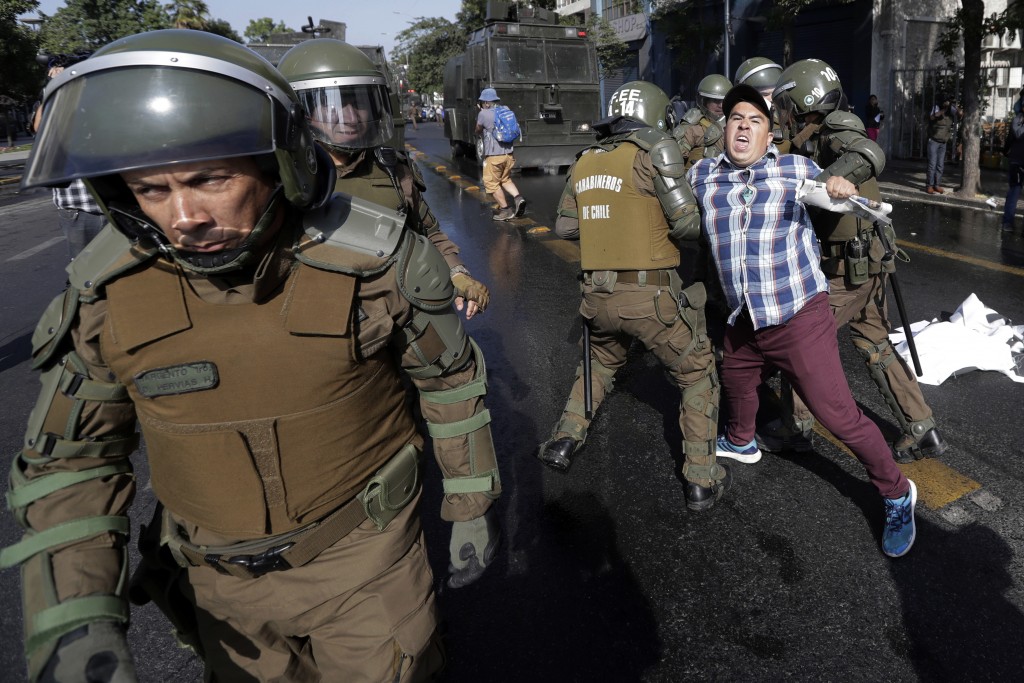 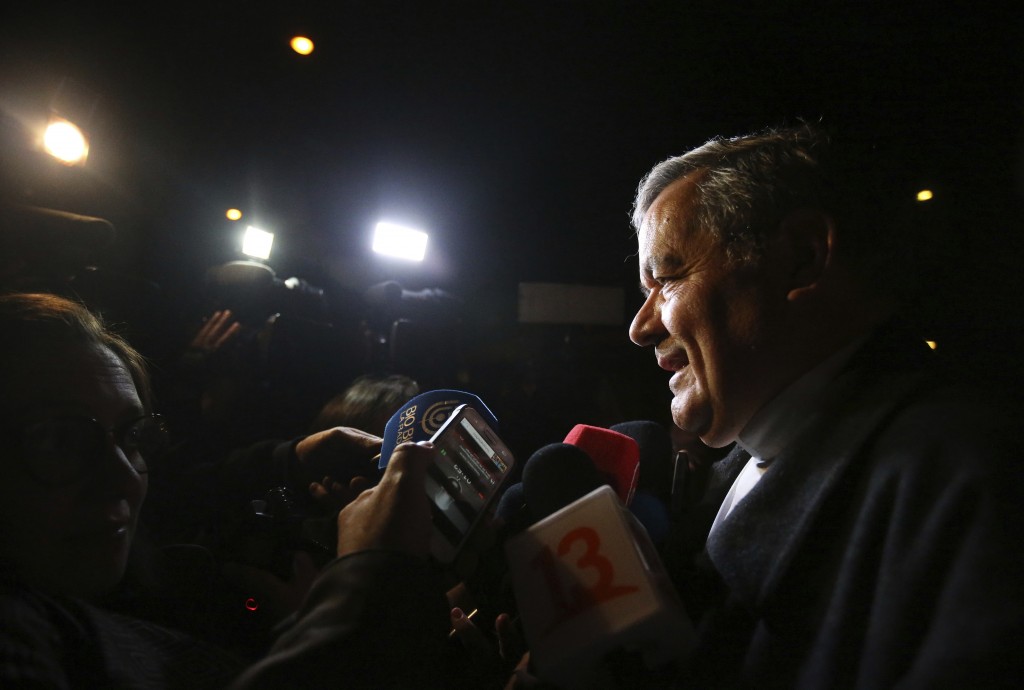 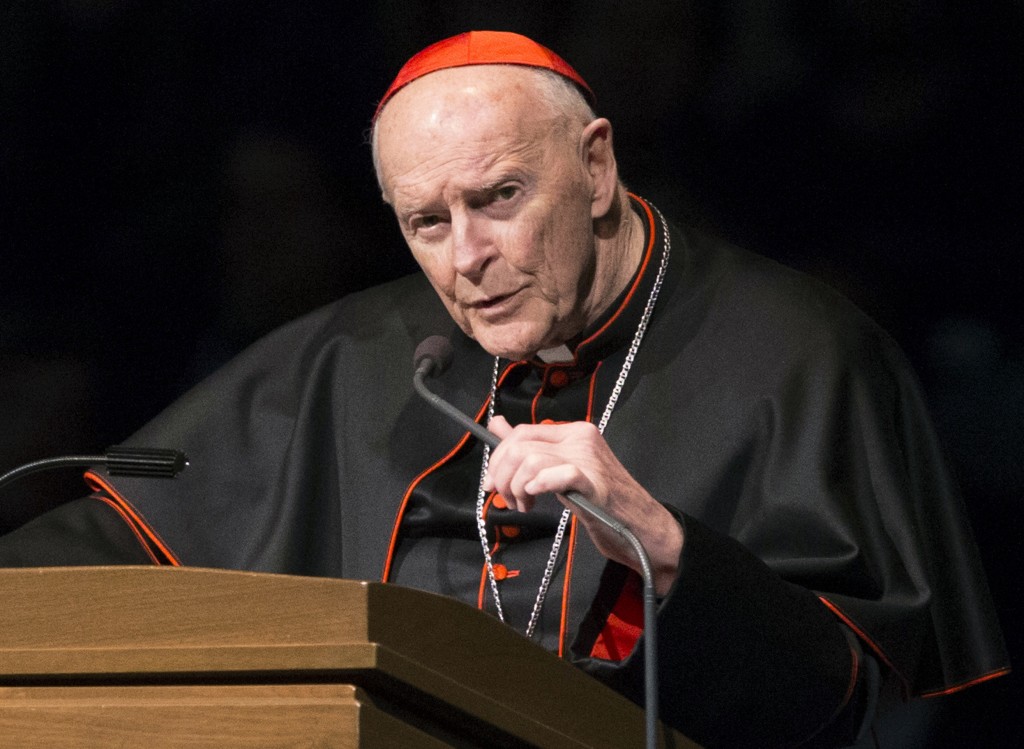 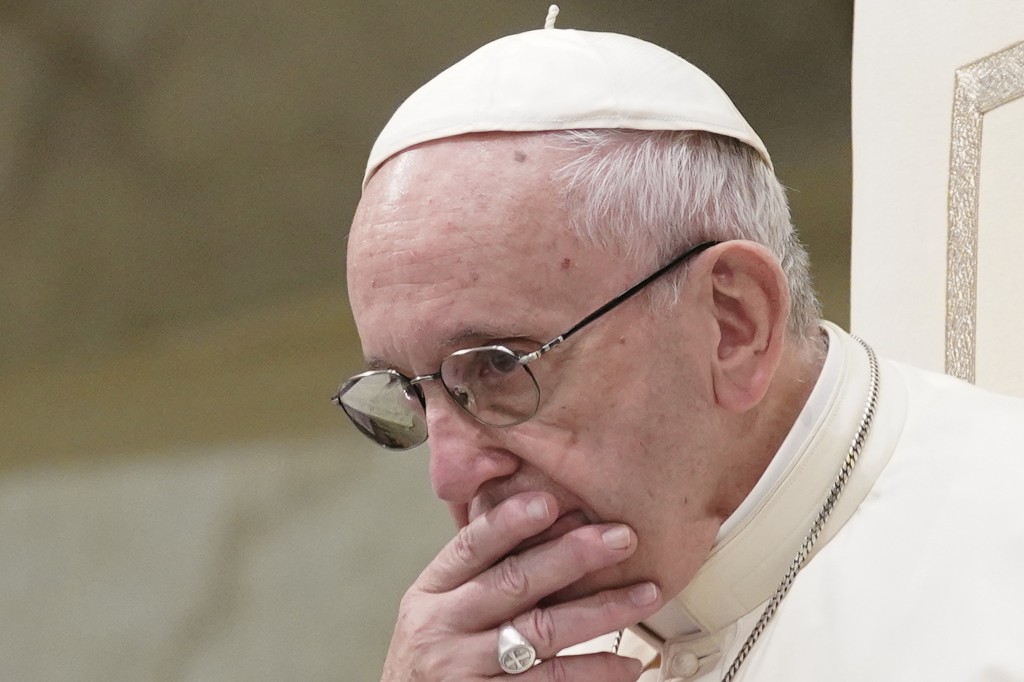 VATICAN CITY (AP) — It has been a wretched year for Pope Francis, whose blind spot on clergy sex abuse conspired with events beyond his control to threaten his legacy and throw the Catholic hierarchy into a credibility crisis not seen in modern times.

The latest development — a high-profile verdict in a far-away country — cements the impression that Francis simply didn't "get it" when he first became pope in 2013 and began leading the church.

Early missteps included associating with compromised cardinals and bishops and downplaying or dismissing rumors of abuse and cover-up. Francis finally came around in 2018, when he publicly admitted he was wrong about a case in Chile, made amends, and laid the groundwork for the future by calling an abuse prevention summit next year.

But damage to his moral authority on the issue has been done. Before his eyes were opened, Francis showed that he was a product of the very clerical culture he so often denounces, ever ready to take the word of the clerical class over victims.

The year started off well enough: Francis dedicated his annual Jan. 1 peace message to the plight of migrants and refugees. Soon thereafter, he baptized 34 cooing babies in the Sistine Chapel and urged their mothers to nurse, a typical Franciscan show of informal practicality amid the splendor of Michelangelo's "Last Judgment."

Francis' January visit was dominated by the clergy abuse scandal there, and featured unprecedented protests against a papal visit: churches were firebombed and riot police used water cannons to quell demonstrations.

Chilean opposition to Francis had actually begun three years prior, when the Argentine-born pope appointed Juan Barros as bishop of the southern diocese of Osorno. Francis had dismissed allegations that Barros ignored and covered up abuse by Chile's most prominent predator priest, imposing him on a diocese that wanted nothing to do with him.

"The day they bring me proof against Bishop Barros, I'll speak," Francis said on his final day in Chile. "There is not one shed of proof against him. It's all slander. Is that clear?"

Francis defended Barros because one of his friends and advisers, Chilean Cardinal Javier Errazuriz, defended Barros. Francis in 2013 had named Errazuriz to his inner circle, a formal parallel cabinet of nine cardinals who meet every three months at the Vatican.

Chilean victims, though, had long charged that Errazuriz had been deaf to their claims while he was archbishop of Santiago, giving cover to abusers and their enablers. Francis disregarded the victims' concerns and appointed Errazuriz to the high-profile cabinet post.

In the wake of his disastrous trip to Chile, Francis slowly came around to the victims' view, in part in response to reporting by The Associated Press. He ordered an in-depth investigation into the Chilean church, admitted to "grave errors in judgment" and personally apologized to the victims he had discredited. He accused the Chilean leadership of creating a "culture of cover-up" and secured the resignations of every active bishop there, Barros included. He vowed that the Catholic Church would "never again" hide abuse, and earlier this month the Vatican announced Francis had fired Errazuriz from the cabinet.

Also removed was Cardinal George Pell, who left his post as the Vatican's economy minister in June 2017 to stand trial for historical sex abuse offenses in his native Australia. Like Errazuriz, Pell had been the target of abuse victims' ire for years, well before Francis brought him to the Vatican, given his prominent role in Australia and the church's horrific record with abuse there.

Both men deny wrongdoing. But their continued presence on the Council of Nine, as the cabinet is called, became a source of scandal for the pope, who bid them farewell in October with a letter thanking them for their service. For Pell, the C9 removal suggests he won't resume work at the Vatican since his five-year term expires early next year.

They are not the only cardinals on the hot seat: The current archbishop of Santiago is under investigation in a broad criminal inquiry into sex abuse cover-up. Prosecutors in a dozen U.S. states are investigating church files. A cover-up trial in France has two cardinals as defendants, including the Spaniard who heads the Vatican office that processes sex abuse cases. The Holy See invoked sovereign immunity to spare Spain's Cardinal Luis Ladaria Ferrer. But it has no such power to protect Cardinal Philippe Barbarin, the archbishop of Lyon, France, who is accused of failing to report a self-confessed abusive priest to authorities. Francis has said French justice should take its course but has praised Barbarin as "brave."

Despite such problems, with the Chile scandal largely atoned for and decisions made to purge his inner circle of compromised members, Francis appeared by summer to be well on his way to steering himself out of the 2018 sex abuse crisis.

In July, Francis removed U.S. Archbishop Theodore McCarrick as a cardinal after church investigators said an allegation that he groped a teenage altar boy in the 1970s was credible. Subsequently, several former seminarians and priests reported that they too had been abused or harassed by McCarrick as adults.

A month later, a grand jury report in Pennsylvania revealed seven decades of abuse and cover-up in six dioceses, with allegations that more than 1,000 children had been molested by about 300 priests. Most of the priests were dead, and the crimes far pre-dated Francis' papacy.

Having removed McCarrick and approved a canonical trial against him, Francis should have emerged as the hero in the saga since he righted the wrong of St. John Paul II, the pope from 1978-2005 who had promoted McCarrick to begin with and whose record on abuse issues is far worse than Francis' given his inaction.

But Francis' get-tough victory lap was cut short when a former Vatican ambassador to the U.S. accused the pope himself of participating in the McCarrick cover-up.

In an 11-page denunciation in August, Archbishop Carlo Maria Vigano claimed that Vatican officials from the top on down over the course of three pontificates had known about McCarrick's penchant for seminarians, and turned a blind eye.

Vigano wrote that he had told Francis in 2013, at the start of his pontificate, that McCarrick had "corrupted a generation" of seminarians and priests and that Pope Benedict XVI had eventually sanctioned him for his sexual misconduct.

Vigano claimed Francis disregarded his 2013 warning and rehabilited McCarrick from those sanctions, making him a key adviser and entrusting him with delicate missions to China and elsewhere.

Francis never responded to Vigano's laundry list of claims. Instead, Francis took to blaming the devil — "the Great Accuser" — for sowing division and discord in the church, an indirect jab at Vigano that only fueled conservative outrage at Francis and demands that he come clean about what he knew about McCarrick and when.

The Vatican didn't help Francis' standing any when, without providing any plausible reason, it blocked U.S. bishops from adopting accountability measures to try to restore trust with their flocks.

It now seems clear that Francis, at least at the start of his pontificate, was willing to overlook past sexual misbehavior or cover-up claims if those responsible had atoned. Francis launched his pontificate with his famous "Who am I to judge" comment, about a gay priest whom he had appointed to a top advisory position despite allegations he had had a string of lovers.

That comment, which won him plaudits from liberal Catholics and landed him on the cover of Advocate magazine, may now be his undoing. If he had judged his advisers more scrupulously at the start of his pontificate on their abuse and cover-up records, he might have retained more credibility in 2018.