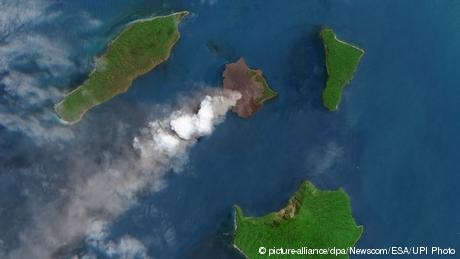 As stormy weather hindered emergency crews, authorities warned that another tsunami could be triggered by fresh volcanic activity.

Residents were advised to stay indoors to avoid "ash and sand" being blown by the wind.

They were advised to wear masks and goggles for protection, and to stay up to a kilometer (less than a mile) from the coast.

Some residents did return to what was left of their homes as heavy rain fell and waves pounded the shore.

The disaster agency raised the death toll to 430, with 1,495 people injured and another 159 missing. Nearly 22,000 people have been evacuated to higher ground.

"There's a chance the number of fatalities will rise," said an agency spokesman.

Saturday's event triggered flashbacks for some who survived a disaster that struck in 2004 off the northwestern tip of Indonesia's Sumatra island.

"When it happens, I always remember what we have been through," said Qurnaty who lost her home and several family members to the 2004 waves.

The country's system of tsunami detection buoys — deployed after the 2004 disaster — has not worked since 2012, with some units being stolen or vandalized.