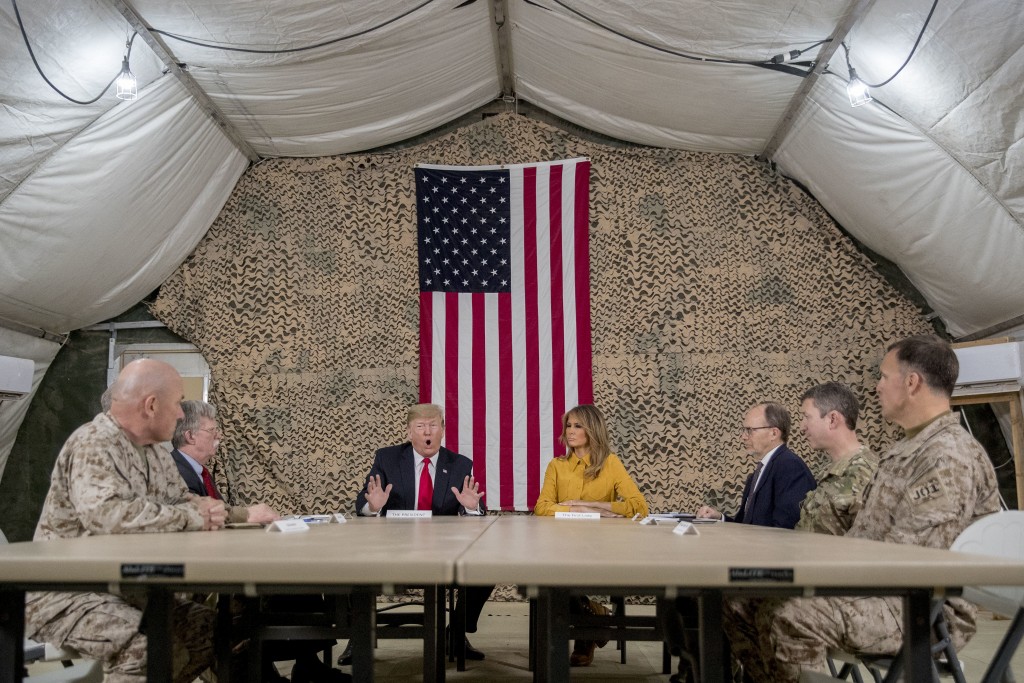 WASHINGTON (AP) — President Donald Trump made an unannounced trip to Iraq on Wednesday to meet U.S. troops. It's the sixth time that a U.S. president has visited Iraq.

A look at previous presidential visits to Iraq:

In November 2003, President George W. Bush became the first U.S. president to visit Iraq. He flew to Baghdad under extraordinary secrecy and security to spend Thanksgiving with U.S. troops and thank them for "defending the American people from danger."

He also met with members of the Coalition Provisional Authority and the Iraqi Governing Council. Bush said that insurgents who were testing America's commitment in Iraq would not be rewarded with a U.S. retreat.

Bush made three more trips to Iraq while in office.

In June 2006, he met with then-Iraqi Prime Minister Nouri al-Maliki and visited with troops. In September 2007, he flew to Al-Asad airbase west of Baghdad, where he met with top U.S. defense officials and Iraqi political leaders. On his last presidential visit in December 2008, Bush had to duck shoes that an Iraqi journalist hurled at him during a news conference in Baghdad.

President Barack Obama visited Iraq in April 2009, the first year of his eight years in office. Obama told U.S. troops and Iraqi officials that it was time to phase out America's combat role in the conflict. He said the U.S. strongly supported steps to unite political factions in Iraq, including integrating minority Sunnis into the government and security forces. Iraqis "need to take responsibility for their own country," Obama told hundreds of cheering soldiers gathered in an ornate, marble palace near Saddam Hussein's former seat of power.