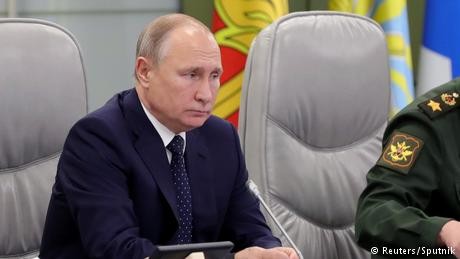 Russian President Vladimir Putin on Wednesday hailed a successful test of a new hypersonic nuclear-capable missile, calling it an "excellent New Year's gift to the nation."

He was speaking in Moscow after watching a live feed of the launch of the Avangard glide vehicle in what was described by the Kremlin as a pre-deployment test of the new missile system.

It said the test involved launching an Avangard missile from the Dombarovskiy missile base in the southern Ural Mountains to hit a practice target on the Kamchatka Peninsula in the far east of Russia, 6,000 kilometers (3,700 miles) away.

"The Avangard is invulnerable to intercept by any existing and prospective missile defense means of the potential adversary," Putin said, adding that it could be deployed from next year with the military's Strategic Missile Forces.

In a bellicose speech in March, Putin presented the Avangard missile as one of an array of new nuclear weapons that Russia needed to counter new threats posed by the development of the US missile defense system.

At the time, the Russian leader said the missile could fly at 20 times the speed of sound, thus making it impossible to intercept by all currently known missile defense systems.

This comes as tensions between Washington and Moscow reach levels not seen since the Cold War.

In addition to quarrels over Russia's role in conflicts in Ukraine and Syria and allegations of Russian intervention in the 2016 US presidential election, the administration of US President Donald Trump has announced its intention to withdraw from the 1987 Intermediate-Range Nuclear Forces (INF) treaty.