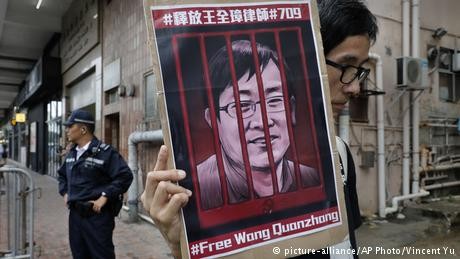 The trial of Chinese human rights lawyer Wang Quanzhang got underway on Wednesday. At least two protesting supporters were taken away from the courthouse steps.

"Release the innocent Wang Quanzhang," read one protestor's sign. "This is fascist rule," exclaimed another, before they were removed.

Wang, 42, is known for defending political activists and the victims of government land seizures. He initially disappeared in a 2015 sweep of prominent lawyers who frequently took on the Communist authorities in what is now known as the "709 crackdown." He was in legal limbo for months before being charged with "subverting state power" in January 2016.

After being charged, Wang was once again in indefinite detention for three years, with his family only being notified of his court date on Monday.

According to French news agency AFP, at least 50 police and security personnel were on hand to keep people, including Wang's wife, Li Wenzu, away from the trial. Indeed, Li was under veritable house arrest on Wednesday morning, with 20 officers surrounding her home. She has campaigned tirelessly for his release, and has not been allowed to see him even once during his detention. Last week, Li and three other women publicly shaved their heads in protest of Wang's treatment.

Amnesty International accused Beijing of deliberately timing the trial during Christmas, because " obviously a big part of the world will be having a holiday and will not be able to respond."