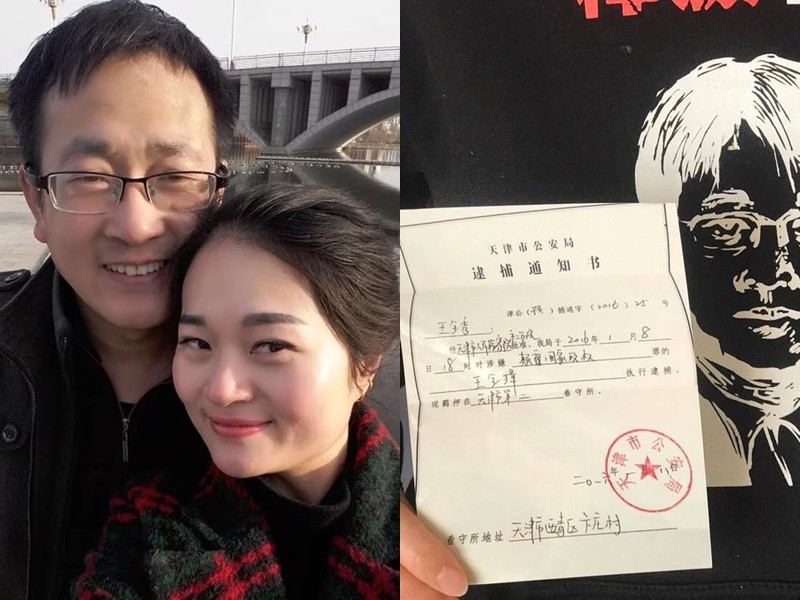 Wang was apprehended in August 2015 along with over 200 other lawyers and has remained in detention for over three years. Today, he was charged by a Tianjin court with state subversion.

CNA reports that his crimes are as follows:

Wang’s wife, Li Wenzu, was preparing to attend the hearing in Tianjin this morning but was prevented from going by Domestic Security Protection personnel waiting outside her home.

Li was approached multiple times by police in various locations over the past few days attempting to discourage her from going to the trial. She was intercepted while taking her children to kindergarten, and plain-clothes officers surrounded her apartment on Dec. 24.

Wang’s sister reportedly arrived at the Tianjin court this morning and discovered many plain-clothes officers guarding the building. Activists and supporters of Wang were carried away from the scene. Several Taiwanese and Hong Kong-based NGOs issued a joint statement on Dec. 25 declaring Wang’s right to a fair trial was never guaranteed, and the state violated his right against secret detention. The groups demanded Wang was released as he was not given access to effective legal defense, CNA reports.

Earlier this month, Li, along with the wives of four other prominent lawyers and activists persecuted in the crackdown, shaved their heads in protest and went to China’s Supreme People’s Court to petition over their treatment. They chanted, “We can go hairless, but you cannot go lawless!” according to Reuters.

Wang was apprehended during the “709 crackdown”, named after the 2015 date it began. The clampdown represented a turning point in how China manages sensitive cases in its domestic legal environment; lawyers, legal assistants and activists were rounded up en masse and charged with state subversion for their work defending human rights.

Some were given lengthy sentences of up to seven years while others were released pending suspended trials but remained under state surveillance. Some of those detained faced various kinds of torture.

South China Morning Post reported Sui Muqing, a lawyer who often worked pro bono with the economically disadvantaged, was subject to sleep deprivation for up to five days at a time in prison, and was finally forced to confess to subversion charges after experiencing excruciating pain all over his body.

Wang’s case has been particularly unique, however, as while others were able to communicate with friends, family or lawyers, he effectively disappeared, his wife told the BBC.

Chinese President Xi Jinping held a Communist Party Central Committee nine months before the crackdown, where he announced the state was to devote itself to improving the country through “rule by law,” or lawyers helping the state implement its demands, rather than “rule of law,” a principle which helps keep the state in check.