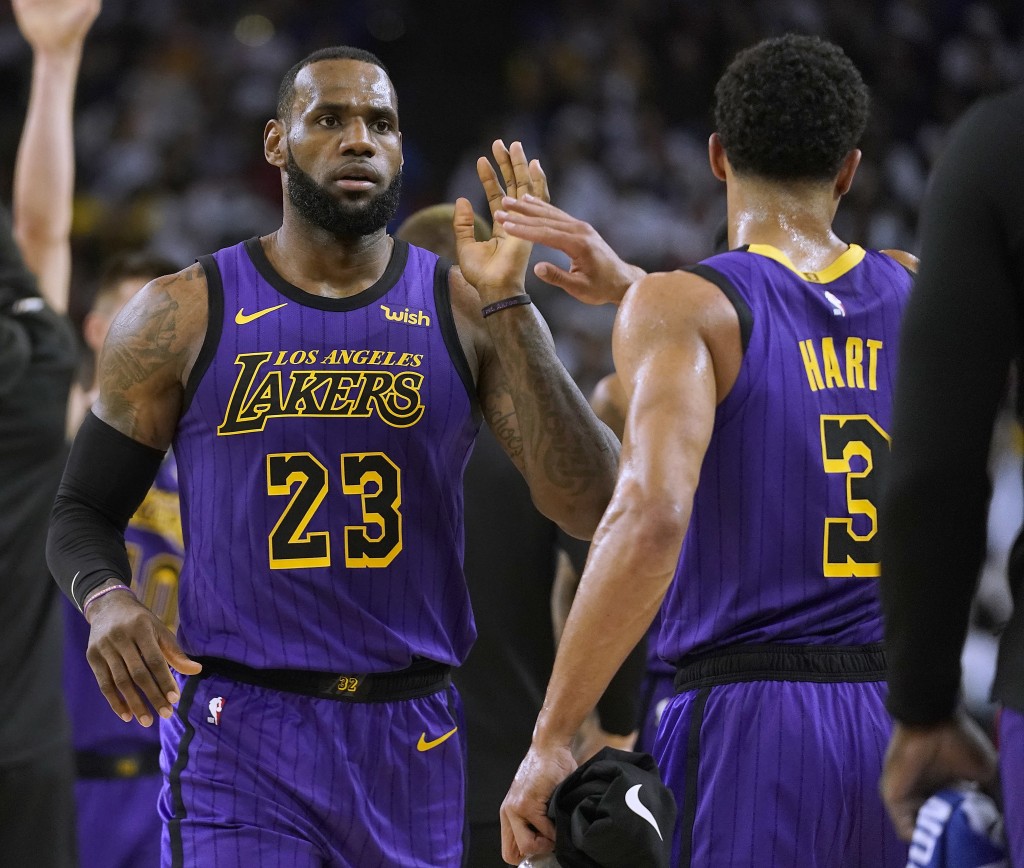 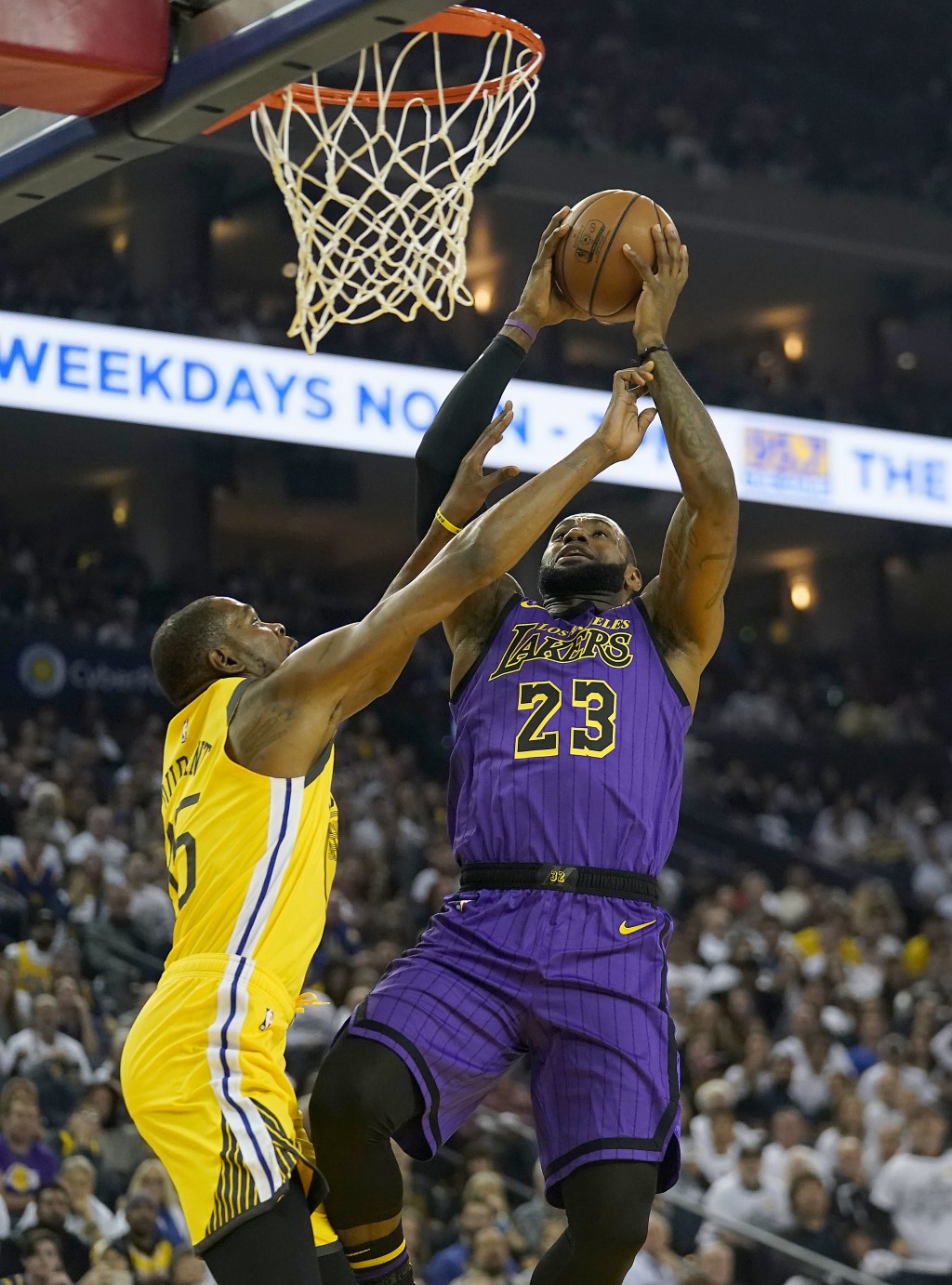 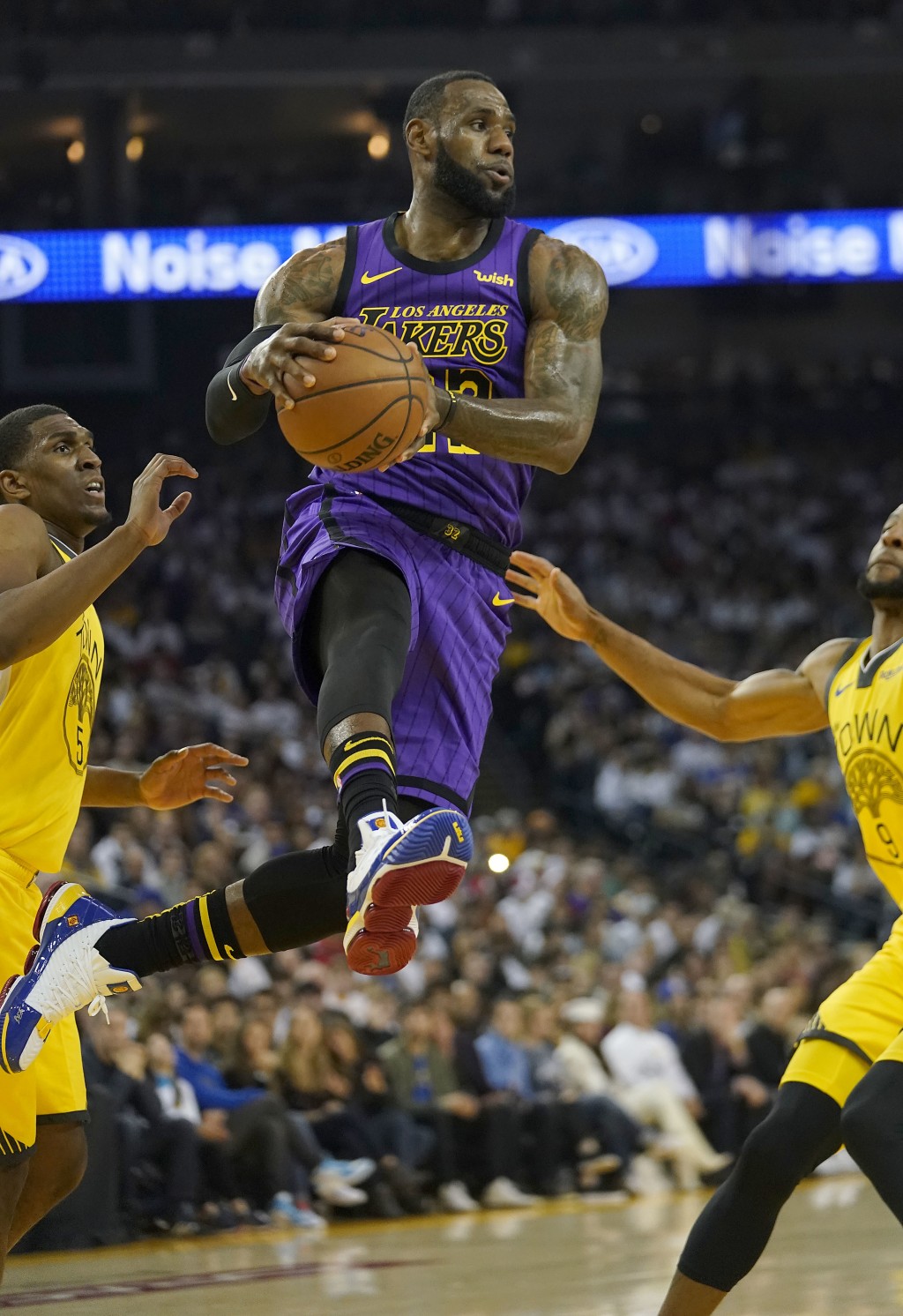 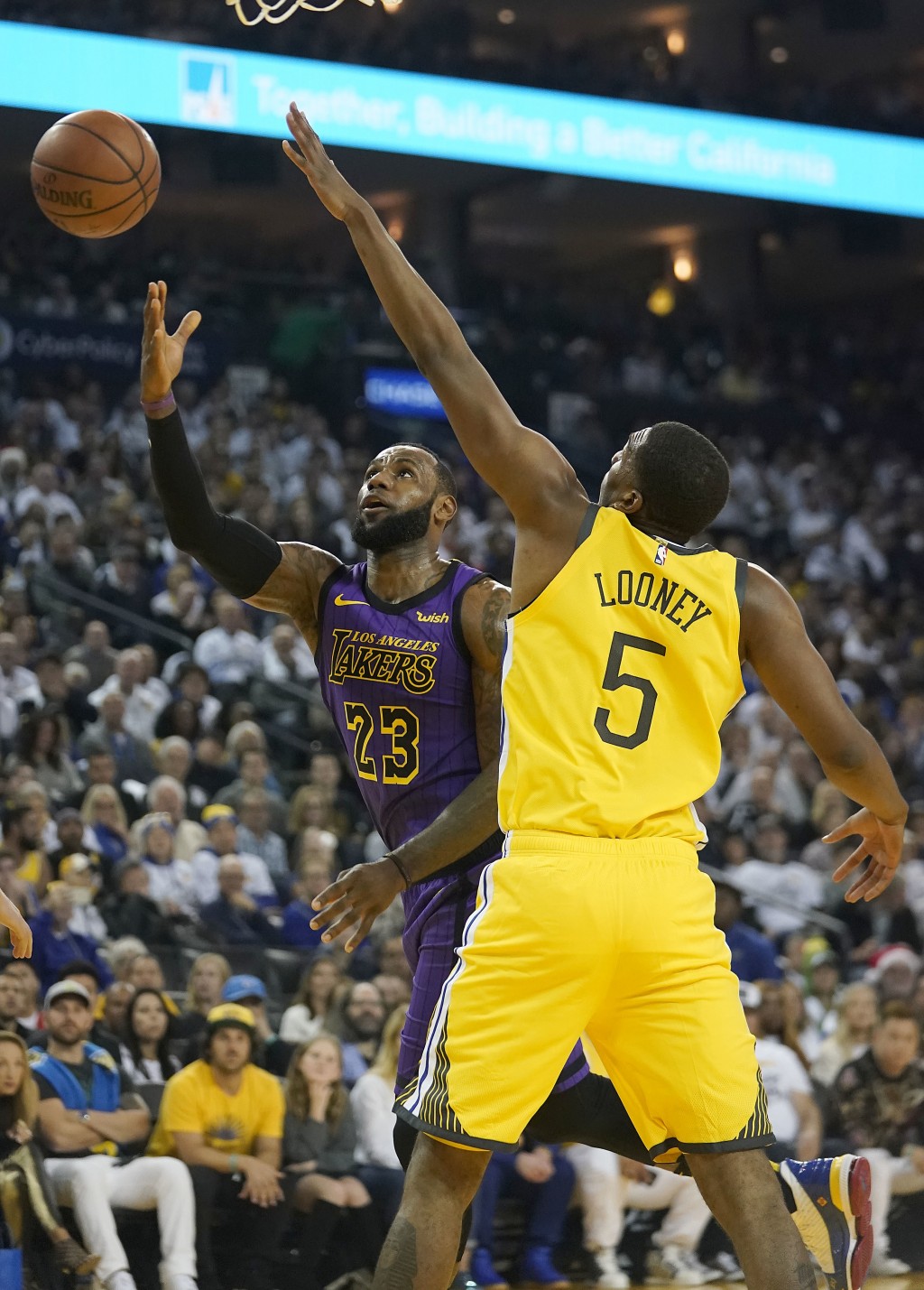 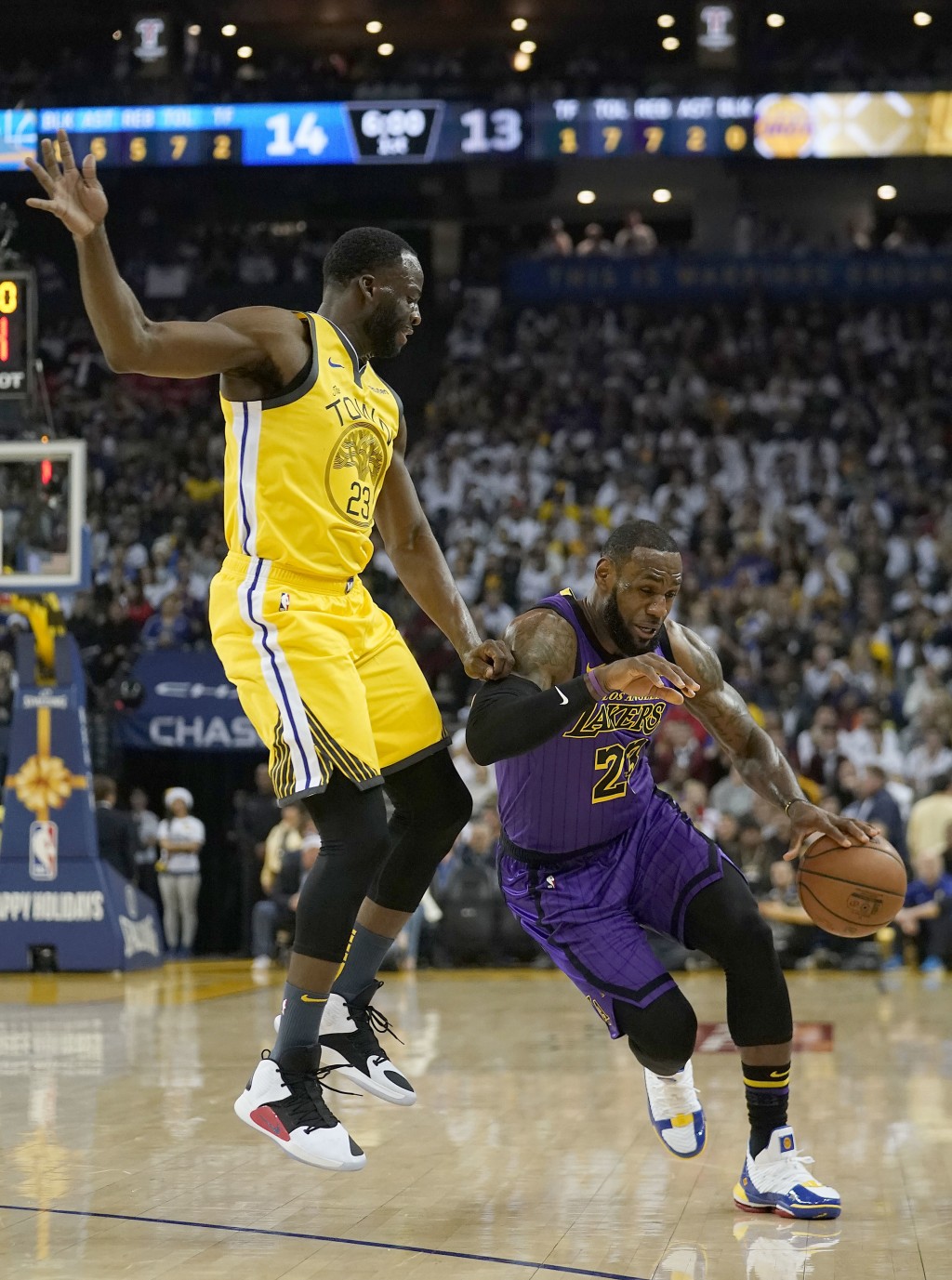 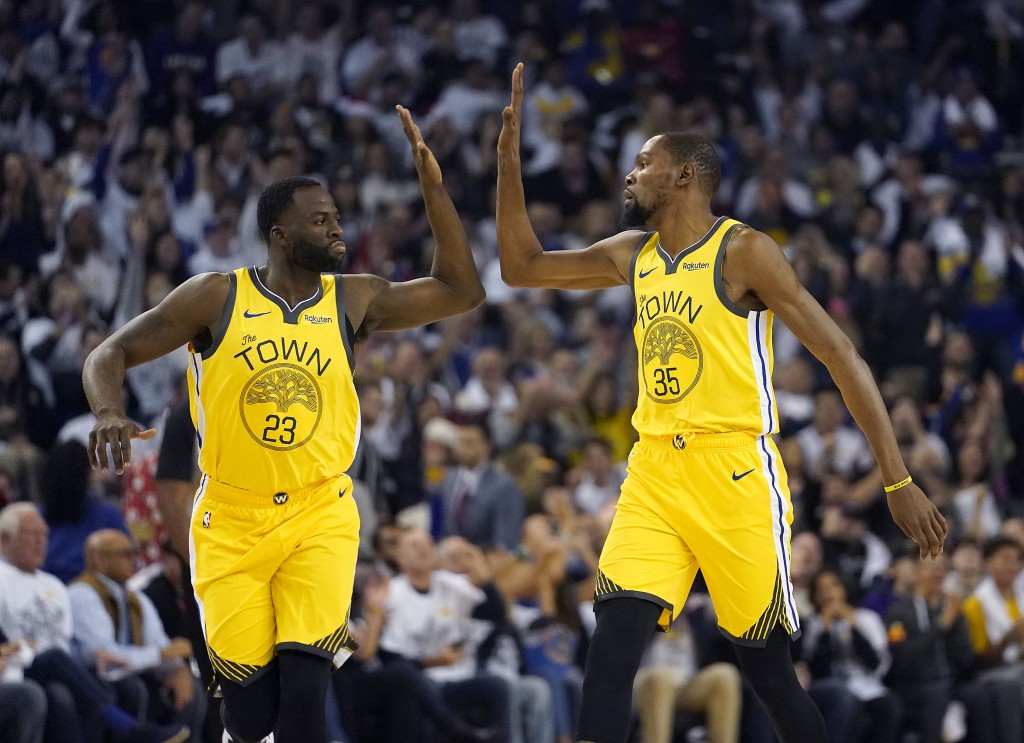 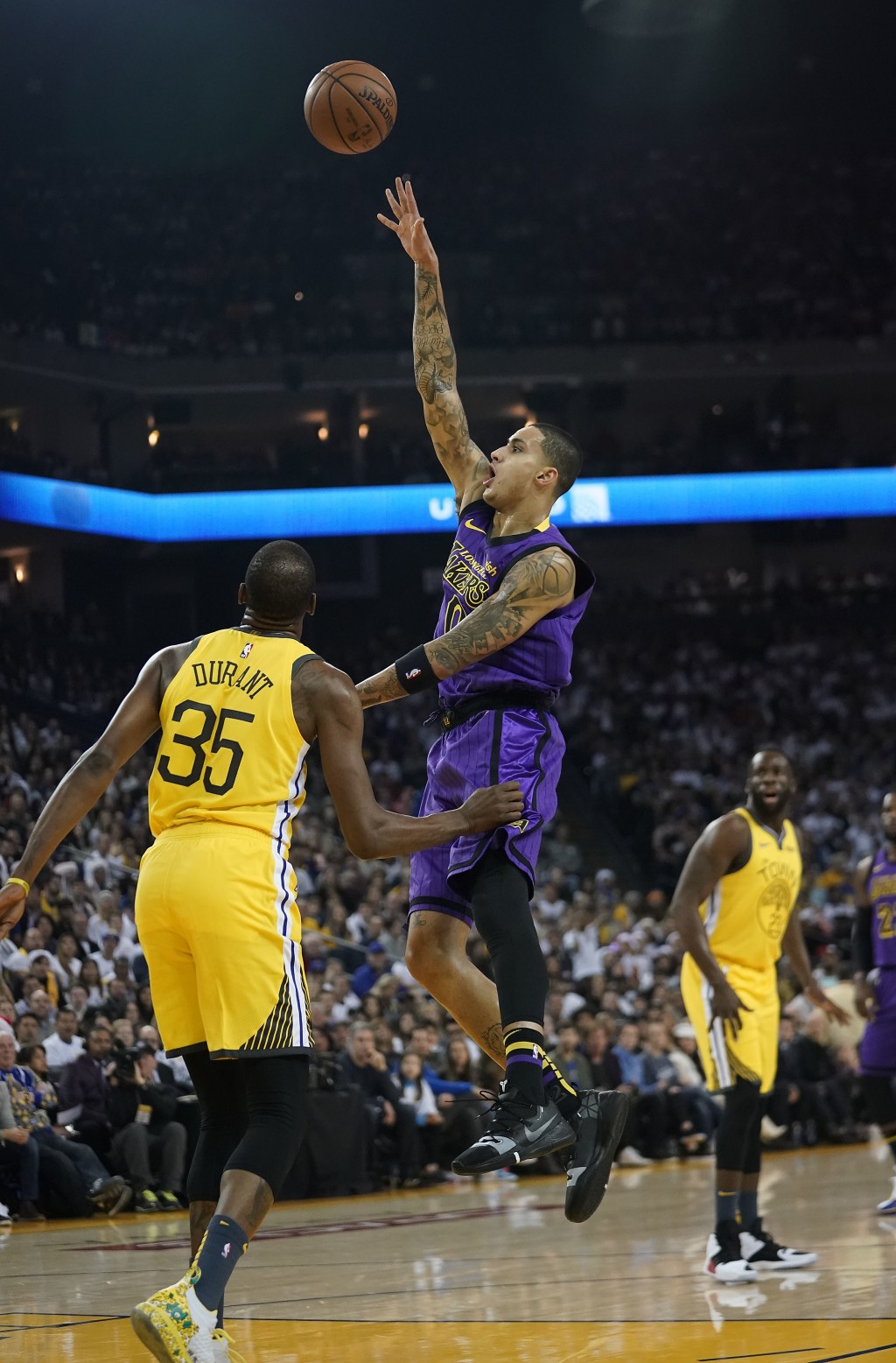 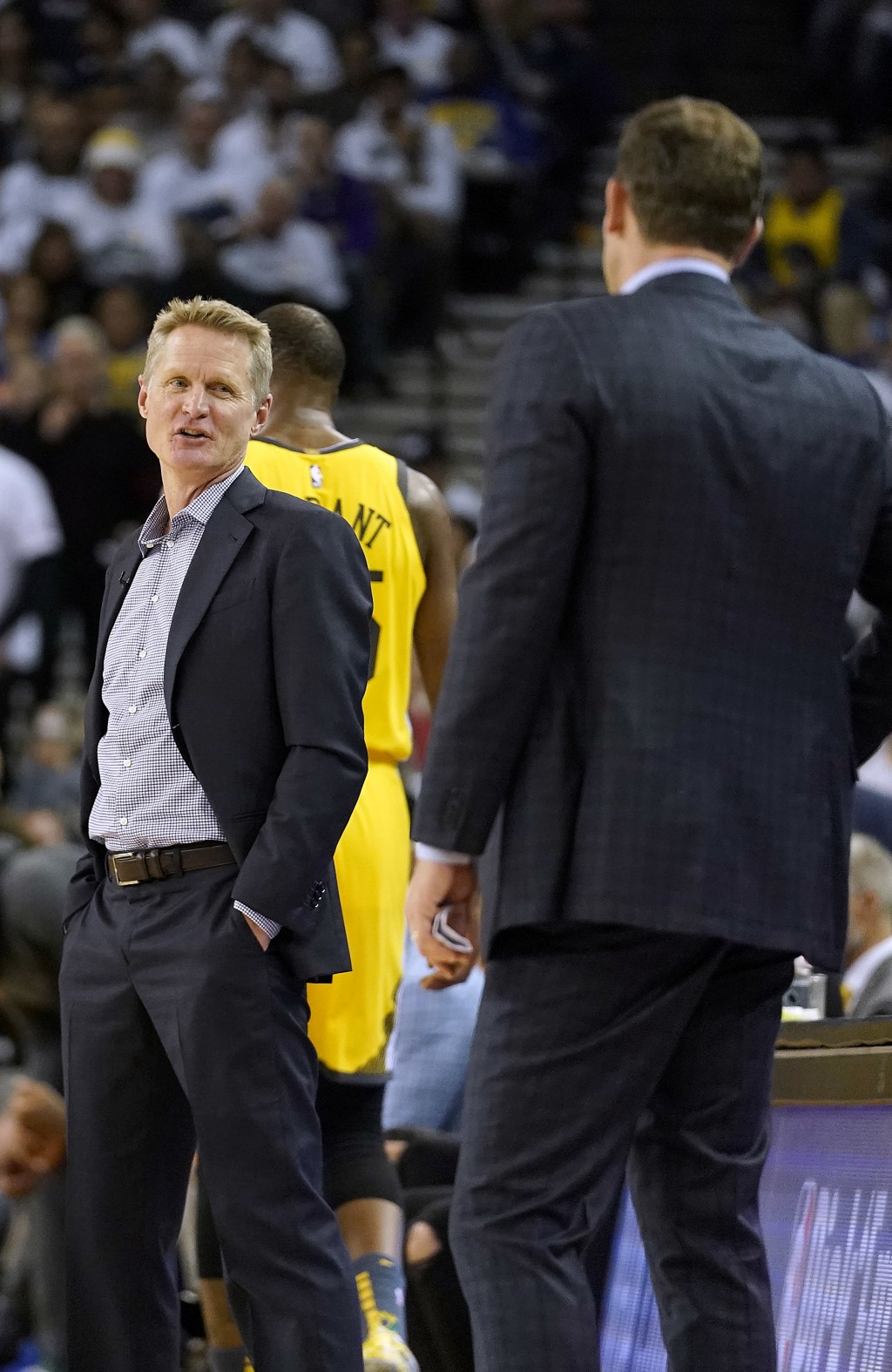 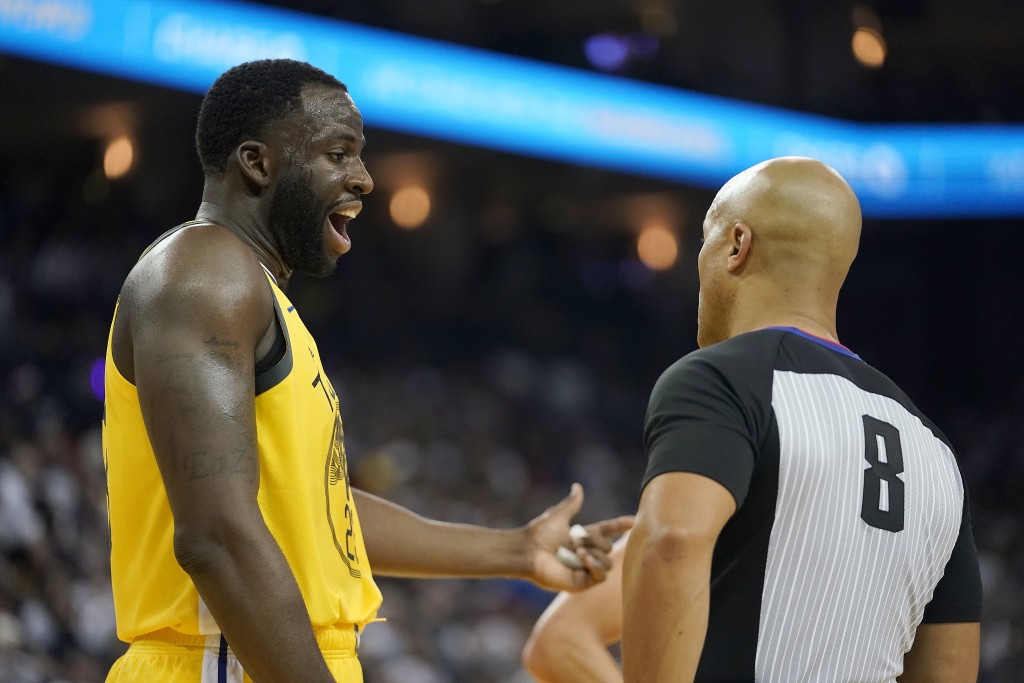 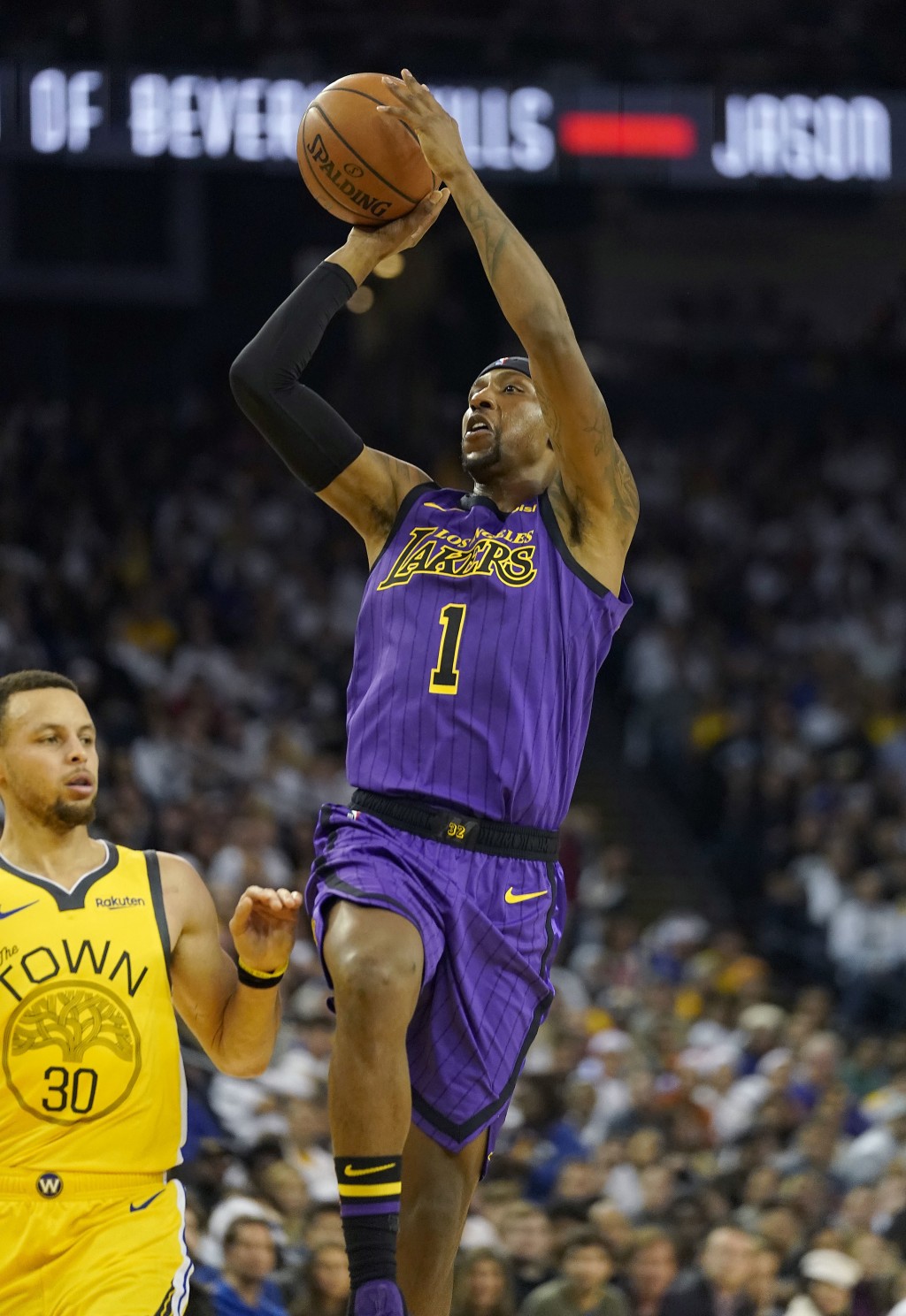 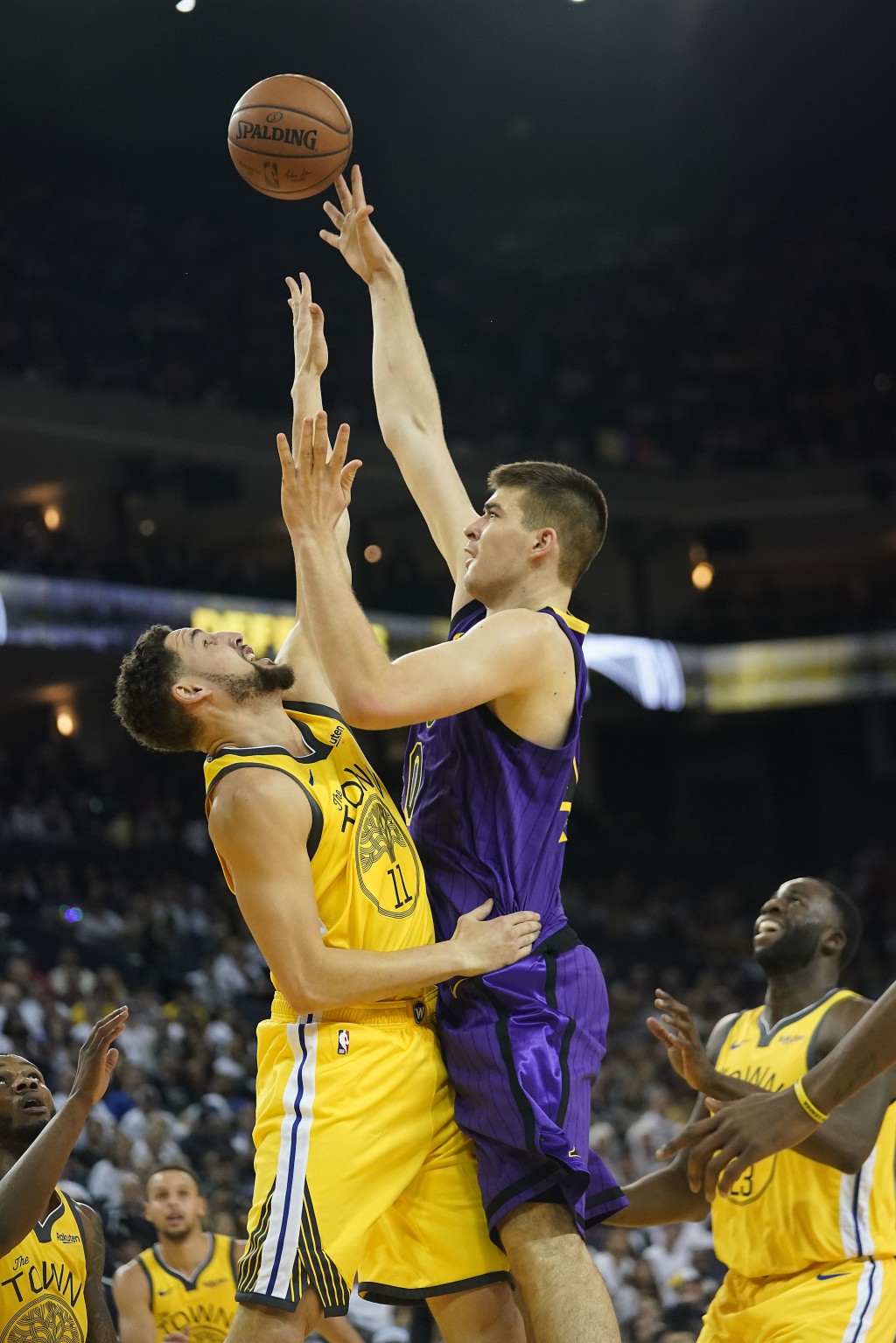 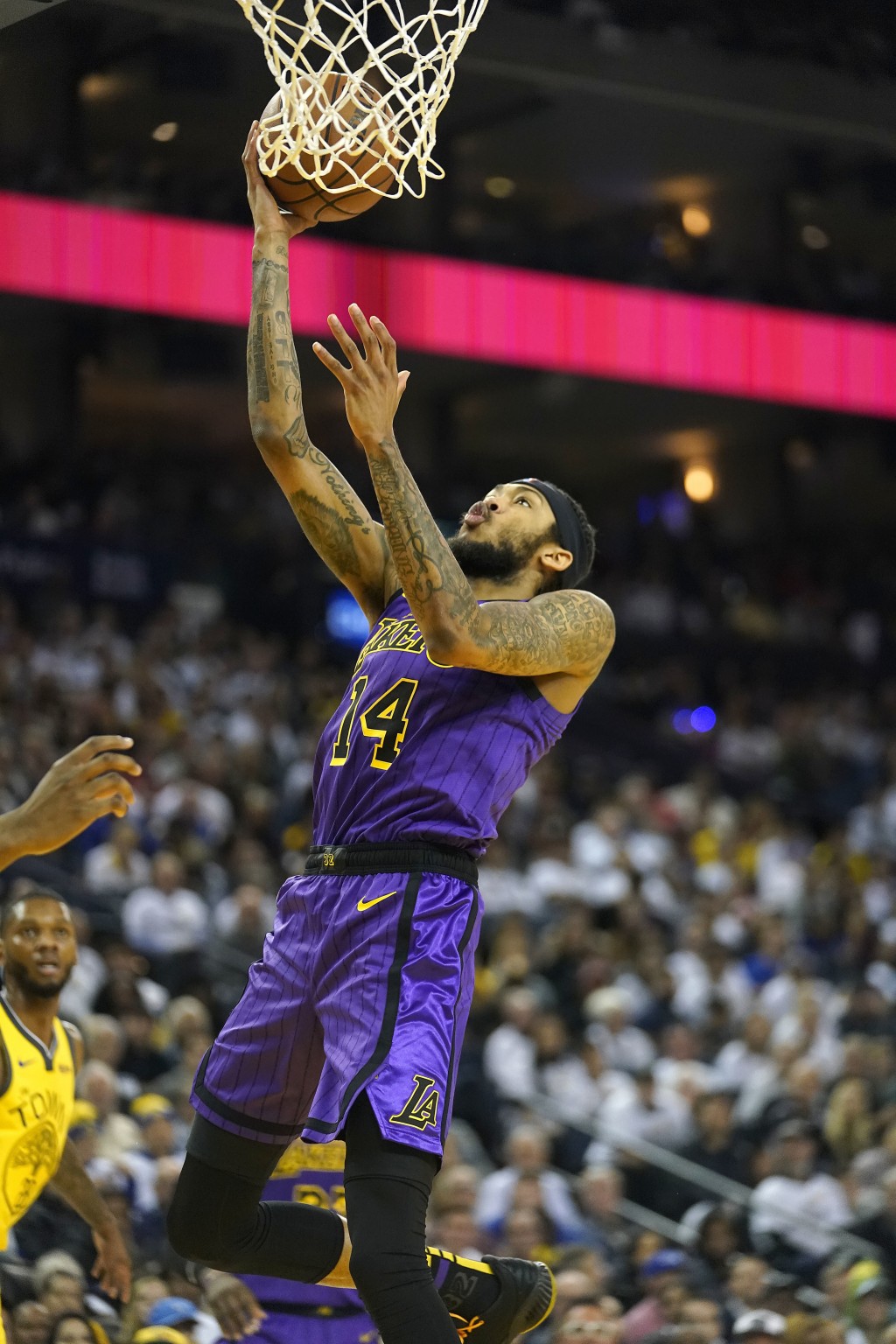 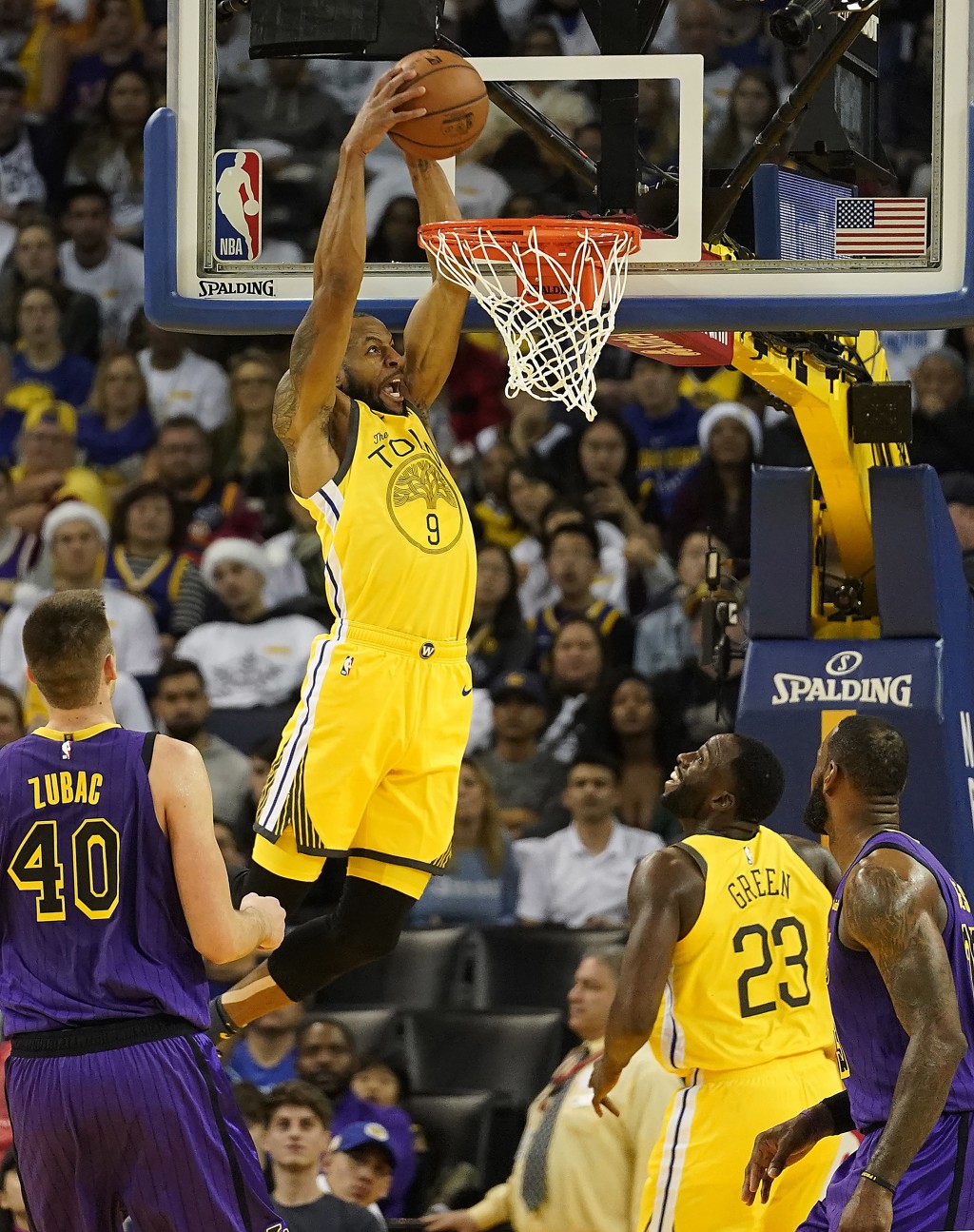 OAKLAND, Calif. (AP) — The Los Angeles Lakers lost LeBron James in the third quarter to a strained left groin then went out and beat the two-time defending champions without him Tuesday night, getting King James' 17 points, 13 rebounds and five assists before the injury in a surprising 127-101 rout of the Golden State Warriors.

James grabbed at his left groin area with 7:51 left in the third after slipping under the Warriors' basket while trying for a loose ball. He tried to stretch it out, awkwardly walked toward the Lakers bench trying to loosen up before leaving on his own though gingerly out the tunnel for the locker room.

Stephen Curry made consecutive 3s shortly after James exited, and the Warriors got within 78-76 at the 2:48 mark of the third — but Kyle Kuzma and the persistent Lakers stayed at it every possession. Curry wound up with 15 points but the home fans had seen enough well before the final buzzer and headed out for the rest of Christmas.

Kuzma contributed 19 points with a pretty baseline 3 late, Ivica Zubac had 18 points and 11 rebounds and Rajon Rondo 15 points and 10 assists off the bench as the Lakers snapped an 11-game losing streak on the Warriors' home floor since a 118-115 overtime win Dec. 22, 2012. Los Angeles also ended a seven-game skid overall in the rivalry with its first win in the series since March 6, 2016.

James made it look easy early on shooting over Jonas Jerebko and Kevon Looney. James hit a turnaround jumper at the 4:39 mark of the second quarter to put the Lakers ahead 52-37 and L.A. led 65-50 at the break.

It was James' second straight Christmas game at Oracle Arena after playing here with the Cavaliers last year and losing 99-92.

Lakers coach Luke Walton — a former Warriors top assistant and dear friend of Steve Kerr — got some time with his Hall of Fame dad, Bill, before the game and a few moments to catch up with Curry and share holiday greetings in the hallway after the two-time MVP's warmup routine.

Kevin Durant, playing on a tender left ankle, had 21 points, seven rebounds and seven assists. Andre Iguodala came off the bench and made his initial five shots and 7 of 9 by halftime on the way to a season-high 23 points while also handling some of the load defending James.

Lakers center JaVale McGee was still sick with a respiratory infection and missed his fifth straight game, didn't travel and missed his scheduled moment to receive his championship ring. That will now happen Feb. 2 when the Lakers return to Oracle Arena.

McGee was one of three big men who rotated in Steve Kerr's rotation on the way to a repeat title.

"I'm happy for JaVale. He's getting more of a chance to play with the Lakers than he did with us," Kerr said. "We had a lot of centers play a really important role for us the last couple of years. He was fantastic and we loved having him here. Wish he was here and that we could give him his ring today, but we'll do it next time. Very happy for him and his success this year."

Lakers: Zubac shot 9 for 10. ... The Lakers had lost three of four, so this meant a lot. ... Los Angeles improved to 5-6 on the road vs. the Western Conference. ... Tyson Chandler, who had been questionable with back spasms after he missed Sunday's game against Memphis, returned and played 16 minutes.

Warriors: Iguodala reached double figures for the fourth time this season. ... Curry and Draymond Green each picked up two early fouls, and Green fouled out with 5:36 left. He was limited to four points, five assists and five rebounds. ... Golden State is 12-16 on Christmas and 6-5 at home.

Lakers: At Sacramento on Thursday.