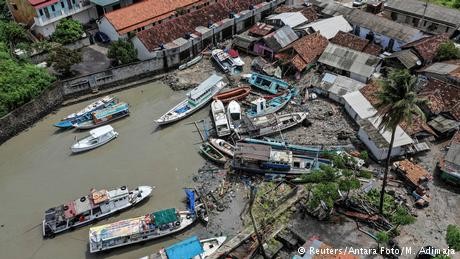 Indonesian rescuers on Tuesday used drones, sniffer dogs and heavy machinery to search for survivors along the west coast of Java that was hit by a powerful tsunami last week.

Rescuers worked round the clock to detect and dig bodies out of mud and wreckage along debris-strewn beaches on the coast that bore the brunt of the huge waves that came smashing without any warning after a crater collapsed on the volcanic island of Anak Krakatau — the Child of Krakatau.

"There are several locations that we previously thought were not affected," said Yusuf Latif, spokesman for the national search and rescue agency.

"But now we are reaching more remote areas...and in fact there are many victims there," he added.

Rescue efforts were hampered by heavy rainfall and low visibility.

Thousands of people have taken temporary refuge in shelters like mosques or schools.

Authorities warned residents to stay away from the shoreline by as much as a kilometer due to the risk of high waves and extreme weather on Wednesday.

Anak Krakatau, which formed in the early part of the 20th century near the site of the disastrous 1883 eruption of Krakatoa, is still erupting and authorities have imposed a 2 kilometer exclusion zone around it.

BMKG said an area of about 64 hectares (222 acres), or about 90 soccer pitches, of the volcanic island had collapsed into the sea.

Meanwhile, Christmas celebrations were replaced by somber prayers, as church leaders called on Christians across Indonesia, the world's most populous Muslim nation, to pray for the victims.

Pastor Markus Taekz said Tuesday that his Rahmat Pentecostal Church in the hard-hit area of Carita did not celebrate Christmas with joyous songs this year.

"This is an unusual situation because we have a very bad disaster that killed hundreds of our sisters and brothers in Banten," Taekz said, referring to the province on Java island. "So our celebration is full of grief."

Indonesia, a vast archipelago that sits on the Pacific "Ring of Fire," has suffered its worst annual death toll from natural disasters in more than a decade.

Earthquakes struck the island of Lombok in July and August, killing hundreds of people.

In September, a double quake-and-tsunami claimed more than 2,000 lives on the Sulawesi island.