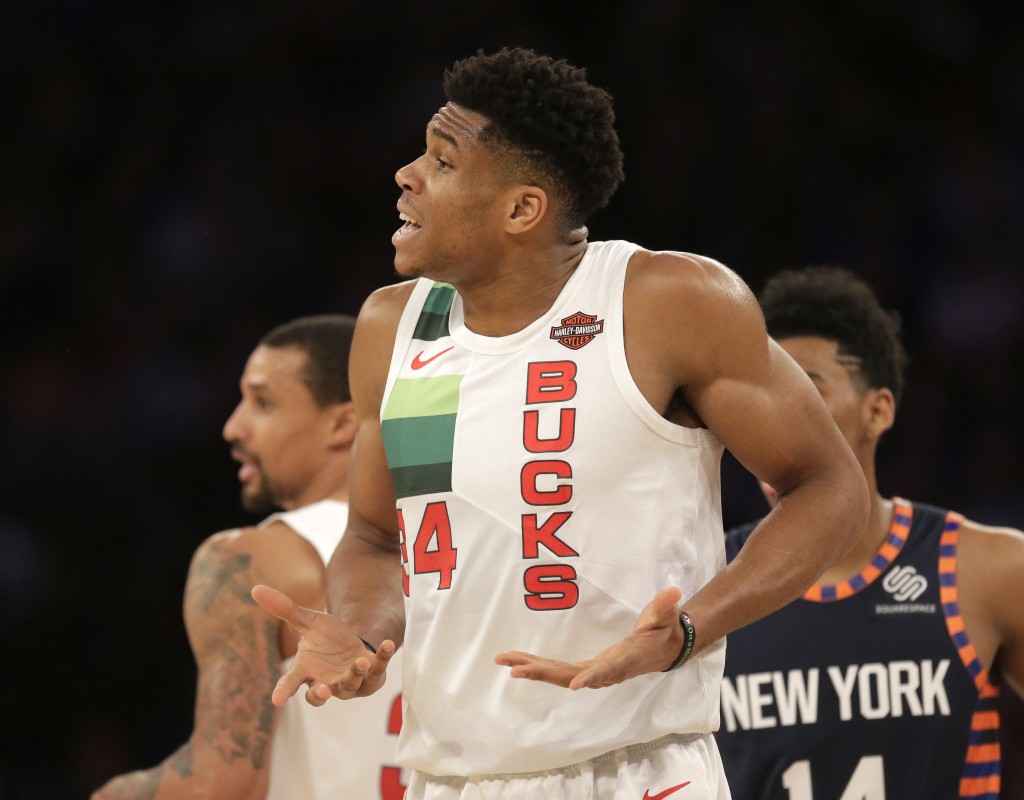 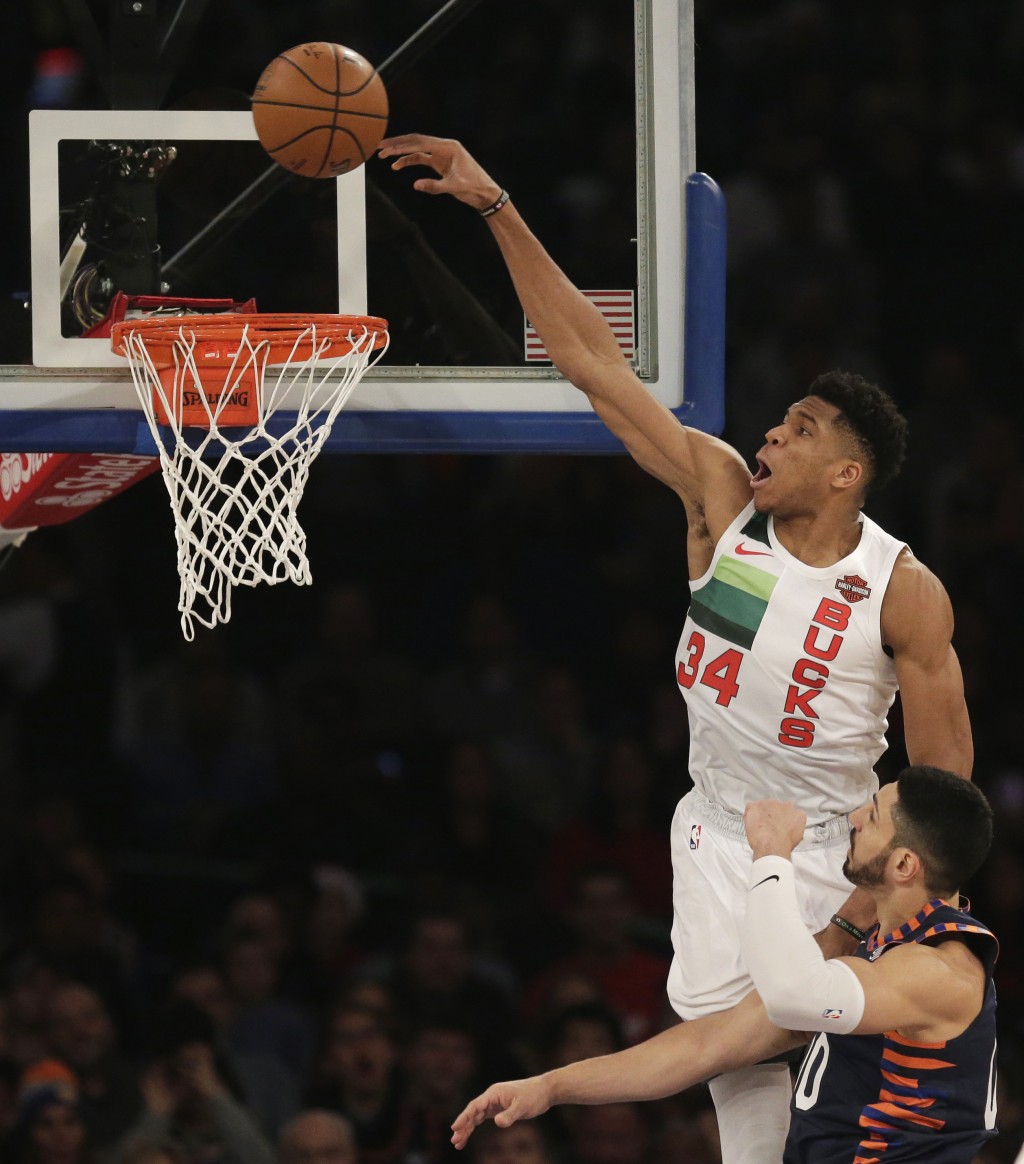 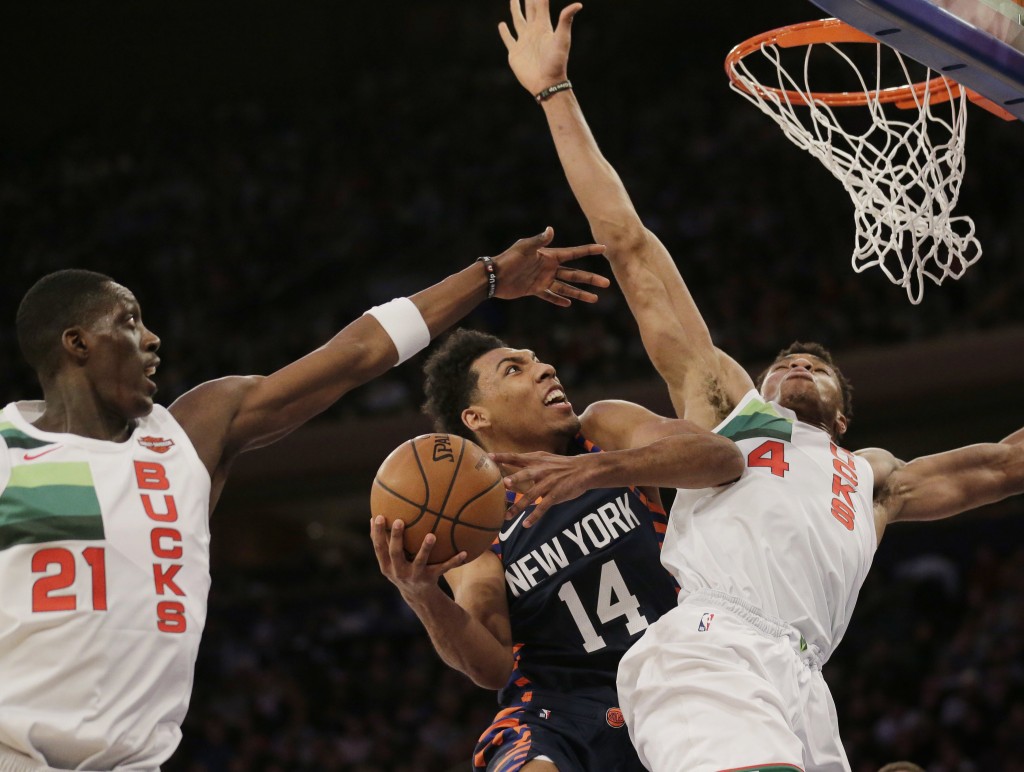 NEW YORK (AP) — Giannis Antetokounmpo had 30 points and 14 rebounds in his Christmas debut, and the Milwaukee Bucks celebrated their return to the holiday schedule by beating the New York Knicks 109-95 on Tuesday.

Brook Lopez scored 20 points for the Bucks, who played on Christmas for the first time since 1977. They were selected for the showcase slate of games largely because of Antetokounmpo but the timing also was perfect to show an emerging team, which improved the NBA's second-best record to 23-10.

Malcolm Brogdon finished with 17 points for the Bucks, who bounced back from a loss to Miami on Saturday to win for the fifth time in six games.

Rookie Kevin Knox scored 21 points for the Knicks, who have lost six straight Christmas Day games and fell to 22-31 in their NBA-record 53 appearances on the holiday.

Antetokounmpo was angry that night with Knicks forward Mario Hezonja, who had dunked over him in the first quarter, then stared and stepped over him. Antetokounmpo felt it was disrespectful, vowing to punch Hezonja in the groin next time.

The Greek Freak was perhaps a little too pumped for the rematch, missing a dunk so badly on his first shot that the rebound bounced all the way out to the opposite corner, where Brogdon grabbed it and fired in a 3-pointer.

But he quickly got untracked, while the Knicks had a hard time getting started in just their third nationally televised game of the season. They started 1 for 8 and fell behind 10-2, though they settled down to lead 24-22 after one quarter.

It was only a seven-point game midway through the third quarter when Antetokounmpo began to seize control. His jumper followed by layup pushed the lead into double digits, and his 11 points in the period helped the Bucks open an 84-65 cushion.

The Bucks were held to a season-low 87 points Saturday in Miami, but the NBA leaders with 116.9 points coming into the game surpassed that early in the fourth quarter against the Knicks.

Bucks: Antetokounmpo was chosen Eastern Conference player of the week on Monday, the third time this season he's won the award. He was also voted the player of the month in the conference for October-November. ... The Bucks are 3-2 on Christmas.

Knicks: Rookie G Allonzo Trier had eight points in 18 minutes after missing seven games with a strained left hamstring. ... Hezonja didn't play. ... The Knicks haven't won on Christmas since beating Boston in 2011 in what was the NBA season opener following the lockout.

Both coaches were asked before the game about the idea that a Christmas Day game favored the visiting team, which could treat it as a regular road game while the hosts were at home, perhaps surrounded by family celebrating the holiday.

Milwaukee's Mike Budenholzer dismissed the notion, saying the Bucks brought plenty of family members and had a big team dinner on Christmas Eve so they could mix basketball and the holiday.

"Well, I look at this team, Milwaukee's coming in with an advantage anyway," he said with a laugh. "They're a better team than us right now."

The teams complete their season series Thursday night at Milwaukee.