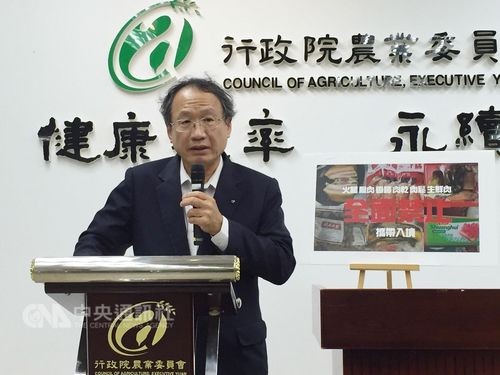 TAIPEI (Taiwan News) – Chinese media has been failing to inform Chinese citizens on the severity of the African Swine Fever (ASF) epidemic, as cases of Chinese travelers coming to Taiwan carrying pork and other meat products continue to be stopped by Taiwanese customs.

On Monday, Dec. 24, the deputy chief of Taiwan’s Council of Agriculture (COA), Huang Chin-cheng (黃金城), further warned that China displays a dangerous lack of information transparency on the ASF outbreak.

According to Taiwan’s Bureau of Animal and Plant Health Inspection and Quarantine (BAPHIQ) under the COA, China has recently suspended a cross-strait communication channel, which has made it very difficult to get information from Beijing regarding the spread of the swine fever virus.

As China appears to be willfully withholding information on the outbreak from the international community and health professionals, most countries and organizations can only receive limited updates on the situation in China.

Only scant irregular and limited reports are available via the public webpage of the Chinese Ministry of Agriculture, and some slightly more reliable reports from the World Organization for Animal Health (OIE).

CNA quotes COA Dep. Chief Huang on China's lack of transparency as saying that the scant information available is of little to no help to Taiwan’s preventative measures and quarantine work, so Taiwan has already committed to an all-out effort to stop the disease from entering the country.

Despite China’s unwillingness to share crucial information that could affect the health of millions, Taiwan’s BAPHIQ is doing its best to maintain an accurate report of the ASF epidemic in China.

CNA reports that as of Dec. 24, the ASF virus has infected pigs in 23 Chinese territories with 100 cases officially reported by the Chinese government, but Huang cautions that the actual number is likely to be much higher.