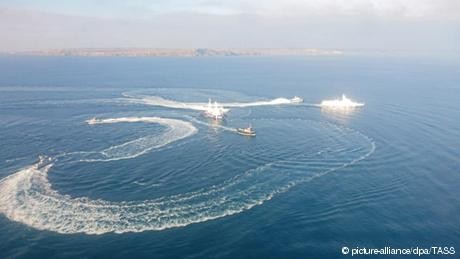 In Russia, the new year will kick off with price increases — the value-added tax (VAT) will jump from 18 to 20 percent. Among other things, the government hopes that this will at least partially compensate for cuts made to the health and education systems.

Authorities deemed these cuts necessary due to the fall of oil and gas prices in recent years — Russia's most important export commodities. The price increase is likely to have a significant impact on the already declining popularity of Russian President Vladimir Putin and his government. The decision to raise the retirement age in 2018 — which was also highly controversial — kicked off a significant decline Putin's approval ratings. While Putin can still be confident that roughly two-thirds of Russians are behind him, the president's towering popularity appears to be a thing of the past. Nevertheless, mass protests are not expected.

Russia's economic development in 2019 is also likely to be hindered by Western sanctions. Although the United States recently restrained from enforcing new, stricter measures, Washington made it clear that there would be no turning back from its sanctions policy.

A fresh rupture in relations between Russia and the US is on the cards for 2019. In February next year, the ultimatum put forth by Washington on Moscow for an alleged violation of the INF treaty will expire. Russia denies the accusation of having secretly developed a prohibited medium-range missile. Political observers predict that both sides will withdraw from the treaty, long viewed as a milestone in nuclear disarmament.

In June next year, another key foreign policy date for Russia is scheduled. Should the country not resume its payments to the Council of Europe by then, it could be excluded from the body. In June 2017, Russia ceased its payments after the Council of Europe parliamentary assembly withdrew the Russian delegation's voting rights due to the annexation of Crimea in 2014. No promise of a compromise solution is as yet on the horizon.

Russia's relations with neighboring Ukraine are likely to remain strained into the new year. Although a large scale war is considered unlikely, the conflict between the two countries, which has already been simmering for five years now, is likely to flare up again.

There is a concern that incidents such as the dispute on the Kerch Strait in November 2018 could happen again. A minor skirmish broke out when the Russian coast guard forcibly prevented two Ukrainian naval vessels and a tugboat from passing through the waterway, detaining the crews in the process.

Read more: Could the latest Russia-Ukraine spat herald another Crimea?

In addition to the annexation of Crimea and the ongoing unrest in the Donbass region, Ukraine's founding of a new independent national Orthodox Church is likely going to be another sore point in the new year. Proclaimed in December 2018 as the Orthodox Church of Ukraine, the organization could in all likelihood be ordained with a kind of deed of incorporation from the spiritual leader of the global Orthodox Church, Ecumenical Patriarch Bartholomew I of Constantinople, on January 6.

Ukraine wants to break free from the dominance of the Russian Orthodox Church and overcome the domestic division within its own Orthodox Church. But Russia has not recognized the creation of an independent Ukrainian church, raising the prospect of a religious tug of war.

Moreover, 2019 is expected to be a decisive year for the future transportation of Russian gas through Ukraine. The current treaty already has an expiration date, but negotiations on a new deal are not yet underway. Russia would like to completely stop gas supplies to the European Union via Ukraine and replace them with new pipelines such as Nord Stream 2. But both the EU and Germany want to ensure that Ukraine remains a transit country; however, negotiations on this are likely to be extremely difficult.

A fateful year ahead for Poroshenko

With two elections on the 2019 calendar — the presidential contest at the end of March and the parliamentary vote in autumn— Ukraine could face significant political turbulence on the domestic front.

Incumbent Ukrainian President Petro Poroshenko is seeking re-election, but at the moment his poor standing in opinion polls gives him little reason for hope. Poroshenko's opponent, former Prime Minister Yulia Tymoshenko, is considered a promising candidate. Nevertheless, her potential presidency poses a great unknown for the country, even if it means remaining on a pro-Western course.

Even more important, however, are the parliamentary elections. The country's constitution stipulates that the government itself is more powerful than the presidency. In Ukraine's recent history, it has often been the case that the president and the government appointed by parliament have been at loggerheads.

The political tension brought about by street protests, and the instrument of pressure that they create, should not be underestimated. Another outbreak of unrest would be a severe setback for the country, which for a long time has been trying to find a way out of crisis mode.