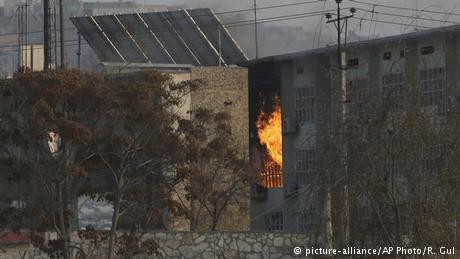 At least 28 people, mostly government employees, were killed during a coordinated militant raid on a government building in Kabul on Monday, Afghan authorities said.

More than 20 others were wounded in the seven-hour standoff with police, Interior Ministry spokesman Najib Danish said.

The brazen assault began in the afternoon when a suicide bomber blew himself up in a car outside the public works ministry. Within minutes of the powerful explosion three gunmen, armed with assault rifles and explosive devises, stormed the building of the National Authority for Disabled People and Martyrs' Families and took civilians hostage.

Afghan security forces evacuated more than 350 employees even as they engaged in a gun battle with the militants. Witnesses reported hearing at least five explosions as police and gunmen traded fire.

Police cordoned off the area as they went carefully from room to room and floor to floor to secure the building. All three gunmen were killed.

No militant group immediately claimed responsibility for the attack. The Taliban militant group has carried out several attacks on government buildings in the past.

This latest attack comes just days after reports that US President Donald Trump was planning to withdraw half of the 14,000 US troops in Afghanistan. Trump has already announced that US troops in Syria would be withdrawn.

The US troops currently make up the bulk of the Resolute Support mission to train and advise Afghan forces fighting the Taliban and Islamic State (IS) militants.