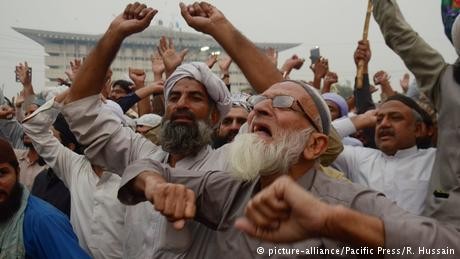 In a landmark decision in October, Pakistan's Supreme Court acquitted Asia Bibi, a blasphemy convict who had been on death row since 2010. Bibi, an impoverished Christian woman and a mother of five, had been accused of blasphemy in 2009 and sentenced to death a year later.

Read more: The case of Asia Bibi in Pakistan

The top court's ruling came as a pleasant surprise for the Islamic country's rights activists and civil society groups, who had been demanding her release for nearly a decade.

The liberal euphoria about Bibi's acquittal, however, turned out to be ephemeral. Islamist groups took to the streets against the court's verdict, chanting "Death to Asia Bibi, death to blasphemers" slogans. The chaos and violence forced Prime Minister Imran Khan's government to strike a deal with the hardline Tehreek-e-Labbaik Pakistan (TLP) party, allowing TLP to file a petition asking the Supreme Court to review its decision.

Bibi was eventually released from jail, but she still cannot leave the country. As Islamists continue to bay for her blood, Bibi has reportedly been placed under "protective custody."

It is unclear when she and her family will be able to leave Pakistan, but most likely she won't be able to spend another Christmas as a free person.

Blasphemy is a sensitive topic in Pakistan, where 97 percent of its 180 million inhabitants are Muslims. Rights activists have demanded reforms to the controversial blasphemy laws, which were introduced by the military dictator General Zia-ul-Haq in the 1980s. Activists say the laws have little to do with blasphemy and are often used to settle petty disputes and personal vendettas.

Bibi was arrested in June 2009, after her neighbors complained she had made derogatory remarks about Islam's Prophet Muhammad. A year later, Bibi was sentenced to death despite strong opposition from national and international human rights groups.

After a hearing on October 8 of this year, Pakistan's Supreme Court reversed two lower court verdicts against Bibi in what was her final appeal against the 2010 death sentence.

In 2014, when the death sentence had been upheld by the Lahore High Court, rights group Amnesty International called the verdict a "grave injustice."

Bibi's is one of the most high-profile blasphemy cases in Pakistan, with international rights groups and Western governments demanding her freedom. In 2015, Bibi's daughter met with Pope Francis, who offered prayers for her mother at the Vatican.

Her husband, Ashiq Masih, had appealed to US President Donald Trump for asylum, along with British Prime Minister Theresa May and Canadian Prime Minister Justin Trudeau.

Can Pakistan set an example?

The year 2018 has thus offered some hope that Pakistan wanted to safeguard minority rights. At the same time, it reinforces the fact that the South Asian country has a long way to go before it reins in Islamists and follows a liberal path.

In a recent speech, Pakistani Prime Minister Imran Khan vowed to protect religious minorities in his country. He even said that Pakistan would set an example for Indian Prime Minister Narendra Modi on how to uplift minorities.

The Bharatiya Janata Party's Hindu nationalist government in India has come under sharp criticism from the country's liberal and secular sections for promoting a right-wing agenda and discriminating against religious minorities. Several cases of vigilante attacks on Muslims have made headlines in the past few years.

PM Khan was actually responding to remarks by renowned Bollywood actor Naseeruddin Shah, who said that the current situation in India was worrisome. But after Khan's "advice" to India, Shah retorted that the Pakistani prime minister needed to focus on his own country and "walk the talk" regarding minorities.

"I think Mr. Khan should be walking the talk in his own country instead of commenting on issues that don't concern him. We have been a democracy for 70 years and we know how to look after ourselves," Shah told The Indian Express newspaper.

The overall situation for religious minorities in Pakistan is far from being "exemplary." Attacks on Christians, Hindus and Ahmadis (who were declared non-Muslims by Pakistani lawmakers in the 1970s) have continued unabated in the past few years.

Not too long ago, PM Khan had to backtrack on his decision to appoint a world renowned Ahmadi economist as part of his advisory team due to pressure from conservative Muslim groups.

Pakistan's Christians and other religious minorities have often complained of legal and social discrimination in their country. In the past few years, many Christians and Hindus have been brutally murdered over unproven blasphemy allegations.

In one case, a young Christian girl with Down syndrome was accused in August 2012 of burning pages upon which verses of the Koran were inscribed. Rimsha Masih was taken into police custody and only released months later, when charges were dropped. The case caused an uproar in her hometown and beyond and sparked riots and violence against Christians in the region. In 2013, she and her family relocated to Canada.

In 2014, a Christian couple was beaten to death for allegedly desecrating a copy of the Koran. Their bodies were subsequently burned in a brick kiln.

In September last year, a Christian man in Pakistan was sentenced to death for sharing "blasphemous" material on WhatsApp.

The Supreme Court's Asia Bibi verdict has, however, paved the way for some legal and constitutional improvements regarding the issue of minority rights in Pakistan.

Read more: Uproar in Pakistan over 'torture and sexual abuse' of Christian youths

PM Khan has an opportunity to turn things around in 2019. Letting Asia Bibi out of the country would be crucial and will be seen as a test case for his government. But more importantly, his government needs to pass laws for the welfare of religious minorities. Will he be able to do that?