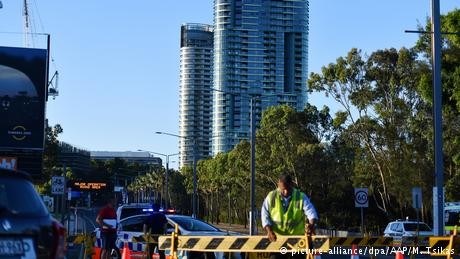 Residents and neighbors of Sydney's prestigious Opal Tower were left waiting Monday, not knowing whether they would be allowed back into their high-rise homes in time to celebrate Christmas.

Nine News quoted one resident as saying he heard a "big bang," like something "snapped" inside. Another, also worried about the tower's safety, said interior doors had begun jamming "a few days ago."

Some had reported "cracking noises" throughout Monday morning, police said in an initial statement.

The Opal Tower with 392 apartments was opened just four months ago as one of five residential towers on Sydney's former Olympic Games 2000 site.

Greg Wright, acting police superintendent for surrounding New South Wales state, said firefighters, engineers and paramedics would "assess what the damage is, and a way forward."

"Police received a call to a loud crack on level 10," Wright said, adding that the checks would not be be done "in minutes. Hopefully it won't take longer than hours,"

Water and gas services were shut off and the tower was being isolated from the power grid, Wright said.

Also evacuated were adjacent buildings, including 55 children from a childcare center. Shelter was being provided in a nearby hall.

A spokesman for the Opal Tower's development company told Australian public ABC broadcaster that the "builder has been notified."