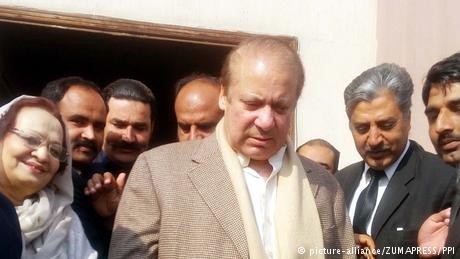 An anti-corruption court in the Pakistani capital of Islamabad sentenced former Prime Minister Nawaz Sharif to seven years in prison for corruption on Monday.

The court acquitted him of charges related to the purchase of upscale apartments in London, but found that Sharif was unable to prove the source of income for the ownership of a steel mill in Saudi Arabia.

Sharif, who was released on bail in September after appealing a 10-year sentence, was arrested after the ruling was announced. He can appeal the verdict.

Prosecutors accused Sharif, who served three non-consecutive terms as Pakistan's prime minister, of possessing assets beyond his known sources of income. The allegations stem from a corruption investigation spurred by the Panama Papers revelations in 2016.

Thousands of activists from Sharif's Pakistan Muslim League party clashed with security forces outside of the courtroom ahead of the decision.

Sharif, who returned to politics in 2013 after spending eight years in exile between 1999 and 2007, has denied any wrongdoing and has claimed he is being targeted by Pakistan's powerful security establishment.

Sharif's daughter, Maryam Nawaz, wrote on Twitter that the government "is afraid of Nawaz Sharif."

Shahid Khaqan Abbasi, Pakistan's prime minister from August 2017 to May 2018, told DW that Monday's ruling was "another black decision in the history of the country."

"There is no evidence and any witnesses against Nawaz Sharif. Al-Azizia steal mill was established when Nawaz Sahrif was living in exile abroad," Abbasi told Haroon Janjua, DW's correspondent in Islamabad.

"The world is mocking us [for] how courts are giving verdicts in Pakistan. It is the first decision in which sentence was announced with doors locked and security officials holding guns inside the court. It's so-called democracy."

It was not the first time Sharif had been removed from office. He was ousted as prime minister in 1993 on suspicions of corruption. After winning election in 1997, he was removed again after a military coup in 1999 and lived in exile for eight years.

Sharif received a 10-year sentence in July on charges revolving around family property in London. He was in British capital at the time of the conviction as his wife received cancer treatment and was arrested and imprison upon his return to Pakistan.

He was released in September after a court suspended his sentence pending an appeal hearing.

Pakistan's current prime minister, Imran Khan, has vowed to tackle endemic corruption in the country since being elected to the post in July.