TAIPEI (Taiwan News) – Two days before Christmas Day, news came from 12,970 kilometers away that Taiwan's expedition team had reached the South Pole after enduring blizzards and temperatures of -30 degrees Celsius for nearly a month, according to a Liberty Times report on Monday.

One of the team members is the well-known ultra marathon runner Tommy Chen, who won The 4 Deserts Race Series in 2016, and the Fire and Ice Ultra 250KM in 2018, among other grueling endurance races.

Chen was on the phone talking with his parents Monday morning, saying, “Pa, Ma, don’t worry. I finished! In the future I should be able to overcome more challenges.” To which, Chen’s parents replied, smilingly, “Don’t take any more challenges.”

The team will start their return journey in a couple of days and will be back to Taiwan on Jan. 8, 2019, the report said. 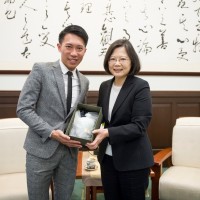