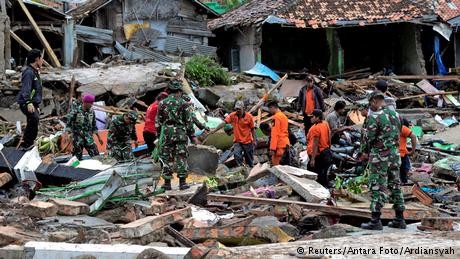 Indonesian rescue crews on Monday searched through debris to find victims from a deadly tsunami in the Sunda Strait that devastated coastal communities.

The death toll from the Saturday night tsunami triggered by volcanic activity on Anak Krakatau island rose to more than 280 with more than 1,000 people injured, the national disaster agency said. At least 57 people are still missing.

"The number of victims and damage will continue to rise," said agency spokesman Sutopo Purwo Nugroho.

Read more: Ring of Fire: Five facts about the most earthquake prone region in the world

Waves between 2 and 3 meters (6 to 9 feet) smashed into beachside buildings on Java and Sumatra without warning, pulling victims out to sea and leaving a trail devastation. Hundreds of buildings were destroyed. More than 3,000 panic-striken coastal residents have been evacuated to higher ground.

The hardest hit area was around Pandeglang, where more aid and doctors trickled in on Monday to help survivors. The Indonesian Medical Association said many of the injured need orthopedic and neurosurgery procedures.

Authorities said the tsunami was likely caused by an eruption of Anak Krakatau volcano, possibly due to underwater landslides as well as an abnormal tidal surge due to a new moon.

Anak Krakatau is a small volcanic island that emerged half a century after Krakatoa's 1883 eruption, which killed over 36,000 people. Indonesia's geological agency said that Anak Krakatau had been showing signs of heightened activity for days, spewing plumes of ash thousands of meters into the air.

"Normally, a tsunami is preceded by large tectonic earthquakes. But the problem is that the tsunami … was not caused by an earthquake this time. However, the information from the geological agency reveals that there have been tremors around Mount Anak Krakatau since June," Muhamad Sadly from Indonesia's disaster management agency, BMKG, told DW.

Saturday's tsunami was reminiscent of several similar disasters that have struck the vast Indonesian archipelago, including the massive earthquake and tsunami in 2004 that killed 226,000 people in 13 countries, including more than 120,000 in Indonesia.

In October, some 2,000 people died when an earthquake and a tsunami hit Sulawesi. A powerful earthquake on the tourist island of Lombok killed 505 people in August.