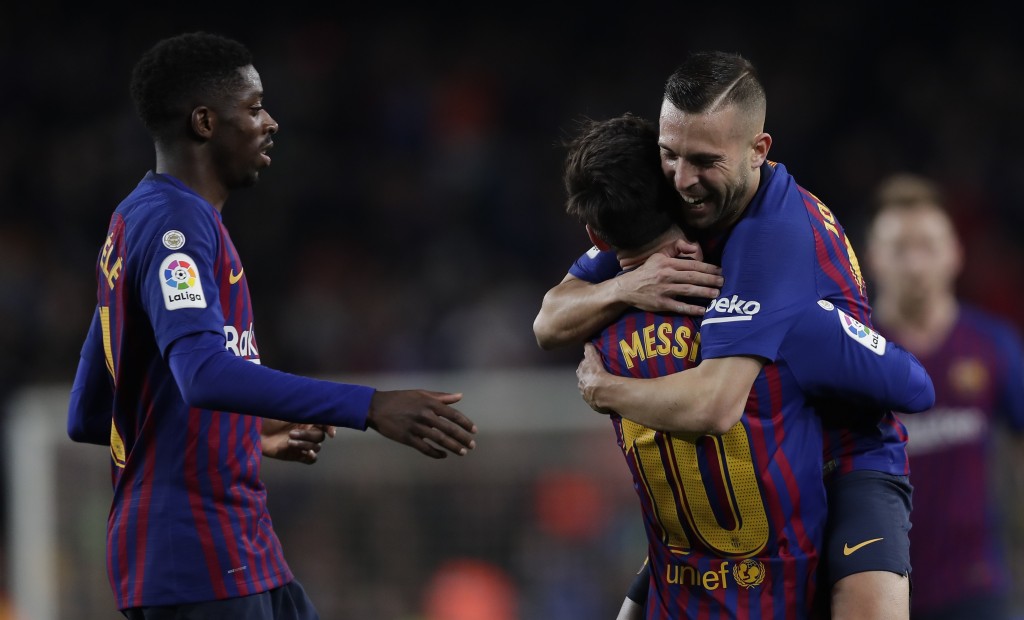 BARCELONA, Spain (AP) — With Lionel Messi wowing fans game after game, it's easy to overlook Jordi Alba, the player who often puts him in position to score so many impressive goals.

"Leo and Jordi understand one another perfectly," coach Ernesto Valverde said after Saturday's 2-0 win over Celta Vigo when Alba helped set up both of Barcelona's goals.

Alba first passed for Messi to shoot, with a rebound of a save falling to Ousmane Dembele to finish off. Alba then assisted Messi for his league-leading 15th goal of the season.

"Their relationship clicks," Valverde said. "Sometimes rivals try to block their passing angles, but Jordi has a great sense of timing. And even though adversaries know it's coming, it continues to work."

Alba has been running up and down Barcelona's left flank for seven seasons now, but his importance to his team's attack used to be secondary to the sparkling play of former stars Neymar, Andres Iniesta and Xavi Hernandez.

Neymar's exit two summers ago marked a turning point for Alba. With the Brazil forward no longer soaking up all the weight of the attack on Barcelona's left side, Alba was free to fully exploit his speed and passing ability.

As Alba told Spanish sports daily Sport in 2017, "now I have the entire left side to myself, and that is much better."

Messi often starts his attacks from the right or center of the field to have his preferred left boot set to shoot. That leaves Alba in an ideal position to stretch the defense with carefully timed bursts of speed to break into the area behind the opposition's backline, often after exchanging passes with Messi.

The 29-year-old Alba has developed the knack of knowing where Messi will dart to in the box, often behind a dummy run by Luis Suarez, where he can receive Alba's passes in a scoring position.

"They are very quick moves against defenses that really close down the open spaces," Alba said after Saturday's strong performance. "But Messi always waits for the opportune moment to find space, and I connect with him."

Alba has done his part in ensuring Barcelona went into the Spanish league's winter break with a three-point lead atop the standings.

"Most of the passes that I give Messi end up in goal," Alba said. "Leo never misses."

Hernandez has been linked to interest by Bayern Munich in triggering the 80 million euro ($91 million) buyout clause that would free him from his contract.

While Atletico has denied that Hernandez wants to leave, coach Diego Simeone appears to accept that he could lose the 22-year-old defender.

"Lucas knows what I told him. I love him a lot, we have watched him grow up," Simeone said after Saturday's 1-0 victory over Espanyol. "Let him decide what he thinks is best and I will support him."

Thomas, who can play either as a holding midfielder or further up in the formation, has also made it publicly known that he wants to play more.

"I have a deep affection for Atletico and I am grateful for all that it has done, as well as for the fans, but sometimes I feel unhappy at Atletico," Thomas said Saturday.

Llorente has started nine matches since Santiago Solari took over from the fired Julen Lopetegui two months ago, benefiting from Casemiro twisting an ankle.

Llorente scored his first goal for Madrid on Saturday when he struck a powerful shot from outside the area to help beat Al Ain 4-1 in Abu Dhabi. Madrid won its third straight Club World Cup.